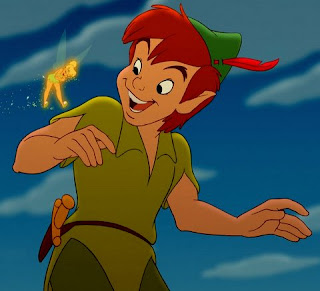 When I was a child I loved the story of Peter Pan....the boy who refused to grow up.

So much so in fact that when my parents took me to a production in Edinburgh at the age of eight....and I saw that Peter was played by a GIRL!!!!

So you can imagine how happy I was to read this story.

Desmond Morris, who became a bestselling author by applying zoology to explain human behaviour, has now utilised the techniques to put forward an explanation for homosexuality.

In his latest book, The Naked Man, he concludes that men are “made gay” because they retain infantile or juvenile characteristics into adulthood – a phenomenon known as neoteny.

Wow!! EXCELLENT. It turns out we are ALL Peter Pans and we didn't even know it!!

Although I must admit the rest of this dubious theory does seem quite flattering.

According to this theory, gay men also tend to be more inventive and creative than heterosexuals because they are more likely to retain the mental agility and playfulness of childhood.

“The playfulness of childhood is continued with certain people into adulthood. This is very much a positive. Adult playfulness means that certain people, often a fairly large proportion of them gay, are more inventive and curious than heterosexuals.”

Yes that MUST be true. As Sébastien always says as he tucks me into my cradle at night: "Just be thankful for homophobia Simon...because it helps keep you young."

Although maybe having to fight for your own freedom all your life....or not hating others like they hate you....does keep you young. So we can run faster than the homophobes can.

And this theory at least isn't as stupid as the mummy loved you too much and daddy didn't love you enough one.

But I do want to make it clear that despite my inner child I do want to grow up. In fact I can't WAIT to be a really mature and serious and wise gay old man.

Hmmm. Wait a minute. Hold the wire whisk. Did I REALLY say I want to grow up?

I change my mind.

And let's go back to Neverland...