Global Warming and the Threat From the Deep 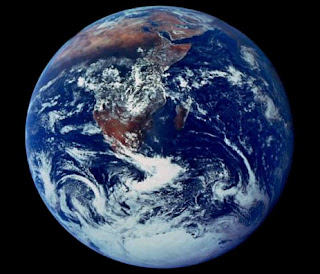 When you stare at our beautiful, but small and fragile planet, it's not hard to imagine how life could be wiped out by an all-out nuclear war....or a collision with a giant asteroid.

But what if the threat came out of the blue? What if the planet itself was able to exterminate life?

What if it already had?

New geochemical evidence is coming from the bands of stratified rock that delineate mass extinction events in the geologic record, including the exciting discovery of chemical residues, called organic biomarkers, produced by tiny life-forms that typically do not leave fossils. Together these data make it clear that cataclysmic impact as a cause of mass extinction was the exception, not the rule. In most cases, the earth itself appears to have become life's worst enemy in a previously unimagined way. And current human activities may be putting the biosphere at risk once again.

The evidence suggests that as greenhouse gases released by huge volcanic eruptions raised global temperatures oxygen levels fell in the oceans. And that allowed a deep ocean bacteria to bloom and rise to the surface...releasing massive bubbles of toxic hydrogen sulphide gas that devastated life on earth.

But could it happen again?

The so-called thermal extinction at the end of the Paleocene began when atmospheric CO2 was just under 1,000 parts per million (ppm). At the end of the Triassic, CO2 was just above 1,000 ppm. Today with CO2 around 385 ppm, it seems we are still safe. But with atmospheric carbon climbing at an annual rate of 2 ppm and expected to accelerate to 3 ppm, levels could approach 900 ppm by the end of the next century, and conditions that bring about the beginnings of ocean anoxia may be in place.

But is that scenario too optimistic?

The U.N.'s climate change panel has predicted that CO2 levels could reach 550 ppm by 2050. But what if carbon dioxide levels rose faster than that? And didn't just continue to rise steadily. But suddenly jumped.

Same thing for the rain forests which we continue to destroy. Studies now show that rising CO2 levels can inhibit not enhance plant growth...like we once thought. So they won't be able to absorb as much carbon dioxide either.

What if almost ALL the carbon dioxide we produce went into the atmosphere?

What if rising temperatures caused vast amounts of methane gas to escape from the melting permafrost of Canada and Siberia?

The sudden melting of a bog the size of France and Germany combined could unleash billions of tonnes of methane, a potent greenhouse gas, into the atmosphere.
What if what we thought was a steady and predictable increase....turned into an unpredictable....and unstoppable.... chain reaction?

I guess what I'm trying to say is when the world leaders meet in Bali to discuss how to stop global warming they better be super serious and VERY careful.

Because here's the thing. The reason we didn't figure out sooner what really caused those mass extinctions....was that the tiny killers didn't leave a fossil record. We couldn't see them...so we didn't know what happened.

Which makes me wonder what other hidden threats are lurking out there? What else don't we know?

And should remind us all....to demand that our political leaders in Bali take immediate action NOW before it's too late. If only just in case.

Because what we know is scary enough.

But what we don't know could KILL us....

P.S. If we want to help save Canada AND the planet....

" It would take more than one letter to explain what’s wrong with Kyoto, but here are a few facts about this so-called “Accord”:
— It’s based on tentative and contradictory scientific evidence about climate trends.
— It focuses on carbon dioxide, which is essential to life, rather than upon pollutants..."

nice post, simon....very interesting read. gee, i never thought i might leave this planet because of the big blue flame :D.

but Mamma Earth is fighting hard to get us parasites off her back , shake the mange off . She'll always live on....we just won't. ain't She marvellous?

Hi Scout!! Thanks. You know the more we learn about the planet...the wiser native people appear to be. They always had this kinship with the earth...while the white people worshipped some crazy notion of heaven.
In a mystical sense it's almost like Mamma Earth is a living organism....with more power to decide what happens to these greedy parasites than we ever imagined...

Good post Simon - I had read a little about this some time ago but can't recall where, interesting.
_______________
p.s. Canada now staring as the (not) leader. More here in the leaked document

Hi sassy!! thanks for the links. Yes the thermal extinction theory came out a couple of years ago...but new data on the southern oceans and carbon basins is making it less academic and opening up a whole new chapter in deep ocean exploration.As for Canada's role and the damage to its reputation it bothers me a lot. Especially since I've got one foot in Europe and I have to put up with the shock and disappointment of people over there. If more Canadians were aware of that they'd understand the damage these hideous Cons are doing...