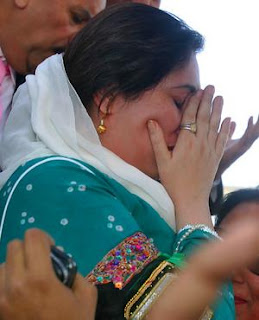 Now she belongs to history.

And history will decide whether she might have saved Pakistan...or just helped sink it. Whether she was a secular martyr who heralded a new age of democracy...or just another lousy Pakistani politician incompetent and corrupt.

But nobody will be able to deny that Benazir Bhutto was really brave.

She was attempting to make the connection between lack of democracy in Pakistan and the rise of mullah-manipulated fanaticism.

And, right to the end, she carried on without the fetish of "security" and with lofty disregard for her own safety. This courage could sometimes have been worthy of a finer cause, and many of the problems she claimed to solve were partly of her own making. Nonetheless, she perhaps did have a hint of destiny about her.

A woman of destiny in a failed state going nowhere.

As for who gave the orders to kill her? The way they cleaned up the crime scene with fire hoses I'm sure we'll never know.

But it doesn't really matter. Because we all know where the young man who actually killed her almost certainly came from.

From one of the thousands of madrassahs run by religious extremists who turn little boys into suicide bombers. So Pakistan's corrupt generals and sinister intelligence services can use them as a proxy army in Kashmir and Afghanistan.

“Even before you blow yourself up, virgins come to the site of the explosion and wait to take you to Paradise...”

The religious fanatics already hated her for being modern, secular, and of course for being a woman. But by vowing to reform or shutdown the radical madrassahs...and threatening the mullahs AND the generals.... Benazir Bhutto almost surely sealed her fate

Still, the secular generals who make up the high command of the Pakistani army must be sipping their scotches nervously in the garrison town of Rawalpindi tonight.

Ever since they sent off the first wave of jihadis to battle the Soviets in Afghanistan...and all those American billions started pouring in..... they've acquired incredible power and wealth.

But now the suicide bombers are amongst them. The killer children they nurtured with the help of crazy religion are turning on their own. And you can't put those kind of demons back in a box once you've let them out.

Today they came for Bhutto..... tomorrow they could come for them. And their nuclear weapons.

Which means that the Great War on Terror just got more complicated... and a lot more dangerous.

Although in one way it's simpler now. The writing is on the wall. Either Pakistan starts destroying religious fanatics instead of breeding them. Or they'll destroy Pakistan.

Poor brave Benazir. She never really had a chance. And she was a really flawed martyr.