Aqsa Parvez and the Curse of Religion 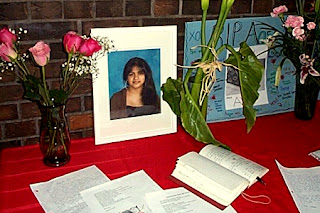 Nobody could save her. But everybody has a theory about why she died. The right wing hatemongers are blaming immigrants and Mooslims.

We used to be rude to every immigrant that came to Canada, with the result that most of them got their acts together and assimilated.

Only recently have we begun telling immigrants to maintain their own traditions, and the result is a dead Muslim girl.

If they are wearing "traditional garb" but "don't necessarily want to do so" -- their "masters" will soon come around when we start shunning them everywhere they go.

Other more rational people are pointing at the immigrant experience.

And the head of the Canadian Islamic Congress says it's just a "teenager issue."

But of course the REAL problem is religion.

All of the major ones were written by hairy, superstitious , monumentally ignorant desert dwellers who believed that men were made to rule the world. Or at least the tent where they lived with their camels...and their fifty wives.

And that women were born to serve them. 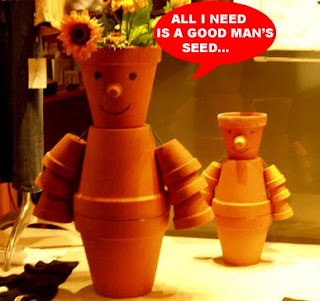 I mean just checkout what the mad medieval monk in the Vatican is raving about this week.

Nuclear arms proliferation, environmental pollution and economic inequality are threats to world peace -- but so are abortion, birth control and same-sex marriage, Pope Benedict XVI said in a statement released by the Vatican Tuesday

You can't get more patriarchal.....or INSANE than that.

The question is what do we do about it at a time when all over Canada clashes between religious and secular values are fuelling a sometimes ugly debate....before it degenerates into something even worse?

My suggestion? The opposition parties should come up with this kind of motion:

Whereas we in this country believe that everyone should have the freedom to practice the religion of their choice. And we encourage all Canadians to accomodate their differences in a reasonable way. We also strongly believe that if and when religious freedoms collide with human rights, the human rights of Canadians must ALWAYS prevail.

It would draw a line in the sand and send out a powerful message to everyone living here...and those still to arrive That's the kind of Canada we want and if you don't like it too bad .....or don't come.

A bit like this symbolic message Quebec sent out today.

Until the curse of religion is lifted off our backs...and we have a truly secular society....women will never be equal. Girls like Aqsa Parvez will be continue to be abused or murdered. So will gay people. And the world will just get crazier and crazier.

Of course..... I realize it would be a horrible blow to Stephen Harper. He would have to choose between supporting the motion...and losing his religious base.

Or opposing it and losing Quebec and other parts of Canada.

Which means either way he would probably NEVER form a government again.

But hey...if you're trying to head off an ugly problem. Trying to make sure that what happened to poor Aqsa never happens again.

And you end up getting rid of an ugly government....full of religious fanatics.

This has ABSOLUTELY nothing to do with Islam.

When will the accountability for world unrest and death be placed where it belongs, on the backs of the leadership of these ridiculous religions. How in the world can anyone take someone like Pope Razi seriously, preaching and judging about morality, sexuality and environmental science, three things that hideous creep knows nothing about. Yet, millions listen to his tripe. Therein lies the problem.

Hi Leonard...thanks. It's such a sad story.I feel bad for everyone including her father. Here he is driving a cab struggling to support a family in a new land only to see his daughter become part of it...and feel that he is losing her and that she is losing her culture and her religion. That doesn't excuse what he did of course. But apart from everything else I mentioned in my post ...in a country of immigrants we need to see this also as an immigrant story and few new ways to provide support and help people to adapt to their sometimes bewildering new home. As I mentioned on your blog as an immmigrant I know that it can be difficult for ANYONE...

Hi Mujahideen...thank you for your comment and for the link. I realize that it's a cultural thing...as well as an immigrant story...and even a teenage story too. And I don't think other Muslims in Canada should be singled out or blamed for it. I also seek ways to foster understanding between all Canadians. However, as an atheist my belief is that ALL religions are patriarchal and in practice at least make women subservient to men. And that by so doing they prop up these cultural traditions and contribute to the problem.You have your beliefs I have mine. And thank you again for your contribution. The more intelligent and reasoned debate we can have the better it will be for everyone...

Hi waterboy...yes I agree. Although as you know I am an atheist because I have a scientific mind (believe it or not!!) and I just can't will myself to believe that kind of stuff. I also know that there are good religious people who don't go around judging people...they just try to help them or relieve their suffering. But unfortunately all the major religions have been hijacked by extremists who are turning something that could be good into something evil.
the truth is as much as I would like to get them to change their crazy ways....it's going to be the moderate good religious people who are going to have to take matters into their own hands.
But the way things are going I'm not optimistic. I mean can you BELIEVE that crazy Pope?