Iraq, Pakistan, and the Ghost of Saddam Hussein

Trying to find something positive in Iraq is like looking for the proverbial pony.... in a mountain of bloody manure.

But this has to be good news.

Especially since Osama Bin Laden is so worried.

"Our duty is to foil these dangerous schemes, which try to prevent the establishment of an Islamic state in Iraq..."

So you know it's got to REALLY hurt.

And what must hurt the most is the fact that Al-Qaeda is being expelled from Iraq not by General Petraeus....although he deserves some credit.

But by their fellow Sunnis .....and the ghost of Saddam Hussein. 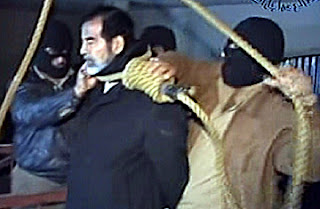 Hussein was a brutish dictator but he was a secular one. So in the late seventies when Saudi Arabia started building Wahhabi religious schools or madrassas all over the world, they couldn't build any in Iraq.

Which meant that although the country was extremely sectarian, the common culture remained secular...and nationalist. And the stateless religious fanaticism that Al Qaeda depends upon never took root.

So while at first the Sunnis were glad to have the foreign fighters on their side...it didn't take long before their fanaticism and indiscriminate brutality turned them off.

Which is why after the Americans leave...and the Shiites and the Sunnis and the Kurds work out a power sharing agreement with or without a civil war...Iraq might have a chance of being a modern secular nation one day.

It allowed the Saudis to build thousands of religious schools. Its corrupt military used them to provide the Taliban with recruits and suicide bombers. So now Pakistan is crawling with religious fanatics...including many in the armed forces.

Nobody is safe. And anything could happen.

Some US intelligence analysts fear Benazir Bhutto's assassination could be part of a broader al-Qa'ida and Taliban offensive against Pakistan's secular leadership, focused on spreading militant influence inside the country. Success in this endeavour would pose a direct threat to the US and the broader Western world.

So much for the Great War on Terror.

Let's see if I can get it straight.

To get back at the religious extremists who attacked America, Bush and his neocons invaded the only secular country in the Middle East...and turned it into a magnet for religious fanatics. They never got Bin Laden, but they allowed the Taliban to regroup in Afghanistan, turn Waziristan and other barbarous places into safe havens for Jihadi terrorists. And they helped create the conditions for Al Qaeda to destabilize Pakistan .... the only Islamic country with nuclear weapons.

And now it turns out that the most powerful weapon in the fight against Al Qaeda in Iraq, and the main reason it hasn't turned into another Pakistan, was the ghost of the man they hanged.

Spare a thought for the old dead tyrant.

I suppose with the bullshit we have to deal with in the name of killing Saddam, he comes off like a bit of a pathetic old softie compared to what walks in his wake. Oh man, we’re screwed.

We can make it better. Happy New Year to you and Sebastien.

Things will get better, they have to.

Hi Bruce!!! Happy New Year to you too!!!
As for Saddam....I think the Americans have learned the hard way that the old butcher was sitting on a time bomb...the fact that Iraq is a British invention and is really at least THREE countries not just one...

Hi JJ!! I think you're right. After so many years of war and suffering the Iraqis are a pretty tough people. But even they got tired of the senseless slaughter perpetrated by these Al Qaeda animals. Which is of course the best thing that could happen. Because if the Muslim world is able to shun these fanatics...as no foreign army could...that's the best thing that could possibly happen. And would do so much to bring peace to the world. I'm keeping my fingers crossed... :)