Omar Khadr: When will Canada Act Like a Country? I was glad to see that some people still think that Canada should act like a real country and bring Omar Khadr home.

The Canadian Bar Association is urging Prime Minister Stephen Harper to demand the United States release terror suspect Omar Khadr from Guantanamo Bay and return him to Canada to face a fair system of justice.

And that judging from his lawyer,U.S. Lieutenant-Commander William Kuebler, there is still hope for the United States.

....Lt.-Com. Kuebler said it is inexplicable that Canada has stood by silently while a citizen whose alleged crime was committed while he was still "a child" is being systematically railroaded by a lawless regime.

But what does it say about Canada when an American officer has to tell OUR government that it should have the guts to take on HIS government to protect OUR kid?

I've written about Omar Khadr The Guantanamo Kid before.... and what a national disgrace his continued imprisonment in that monstrous gulag is...so I won't repeat myself.

But let's just sum up the facts...

He's dragged off to terrorist training camps when he was just a boy by his crazy terrorist father. His father is killed, one brother is crippled, another one was locked up. His mother is a crazy religious fanatic.

At the age of fifteen he gets involved in a firefight with a group of American special forces. He is wounded when planes strafe and bomb the compound. But when the Americans approach the smoking ruins he still manages to toss a grenade that kills a fighting soldier.... who doubles as a medic.

He is shot three times by other soldiers. When they approach him he begs them to kill him. But he survives only to be locked up for years and tortured in Guantanamo Bay. His body is still scarred...he is full of shrapnel and blind in one eye.... and now his mind is going.

The last time his lawyer visited him all he asked for was a colouring book and some crayons. 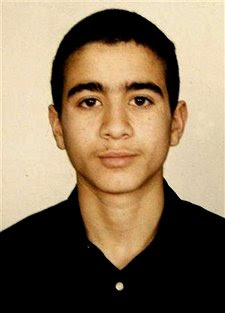 He should be brought back to Canada IMMEDIATELY and detained and treated until he is well enough...and safe enough to be released. No matter what anybody thinks about him ....or his Al Qaeda family....it's the only DECENT and Canadian thing to do.

Britain and other countries have demanded the release of their Guantanamo detainees.

But still we do NOTHING because we don't want to upset the lawless and criminal Bush administration.

Even though Omar Khadr is a CANADIAN KID.

What stinking hypocrites it makes us look like. We make such a fuss about the plight of child soldiers in Africa and elsewhere. But we forgot about our own. We forgot about Omar.

Even though when he killed that American soldier HE was just a child, with crazy parents who led him to where a Canadian teenager never should have been, instead of protecting him.

I mean really....what kind of country of yankee flunkies are we becoming? Is a country that can't even protect its young people even a real country?

How HOLLOWED OUT are we?

When the Bush administration is history and people realize they have to think with some sense, these problems will be solved, albeit too late.

Of all the so-called progressive nations on earth, Canada with its present government is too afraid to ask for our people back. The rights of our citizens are no match for the dreams of our leaders these days.

Sorry, but the whole Khadr family should be shipped back to their Al-Qaeda camps.

They have confessed to being terrorists (the mother even saying on CBC that she would love for her sons to die as martyrs).

My question is not whether Omar should be brought back, but rather, when is our government finally going to strip them of their fraudulently obtained Canadian citizenship?

Equally sickening is the number of people running around and carrying on about how Omar is a terrorist, completely avoiding how he ended up in the company of the extremists, completely ignoring the fact that he is a Canadian, and most of all ignoring the fact that he is a child...and it seems from some articles written about him that his mental/emotional age is a bit behind his physical age, which is no suprise given where he is and has been...

Werner....Omar was born in Ottawa, CANADA...That makes him a Canadian whether you or anyone like it or not. I agree his family is like the Al Qaeda version of the Munsters. But that doesn't change anything. He was a boy when he was dragged off to Afghanistan, he has spent too much time in a terrible place, and if we are to be a real country....and not American stooges...we must do the RIGHT thing.

werner patels is one of those critters in life whose only purpose is to argue that black is white while trying to pass himself off as a moderate intellctual. This is what we call a waste of time.

Did I say that out loud? Yes I did.