Gay Pride and the Idiot Bigots of Truro 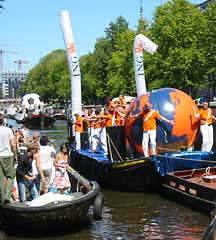 So let's see....in Amsterdam more people than ever before turned out for the city's Gay Pride parade.

And for the first time ever there was a Gay Teenager's Boat. 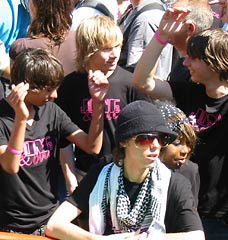 The initiator of the teenage gay boat, 14-year-old Danny Hoekzema, said the participation of teenage gays was necessary to ask attention for the position of young gays.

And how about the Hetero Boat that carried the political message of the day: Amsterdam says no to anti-gay violence.

'We are participating in the gay parade as heterosexuals because we are proud to live in a country which accepts homosexuality,' one of the sailors said.

Meanwhile in Vancouver..... a record crowd of gays and straights turned out for that city's Gay Pride Day.

Rainbows, water balloons and gay rights were front and centre Sunday at the 29th annual Vancouver Pride Parade as an estimated 385,000 people watched the spectacle dance down streets in the city's densely populated West End.

Isn't that terrific? Way to go Vancouver!!!! You're not just pretty...you're BEAUTIFUL.

And then......on the other end of the scale....at the shitty end of the stick....impaled in a darker time... there's the redneck dump of Truro, Nova Scotia. Where we can't even fly our flag at City Hall. Because the wingnut mayor says God wouldn't approve.

"God says I'm not in favour of that and I have to look at it and say, I guess I'm not either...if I have a group of people that says pedophiles should have rights, do we raise their flag too?" 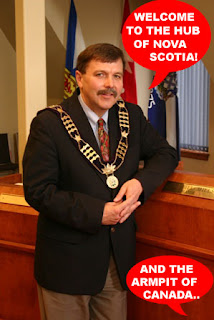 When I saw the story my Scotian temper flared up....but my heart sank. What a way to test my new resolve to keep to the high road. I thought I'd have to spend a whole bunch of time on a beautiful day trying to explain what gay pride and gay flags are all about....to an ignorant bigot.

As well as explaining the difference between gay people and criminals...

Which probably would have annoyed me so much I would have fallen off the wagon...and suggested that the moron stick his Monkey God where the sun never shines. You know me.

But luckily....for all of us.... I didn't have to. Because this blogging brother said it better than I ever could:

My take is simple: Pride flags exists because pride is the opposite of shame, which is precisely how people like Mills would have us gays feel. The “lifestyle” I’m supposedly flaunting is, in reality, no different from anyone else’s, but there’s a lot I’ve had to put up with. Pride is a fitting symbol: I am proud of having overcome the misinformation I was fed over the years about gay people; I’m proud of overcoming the personal struggle to accept who I am; and I’m especially proud of how I continue to overcome ignorant policy-makers, lobbyists, journalists, individuals, and churches who don’t hesitate to attack me at every opportunity.

Raising the Pride flag is not an “endorsement” of any particular lifestyle..... Rather, it’s a gesture of dignity and recognition of a minority’s struggle that, if refused in this manner, re-enforces the purpose of why that symbol exists

Mayor Mills may not care to see the Pride flag one week a year, but I have to put up with discriminatory nonsense all the time.

Isn't that the TRUTH? Good for you Mark. NOBODY could say it better than that.

And thanks for saving me all that trouble and time ....so I was able to enjoy the afternoon....dance to the steel drum music of Caribana....and even go shopping.

For a pair of these gay-friendly jeans....

It's just that the people at Levi's aren't stupid...unlike the Council cretins of Truro and their bigot mayor.

Smart people know that everything is better for ALL of us....when this world is for EVERYONE.

The day that happens EVERYWHERE we won't need a Gay Pride parade. We won't have to wave our beautiful rainbow flag of freedom all the time...as we fight off our many enemies. To let them know we're NEVER giving up.

Until then we do.

And the best thing is...... I don't have waste any more time explaining that to anyone anymore. All I've got to do is quote Mayor Moron.

And thanks Mark for telling him like it is....and saving me all that work.

Now I'm putting on my new jeans and my dancing shoes.

And getting back to the Caribana Party... 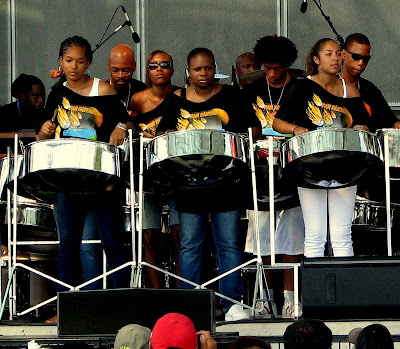 And it's beautiful too...