Iggy's Mea Culpa and the Sad Fate of Dion 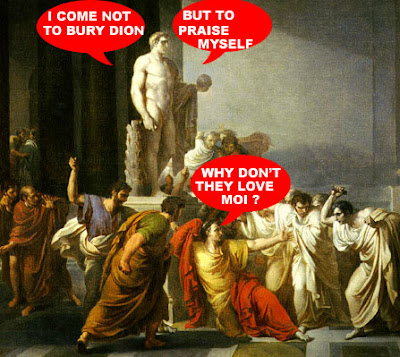 Uh oh. It looks as if the power struggle between the two wacky professors Dion and Ignatieff is starting to resemble a high school production of Julius Caesar. You know the kind where even as they're skewering Caesar ....you can't stop laughing.

I mean Ignatieff may be positioning himself for Dion's fall. Which is at least a political tragedy. Sob.Sob.

But you have to admit the first act was hilarious.

Where the lugubrious Count Iggy spends about two seconds blaming his noble emotions for supporting the Bush administration's criminal attack on Iraq.

The lesson I draw for the future is to be less influenced by the passions of people I admire — Iraqi exiles, for example — and to be less swayed by my emotions.

Another two seconds admitting he didn't know what he was doing because he lived in an academic cuckoo hatch.

As a former denizen of Harvard, I’ve had to learn that a sense of reality doesn’t always flourish in elite institutions. It is the street virtue par excellence. Bus drivers can display a shrewder grasp of what’s what than Nobel Prize winners.

And the rest of the article blabbing on about his leadership qualities....and why he's just the kind of loser leader we need. Because being wrong is.....um......GOOD.

Democratic peoples should always be looking for something more than prudence in a leader: daring, vision and — what goes with both — a willingness to risk failure. Daring leaders can be trusted as long as they give some inkling of knowing what it is to fail.

Blah blah blah. What a load of self serving tripe. Talk about glorifying failure. We need a yankee loving neocon wonk who didn't even know that Iraq was a ticking sectarian time bomb.....

.....like we need a hole in the head....or Stephen Harper...or a bus driver running this country.

But it gets worse. His phony mea culpa also includes an attack on those who were smarter than him....and an argument for staying the course in Iraq. As this blogger points out.

Ignatieff here is repeating the Bush-Cheney lie; the mantra that "we all got it wrong," therefore "we" are all blameless. It is just a device to deflect accountability for the disaster. A person with Ignatieff's intellectual gifts knows he is deliberately making a bogus argument to shield himself from responsibility. That doesn't sound like a mea culpa to me.

Nope. Just what we need....another guy like Stephen Harper...who can never REALLY admit he's wrong. On the other hand neither can Stephane Dion. And if I was him I'd be really concerned about this Ignatieff quote:

Because Dion suffers from the same condition. The same mix of arrogance and stupidity. 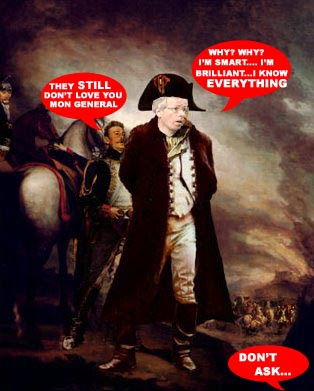 And if politics is theatre...then he's a BUST. In Ontario a lot of Liberals aren't exactly falling over themselves to flip hamburgers with him. They're running for cover. And in Quebec it's even worse.

In French Quebec, the most recent polls show the Liberals to be mired firmly in third place, and the native son Dion to be the least popular party leader in Parliament.

"When the Liberal leader trails an Albertan Tory, a Toronto NDPer and a separatist on the best-PM measure," SES Research pollster Nik Nanos recently wrote for Sun Media, "it has to be pretty grim."

Very grim. And it's not going to get any better either. In Quebec they hate him for being a centralizing English stooge. A ridiculous wonky academic who lives in a cloud cuckoo land just like Ignatieff. The son of Leon Dion the well known nationalist professor....who came up with the expression "putting a knife to the throat of English Canada."

The son who has spent his political life overcompensating for daddy.....and treating Quebecers like children. The kind of guy who would muse about the meaning of nation on the day of Quebec's Fete Nationale. In short an idiot.

Meanwhile in English Canada they hate him for being too French. You can't get more fucked than that.

The poor Liberals can cling to their delusions....but sooner or later the knives WILL come out. Which means the rest of us should worry about this Ignatieff quote:

To bring the new into being, a politician needs a sense of timing, of when to leap and when to remain still. Bismarck famously remarked that political judgment was the ability to hear, before anyone else, the distant hoofbeats of the horse of history.

Hmmm.....if Dion is Caesar waiting for the first knife in the back?

Who do you think ......despite all the evidence to the contrary...fancies himself as our Bismarck?

Can't you smell the horseshit already?

Is this a crazy world or what?

fucking Iggy. before it was even announced that he was thinking about getting into Canadian politics, I smelled a shit-stained rat whenever his name came up.

one of my aunts said around the time that he hade his debutante party that she thought he had been in America so long he had forgotten what it was to be Canadian...and now he's behaving more like a Bush bath-house boy than ever. sheesh.

Hi Jay!! you know I'm for the ANYBODY BUT HARPER PARTY...and I certainly don't wish bad things on the Liberals...and I was prepared to cut Ignatieff SOME slack. In the name of we're all human etc etc. But accusing those who were against the war of being blinded by ideology, instead of guided by better moral values or just plain smarter...and hinting that maybe just maybe if the U.S. stayed the course they might just might get it right...is just TOO outrageous.
And then there was all that pompous farting about leadership which only revealed how much he loves himself (or how stupid he thinks we ignorant hosers are)OMG if he keeps this up he's going to have to wear a neck brace and put weights into his shoes to keep his mammoth expanding head from toppling him like Humpty Dumpty...oh yeah after Julius Caesar I fear that's next.. :)