Libel Chill: How to Blog and Stay out of Prison 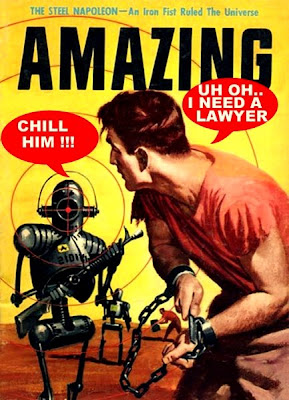 I see that alarm bells are going off in the Canadian blogosphere about how to blog and NOT go to prison.

And all that talk of libel chill has some bloggers running for cover...others deleting old posts...or just posting safe stuff.

Wow! I mean Good Golly Little Miss Muffitt !! If that's not safe I don't know what is....

But here's the spider that sat down beside her. If we can't even keep our blogosphere free, filthy,and uncivil I'm afraid this country will die of boredom. It's already so dull, plodding, and earnest it's practically TERMINAL. Snore....remember to keep breathing....zzzzzzz...

So I'm suggesting some simple rules that should allow us bloggers to stay in the gutter....but out of jail.

Number one. DON'T accuse people of committing criminal acts. Especially if they haven't .That's always a bad idea. Unless you have more money and better lawyers than they have. Or you can buy or blackmail the judge for having sex with you...or even better with your very young sister.

Two. Always insult your enemies in a filthy but CLEVER way.

Like calling them whores of Babylon .....or Satan suckers......or Jesus fuckers. And when they sue you.. demand that they prove they're not.

Or use exotic languages like Scottish slang to hose them down with insults like choob chookters....peelly-wally pie eaters...or my fave.... cuntybuggeryfucktoleybumshiters.

And then claim it's just a CULTURAL misunderstanding. Wot?

Although you don't have to worry about calling the Big Blue Bigot a BAMPOT BALLOON (a mildly unhinged person with an exaggerated sense of his or her own importance.)

After this EVERYONE knows that.

Just like Big Blue, Kathy Shaidle, most of the Blogging Tories....and all of Venereal Dominion will eventually do....and no doubt get off. Just like I will. And I'm sure you can too.

Um.......did I mention Steve Janke? He tried to play journalist and look what happened to him.

Thanks to Wanky, my dog is living on organic roast beef and rib eye steaks. And I'm so paranoid I'm brushing my teeth with laundry detergent ...made in Uzbekistan. Is that OK Steve?

But seriously folks...the main thing is to make sure that the blogosphere doesn't get TOO respectable. I find this rush to respectability and mainstream acceptance far more of a threat to free expression than libel chill could ever be.

What I find amazing about the internet is not the individual brilliance I occasionally encounter....or the mindboggling mediocrity out there. But the awesome TOTALITY of it. The millions of monkeys screaming into the void. Crawling on all fours through the gutter...smoking their enemies with words.

So I just want to make a couple of things absolutely clear.

And two....even if I get that plane....I WON'T be joining the flight to respectability. I wouldn't know where to go.

While not being able to run REALLY gay videos like this one....

But if I can find an even worse/greater video by Gay Pimp....if that's possible.

I PROMISE to run it too.

See you all in prison.

Have a great weekend everyone!
Posted by Simon at 1:57 PM

What about calling someone a "felcher"? Or "space docker"? Izzat ok?

LMAO, well done Simon. I don't understand much about this whole "libel chill" business. I watched something on TV about it the other night, but it was 3am so it didn't sink in.