I was scrolling through Progressive Bloggers today when I came across two posts. They were only separated by a few inches on the same page. They were both more or less about the same subject. But they might as well have been a universe apart. One was great but the other really sucked.

But you be the judge. Which one is good but sad....and which one is stupid and bad?

But it gets better. Guess which post got MORE votes than any other on PB? Yeah THAT one.

Don't you HATE the idiot left?

The good but naive ones who would go to the mat to defend the bigots from Free Dominion.

The ones in the United States who don't know that equality means equality.

The historic Visible Vote 2008 Presidential Forum.... left unanswered one nagging question: Who among the three major Democratic candidates—Hillary Clinton, John Edwards, and Barack Obama—is going to step up to the plate and show some real leadership on LGBT issues?

The ones who mock our struggle.... and the refugee process... and don't understand or care that for Alvaro.... and so many other gay people....it's a matter of life and death.

I know the immigration apparatchiks are as anti-gay as they come. And racist pigs too. But what the fuck is the left these days? A wanker debating society.... a Facebook Fogey's club..... a collection of closet bigots.... or all of the above?

In Canada they can't get it together to defeat Stephen Harper. In the United States they can't stop the War in Iraq. And when it comes to gay issues they're absolutely fucking USELESS.

I think it's time we let the leftards of the Bongo and Quesadilla Brigade know exactly how we feel about them. Really give it to them. Let them know that with "friends" and "progressives" like that who need fucking enemies?

Let them know too that if gay people have to fight alone we will. It will take longer. But we WILL win. One way or the other.

Or in the words of another of those phony lefties....before he sold out... with or WITHOUT you...

In the meantime if there are any decent lefties out there....gay or straight...please help Alvaro. 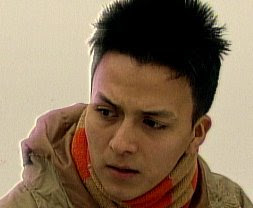 Because no matter what the leftards say.

Life and death, isn’t it nice that we live in a society that we claim is for the better of all humankind but we can’t allow a single man the shit we send armies across the globe to defend?

Wow talk about shooting the messenger. Any attention paid to the Alvaro Orozco case should be welcomed, since it is such and outrage. And save your vitriol for the Blogging Tories.

I got my letter off to the Minister. I wonder if mine host has written yet.

Incidentally, the law in Nicaragua, recognized by Amnesty International as a violation of international law and of human rights norms, has been on the books since 1992, but it's never been enforced. (It doesn't call for the death penalty, by the way, but for a term of imprisonment even for advocating LGBT equality.)

My real concern about this mess, besides, of course, the fear that Orozco might be that law's first casualty because of the publicity he has received, is what's in the minds of Refugee Board adjudicators. That whole process is badly in need of a drastic overhaul.

The problem is that without any point of reference, a link of some sort, dr. dawg’s post only works for those who already “get it”. I got it right away but I was a little disappointed to see that there were no links, no call to action, nowhere to go to really bring the point home.

If all of our readers were really as smart as that post assumes, we would all be out of business or only telling each other what colour shirt we’re wearing today. With that in mind, I just remembered I have to post my Saturday morning cartoon.

It doesn't take rocket science to figure my post out, Bruce, given the other content of the ProgBlogroll, not to mention prominent news coverage. If some are too busy being angry to get the joke, that's their problem--explaining jokes sucks, and it insults my readers as well.

Don't be too hard on Dr Dawg, he's not a homophobe as far as I know, and that post was very uncharacteristic. I do however understand why you are angry.It is full of every gay stereotype under the sun. I think all he was missing was a hairdresser. I am older gay man, I've heard them all, and they do hurt. I also agree with Bruce that if Dawg had put in a link to Alvaro it might have helped a bit. As it is I'm just disappointed.I do hope we can do something to save Alvaro.I'm praying for him.

I also don't think Dawg's post should be construed as offensive --apart from not including a link for Alvaro's blog &/or writing to the right con-fucking-fused minister. Regardless of how smart your readers might be Dawg, including the links wouldn't be anyhting BUT positive. As a casual reader myself, I would think "Oh, the author included a link to where I can help in some way, great, that saves me a little time in hunting for it."

Yeah, well, Jay, satire is satire and advocacy is a different genre. We had a post just before mine urging action. I came at it a different way. Now one of my characters ("Ida Knowe") is being confused with me, for crying out loud--so I'm the stereotyper, not my caricature of a Refugee Board adjudicator. There are a few straight stereotypes to see in the piece as well, like the gay-bashers in parks and the Straight Arrows guy.

That this is over some folks' heads doesn't surprise me. But writing a post that effectively calls me a homophobe is well over the top. It just goes to show that gay people can be just as blitheringly dumb as straights.

Last comment, but I think I need to make it--my previous comment wasn't a poke at gayred, although I wish he'd made the necessary distinctions. It was directed at the blogowner here, who leaped before he looked.

Now you know what we conservatives have to put up with all the time. This foulmouthed little homofascist is beyond the pale.This is where your darling Trudeauopia has gotten us to, now do you understand? I agree with you though I think we need a straight pride day.

Hi everyone...and especially Dr Dawg. I'm sorry I took so long to get back to you but I was out of town...and blogging and canoeing doesn't work.
I have written a response but since it turned out rather long I turned it into a new post.

Thanks Bruce and the others for sticking up for me. As for you SoCon shithead get back in your hole. i.e. Veneral Dominion.
Comment moderation really is a good thing...

So what in the hell is the Immigration Board there looking for? Have Alvaro and his boyfriend strip naked and have sex in front of them?

I read your article and know all of it is true about him lying , he is lying about his age and being abused by his dad .Also that he flew away from Nicaragua because was treat .When he came to Texas for the first time he lye to ous his family .He said his family needed economic hel and thats why he came to the united states to help them out. All turn out to be a lye he let his mother die of cancer last year, he dint help them out only thinking about him. I sent the Canadian Pryme Minister a Letter about his truth because I know he doesnt deserve being helped.He is Bysexual and not gay 100 percent .And my point of this email is for you not to be fooled and no to fool another people about him . Thank you