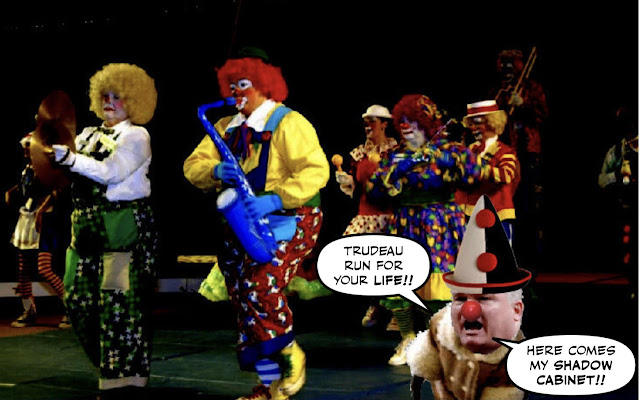 I mean what else can you call it, when it's so full of mediocrities O'Toole's "star" shadow cabinet minister is Pierre Poilievre?

Conservative Leader Erin O'Toole is restoring popular MP Pierre Poilievre to his role as the party's finance critic today as he releases his new list of critics for the next Parliament.

The vicious little Harper sucker who terrorized Canadians during the dark days of the Con regime, with his attempts to suppress the vote and his foul Enemies List... "I see the Liberals quiver when he rises to his feet," @erinotoole says of @PierrePoilievre and why he's back as the finance critic. #cdnpoli

When in fact they'll probably be laughing their heads off when Poilievre comes up against their finance minister Chrystia Freeland... 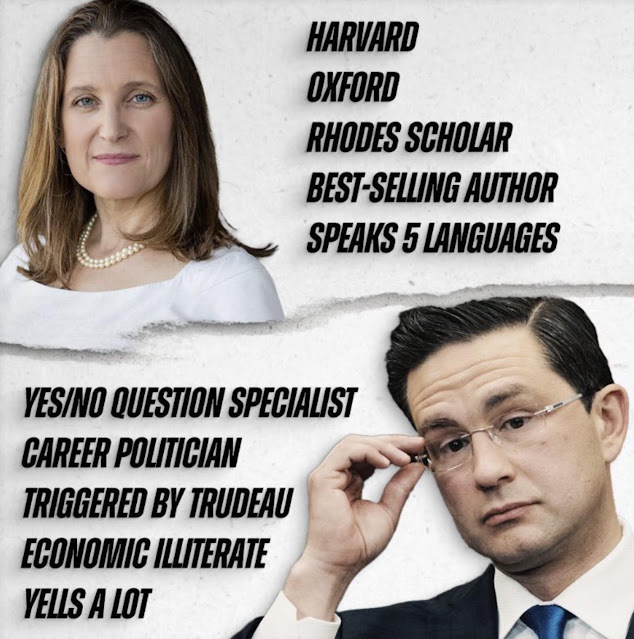 Because it will be no contest.
But as if Poilievre isn't bad enough, there's also Michelle Rempel, now posing as the new Minister of Natural Resources i.e. Minister for the Tar Sands.

Which will almost certainly be bad for her, the Cons, the country, and the planet.
And the good news?
Marilyn Gladu won't be the shadow minister of anything.
And neither will the SoCon fanatic Leslyn Lewis.
Who needless to say must be VERY disappointed... 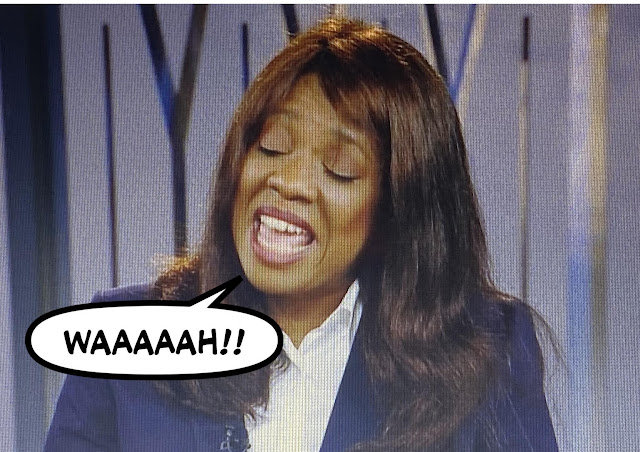 So it won't be long before her many supporters turn their guns on Erin O'Toole. 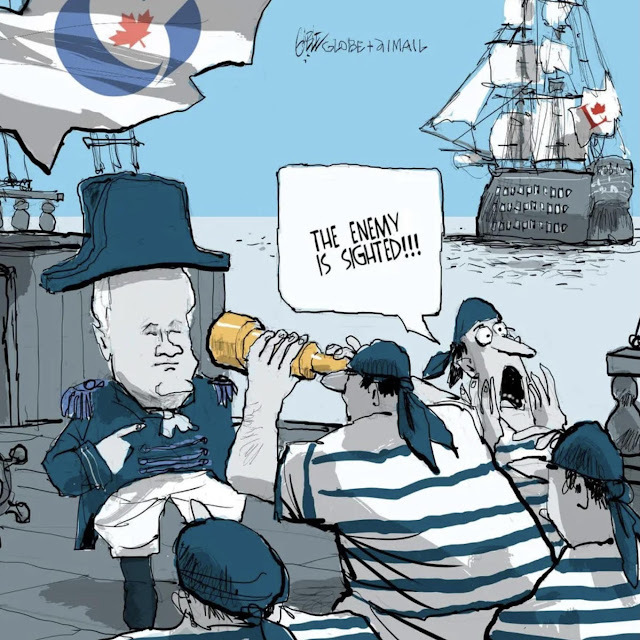 And it will serve him right.
He was never a Canadian leader, he won't be around for much longer.
And with a little bit of luck he'll take what's left of the Cons down with him...
Posted by Simon at 6:53 PM

"I see the Liberals quiver when he rises to his feet"

According to the Tool he certainly terrorized the Liberals or at least caused them make a hurried dash for the vomitorium.

I quivered with a deep belly laugh at the tool's statement that the Liberals quiver in fear when Skippy the Harper fart vacuum rises to speak. Perhaps at having to listen to his whiny little bitch voice but that's about it. He is so enormously outclassed by Chrystia on every level that it will ensure we're all quivering with laughter when CF hands his tiny little balls to him on a platter in QP, over and over again. Should be quite entertaining.
It'll be interesting to see how Saint Leslyn responds to being shut out from the tool's shadowy cabinet. This should concern the tool as it could be her "back of the bus" moment she so craves to strengthen her act of playing the victim. The SoCons will not be happy and it will further divide the party of division.
What's really telling here is that the Cons "star" finance critic is also one of the biggest assholes in the party and in the end, a true reflection of what the CPC has devolved into.
JD

Who the fuck is Skippy "popular" with? The extremely online shitposter club that stans for Ben Shapiro? And they say the "Trudeau cult" has a shallow front bench. Far from it. Meanwhile, the big blue circus tent has as its "shadow critic" clown show, 49 incompetents and barely-hidden bigots chosen out of desperation to buy off their loyalty and not vote for a leadership review. What a transparent joke.

Climate change must really be accelerating as of late, because hell must have frozen over when Bob Fife of all people said something of merit. The pigeon carries no respect on Bay Street, because he's completely ignorant on economics and sows damage to public institutions with such Infowars antics as attacking the Bank of Canada as socialist rabble-rousers and howling at Mark Carney as some kind of Illuminati/Freemason/NWO "Davos elite."

As such, according to Fife he stands to alienate the "blue Grits" who the tool is desperate to have vote for him, and who loathe Trudeau with a searing passion but can't bring themselves to support a potential finance minister who is so full of pigeon shit. No one serious buys what the bird brain is selling. Let's not forget how he squawked about the "Great Reset." He feeds poison bird seed to a flock of would-be sausage handlers who, if it wasn't for their tin foil dunce caps, wouldn't otherwise be too tightly wrapped.

Who else is on the roster of Peter Principle unprincipled appointees? Besides Petroleum Barbie from the riding of Oklahoma-Nose Pick, I see the antisemitic Soros conspiracist Kerry-Lynne Findlay as defence critic of all things. For "ethics" we have John Bastard I mean Brassard, who chimed in on that Soros nonsense around the same time. Dane Lloyd of "feminazi" infamy is in there, and so is weak Andy doing something or other. Check and see, how many of these yahoos correspond with the infamous 62 who voted against criminalizing the torture of LGBT children? So anti-vaxers are a bridge too far, but bigots are par for the course?

A real all-star cast of A-listers in this lineup -- did I say A-list, I meant Z-list. The bottom of the barrel of a nuclear dumpster fire. Disband the Conservative Party of Canada. It is beyond saving.

Have you now or did you ever breathe oxygen, case closed.

Marilyn and Leslyn refuse to reveal whether they're vaccinated, so they took themselves off the list of shadow cabinet candidates. But they sure pwned the Libs as they attend parliament remotely while slurping their tubes of horse paste.

Hi anon@7:27PM...Pierre Poilieve did terrorize a lot of people during the years when he was Harper's little stooge. He helped his dark Lord drawn up lists of people who were considered enemies of the regime. He did all he could to prevent young people from voting. But it was the way he bullied senior civil servants that set him apart from the others, and ultimately cost him his chance to become Con leader. For apparently some of those civil servants quietly let him know that if he did run for Con leader they would go public with the details of his foul bullying, and that's why he withdrew his candidacy at the last moment. I have a tape of those allegations and will use it if he ever becomes a leadership threat again...

Hi RT....The fact that O'Toole would appoint Poilievre to his shadow cabinet because in his mind he makes the Liberals "quiver" is a clear sign that O'Toole is losing his mind. The stress of all that losing has at the very least clouded his judgement, and tells us more about the Cons than it does about the Liberals. It's a monumental gaffe that might please the right wing extremists in O'Toole's demoralized party, but every time the obnoxious Poilievre opens his mouth he will drive away the voters the Cons need if they are ever to become contenders again. Well played O'Fool we can't thank you enough...

Hi JD...Yes, I too look forward to seeing Freeland taking on Poilievre, for we are going to need a shovel to scrape the pigeon off the floor. It's an appalling choice, that as you point out, accurately reflects what the Cons have become. Poilievre not only lacks any knowledge of financial matters, he has become a parody of himself, lecturing people on his bizarre views that seem to date back to the 1930s. A Globe columnist recently described the way the Cons are blaming the Liberals for such things as inflation as "delusional" and the choice of Poilievre falls into the same category. It may be that O'Toole had no choice, because the right wing extremists were demanding their Little Fuhrer or else. But if so it's it's a fatal mistake that might save O'Toole for now, but will end up killing the party....

Hi Jackie....Yes, I also wondered where CTV got the idea that Poilievre is "popular." I know he's popular with some of the most extreme right-wing Con supporters, and with the morons in his riding who keep election that pension porker. But no decent person could support Poilievre, and he will definitely not help make the Cons more popular. But as you point out, the Con's shadow cabinet is riddled with kooks and religious fanatics and all kinds of mediocrities, and cannot hold a candle to the Liberal cabinet which is infinitely superior. And it does however accurately reflect the state of the Cons, who just lost yet another election, and seem determined to lose the next one...

Hi Steve...Are you suggesting that the Cons are some kind of lower life form who don't need oxygen, but feed on human excrement. Because if you are, I beg to disagree, they are just too dumb...

Hi anon@8:44AM...Marilyn Gladu has written a fawning apology, which only makes her look like even more of an idiot. So she will be in the Commons when Parliament reopens again. And so will Leslyn Lewis, who despite her saintly protestations is as grubby as the rest of them...