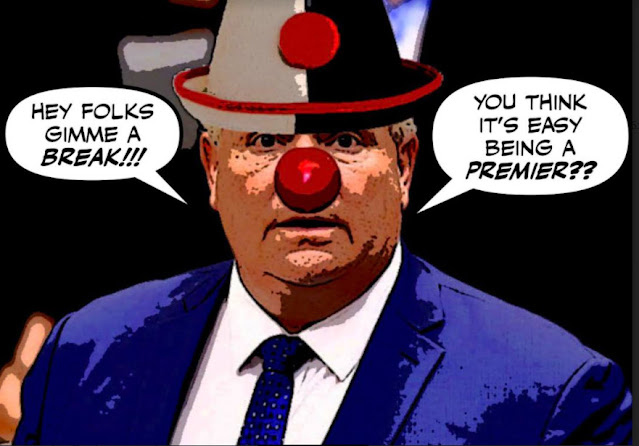 Doug Ford was already looking like a clueless Con clown, after refusing to lockdown Ontario even as Covid cases surged.
Halting vaccinations over the Christmas break, as if Covid took a holiday.

And instead of making people feel safer, deciding instead to make a "cheery cheesecake."

But now it's worse. 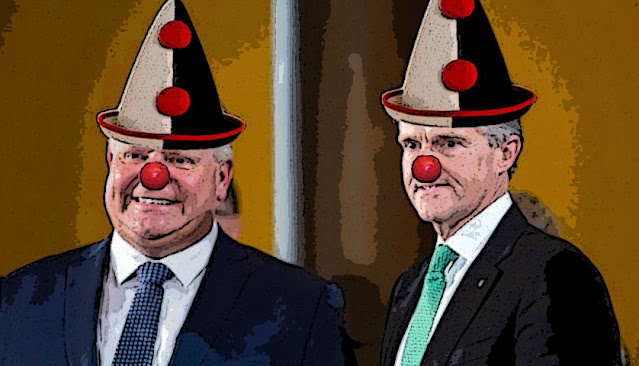 For now there are two Con clowns, and it's a full-blown Con clown circus.

Ontario Finance Minister Rod Phillips says he'll return home after news that he travelled to a Caribbean island for a personal vacation amid the COVID-19 pandemic sparked public anger.

On Tuesday, Ontario Premier Doug Ford said he was "extremely disappointed" that Phillips had travelled despite repeated calls for Ontarians to stay home amid rising case counts of the novel coronavirus.

He tries to make us believe that he never left the country. 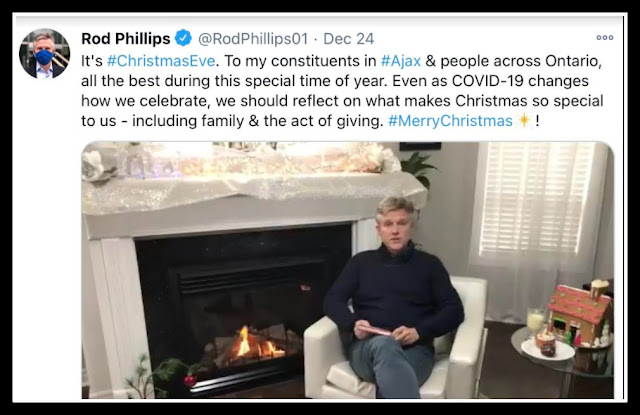 And that three days after he left for St. Barts he was still at Queen's Park, and please ignore the sound of waves in the background...

.@RodPhillips01 are those waves we hear behind your Queen’s Park Zoom background? This is disgraceful, and Ford knew about it for two weeks. #onpoli

While Doug Ford claims he knew nothing.

"Premier Ford was not aware of the minister's trip, nor did he or his office approve it. The premier learned of the trip after the minister was already out of the country."

But wants us to know that they don't call him "Premier Dad" or Big Daddy for nothing.

"I have let the minister know that his decision to travel is completely unacceptable and that it will not be tolerated again — by him or any member of our cabinet and caucus," Ford said in the statement on Tuesday evening.

"I have also told the minister I need him back in the country immediately."

So now it's worse than just a Con clown circus. 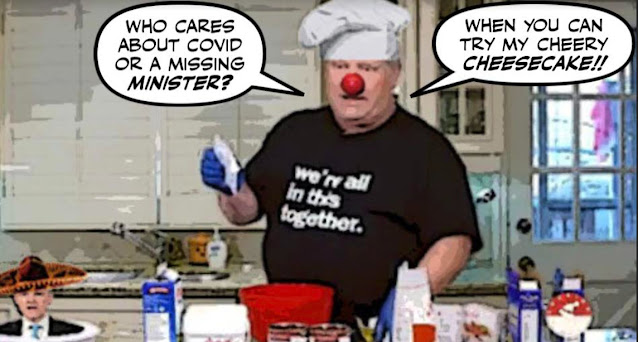 If people weren't getting sick in record numbers. 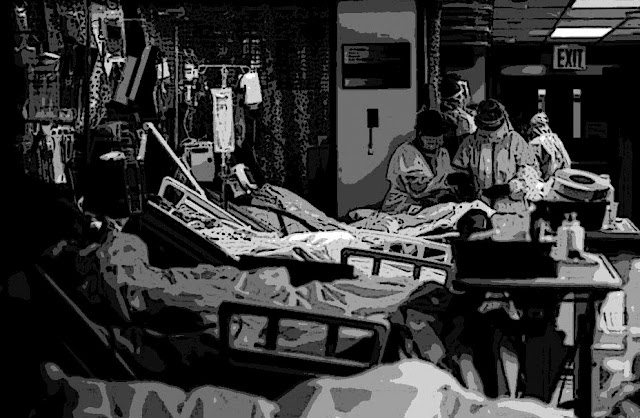 Ontario reported a single-day record of 2,923 new COVID-19 cases on Wednesday, as hospitalizations and intensive care admissions of people with the illness reached all-time highs.

Currently there are 1,177 patients in hospital with confirmed cases of COVID-19, the highest number of admissions since the start of the pandemic in late January.

As they are, or soon will be, all over Canada. 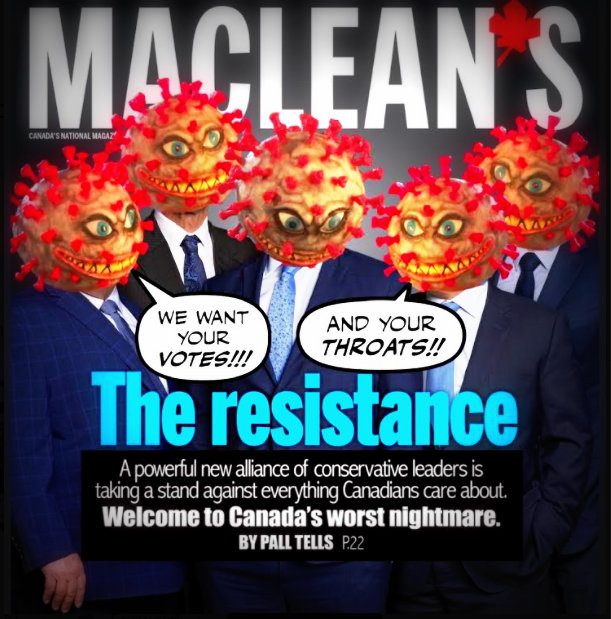 Which only reinforces the message I have been trying to hammer home for years:

If you vote for the Cons to run anything, misery and death will follow you forever.

And you will deserve it...

Reasonably happy and secure people don't vote Con. Failure ,misery and blame is at the root of Con power and they are just naturally good at creating an environment that allows them to flourish. Hopefully people will catch on before passing the point of no return!

I'm not sure what's worse, Ramblin' Rod's home video on how to ruin your career in one easy step by pretending you're at home when you're not. Or Dougy suddenly remembering that he knew his finance minister was on the opulent Island of St Barts, lying on his back in the hot sun, flailing. Once again Premier Doug Dithers has failed as a leader. He and his fellow Con premiers inactions are the perfect examples of what not to do during times of crisis. And while I marvel at how our useless Con media attempts to throw shade for them, the true results of their incompetence wont be lost on the people who actually pay attention to their antics. They're cons after all, in every sense of the word.
JD

Dougald J. Trump sez "I never take responsibility" -- his first knee-jerk response is to blame Trudeau for not putting the airports under barbed wire prison lockdown. As though it's his fault that Ford knew full well about Phillips' holiday fun in the sun and got caught okaying another reward to one of his cronies. What does he want, for Trudeau to tackle Phillips at the airport? Hijack the plane? Who edited his pre-recorded videos lying to constituents about his whereabouts, Jeff and the Proud boys? Now Premier Poppa says he's going to give his buddy a "stern talking to" when he gets his "backside" on Canadian soil. Spare the brat and spoil the Rod? Oh, I'm sure he's terrified. Just wait until your father gets home!

I guess we should expect the hacks at Rod's PR firm of Postmafia to churn out some more screeds about WeGhazi or the carbon tax or a flashback to National Lampoon's Aga Khan Vacation real soon. Where's Brian to wax romantic about Rod strolling along the shoreline with an open shirt collar and a conch shell necklace? Sorry Doug, can't pin this on Justin. Cons acting entitled to their entitlements is a feature, not a bug.

The blatant hypocrisy, the borderline criminal levels of negligence, the out-and-out inhuman greed -- that's not cherry or cheery cheesecake on the hands of this government, it's blood. Ford's band of fools have done some bigly oops before, but you could say that this one really takes the cake. "Would you like to spend Christmas on Christmas Island?" The only island every last one of these arrogant incompetents belong at is a prison colony!!

The premier learned of the trip after the minister was already out of the country."

Well, either he is lying or both he and the minister are amazingly incompetent. A key member of cabinet does not swan off to to Caribbean in the middle of a pandemic without mentioning to the boss that he won't be in the office or the country for a month.

I'll go for a)lying & b) both the Premier and the Minister are incompetent.

Wasn't one of his comms team caught in SK after some nerd geocached his tweet? Wonder what he will get; 100 lines!?

Philips and Ford deserve every bit of scorn, derision and criticism heaped on them for this, and they are getting it,and from Con circles for the most part.

Compare that to the mindless drones that make up the Justin Trudeau cult of personality who scream fake scandal every time the PM is embroiled in controversy....the people on this blog included.

So Miss Okie blames the CBC for making Rod Phillips a pariah, says now she can't go see her sick mother-in-law. Um, you idiot? Trudeau in all his year-enders said how much he misses Margaret dearly, but public health comes first (and her health). He's not going to visit her at her home in Montreal even though it's just 20 minutes from Rideau. Why? Because he's following the same rules as everyone else. (Well, almost everyone else.)

You know what, I'd be willing to grant the prairie priss a special dispensation if she retired from politics, went down to hick country and stayed there permanently. Don't go away mad, Michelle, just go away.

Anonycon 11:58AM of the Herrball Harper cult of personality, perhaps you missed that Phillips got little more than a tut-tut from the aptly named John Tory. You know darn well that the media never goes into overdrive for legitimate Con scandals like they spend months amplifying and obsessing over minor "optics" issues or misunderstandings from the Trudeau Liberals. Liberal "scandals" are usually honest mistakes, entanglements in bureaucratic red tape or obscure British legalese, or communications flubs that serve as projection and distraction from willful and actually harmful malfeasance by Cons.

How many people died or will die because of Maggie Trudeau's speeches versus Mike Harris' blood-money profiteering off old people's lives, or Charles McVety getting the Doug Ford Good Housekeeping Seal of Approval to propagandize hate? Did anyone risk being infected with a pandemic disease because of Justin's family holiday at the home of a family friend who also happened to be his father's pallbearer -- and a humanitarian philanthropist who Harper made an honorary Canadian?

And this is even leaving aside the fact that among those fake Liberal "scandals" were plenty of mitigating circumstances that the one-sided media refused to cover, in favor of their groupthink narrative that Trudeau bad 24/7. I won't go into all the details because it's been covered ad nauseam already, but I'll just say go ask Mark Bourrie or Glen Assoun for the defense's case.

Sorry bucko. Go have a Don Cherry cheesecake and eat your feelings, because none of your Hillary's emails on Hunter Biden's laptop kind of conspiracy theory smear campaigns are worth the emergency COVID toilet paper they're printed on. Happy New Year.

By the way, I am aware that Philips got little more than a tut tut from Tory. I guess you missed where I said from Con circles for the most part....again unlike you mindless drones who have spent 2 years repeating the party talking points about fake scandals and nothing burgers.

Hi RT...you're right. Failure, misery, and blame are what make people Cons. And being of sub normal intelligence and lacking a moral compass they try to get everybody to wallow in their filth. But we are slowly but surely crushing them, and they will soon be just a historical aberration....

Hi JD....Well as you know I have always believed that Doug Ford is unfit to be the premier of Ontario. He's a bestial bully, he's as dumb as they come, and now all of that is killing people in Ontario. There is some good news though. Ford dreams about becoming the Prime Minister of Canada, and now that's NEVER going to happen....

Hi Jackie...As usual you sum up the situation brilliantly. In normal times what the Cons are doing would be disgusting enough, but in a pandemic it's grotesque and unforgivable. The situation in the hospitals is bordering on the catastrophic, with some preparing for the ultimate horror of rationing medical services. And as I'm writing this, I look down on the street below and see a group of Covidiots carrying on as only they can. It's lucky I'm still in my pyjamas or I might have raced downstairs and let them know what I think of them. Or worse, carried a carton of eggs with me and really let them have it. Those people are scum and should be in prison...

Hi jrkrideau...The frightening thing is that Phillips is, or was, one of the few smart people in the Ford government. The intellectual level of Ford and most of his mob is so low I'm not surprised that they are screwing up the pandemic, and can't even organize a proper vaccination campaign. But they will blame Trudeau of course, the only leader I can see who is doing a decent job. It's absolute madness...

Hi Ben....I don't know whether one of Ford's incompetent stooges was caught trying to cheat in Saskatchewan, but I wouldn't be surprised. Those ugly arrogant Cons really think they are above the rules others try to follow. There are too many doing that and their selfishness is threatening the lives of thousands...

Hi anon@11:58... Don't be absurd you grotesque Con. You can't compare Trudeau supporters to the evil members of the Con cult. Trudeau has done a fine job of managing the pandemic, while your evil Cons are threatening the lives of thousands of Canadians. And while I'm at it, I don't need to hear what a Con has to say about anything. I've deleted about four or five comments of yours in the last couple of days, so please go away and don't bother coming back...

Hi Jackie...I saw that clip from Rempel, and I had a good laugh. I can't wait to include it in a post this weekend. The pandemic is showing the Cons to be who they really are, and it's not pretty. Although it will come in handy during the next election campaign...