Why Doug Ford Could Never Be Ontario`s Big Daddy 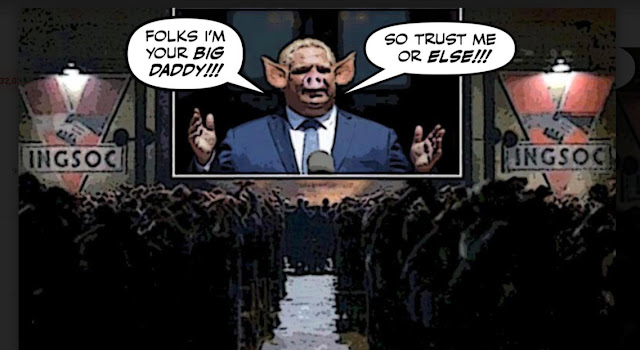 I'm proud to say that not for one fleeting second, did I ever believe that Doug "Meatloaf" Ford was fit to be the Premier of Ontario.

And I've always considered the idea of that brutish dumb Con trying to lead the province through a murderous pandemic, the stuff of nightmares.

But not any longer. Now the nightmare is only too real.

For not only is the deadly virus surging out of control in Ontario, thanks to Ford's criminal incompetence and his absurd pre-Boxing Day mockdown.

His much touted vaccine program is going absolutely nowhere. 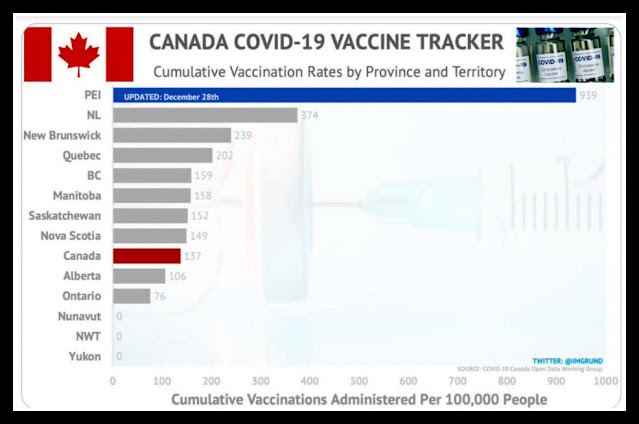 Can you believe it? The Ford Nation province is at the very BOTTOM of the list.

Because his Con clown government is apparently sitting on about 90% of the vaccines the Liberal government gave them, for no good reason.

And nobody is getting vaccinated during the holiday break, because of mass hospital staff burnout...

Brought about by the Ford government`s unwillingness to staff Ontario`s hospitals properly, and its inability to flatten the Covid curve.

So what is Dougie doing about this desperate situation, with people dying all over the place?

Answer: showing us all how to whip up a "cheery cheesecake."

The holidays are a great opportunity to stay home and bake some treats. Consider trying my family’s cheery cheesecake recipe! It’s simple to make and very delicious. pic.twitter.com/VwiRjaQfTH

And to make matters worse, instead of questioning Ford's total lack of empathy and judgement, some in our useless Con media are now calling him "Premier Dad.

"He became 'Premier Dad' to everybody and he found that empathy," said Amanda Galbraith, a principal at public relations firm Navigator and former communications director for Toronto Mayor John Tory,

Now isn't that a nightmare?

Especially since as Dale Smith points out, Ford has absolutely no empathy.

Ford’s empathy has been for business owners and not for the hundreds of people who have died unnecessarily on his watch thanks to his inaction...

I will grant that if there is a term that could be applied to Ford, it would be avuncular, and I think “Uncle Doug” is the better moniker, because he’s not doing things for Ontarians’ own good – witness the exponential growth of COVID, and the mounting deaths that were wholly preventable if he had actually bothered to do his job.  He is both the crazy right-wing uncle, who thinks the world of Donald Trump, but in his handling of the pandemic, he would fool people into thinking he was taking action by calling anti-maskers “yahoos,” and pleading with people to follow the rules that he rarely could be bothered to follow himself, or which he was quick to undermine at every turn in order to pander to the business community.

And the media should stop giving him a pass.

He has abused his powers in the legislature to reward his friends – but so long as nobody will actually do the work of holding him to account for his failures, rather than keeping their focus on Justin Trudeau, Ford seems determined to skate past the ongoing mishandling of this crisis.  We shouldn’t let him get away with it.

Ford should also be judged by the company he keeps... 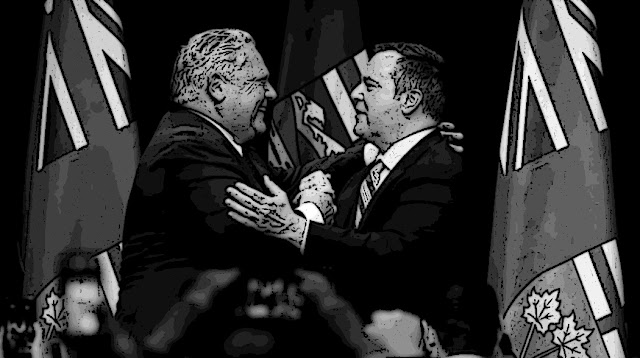 For all our grubby Cons share the same right-wing ideology, and the same goal: to destroy the country we know and love.

Like Jason Kenney, Ford is a bestial Con who panders to bigots. He can't feel the pain of others. Or if he can he doesn`t care. He will cheerfully torch our beautiful planet. He will ALWAYS put the interests of business before the interests of Canadians.

And he will NEVER be Premier Dad... 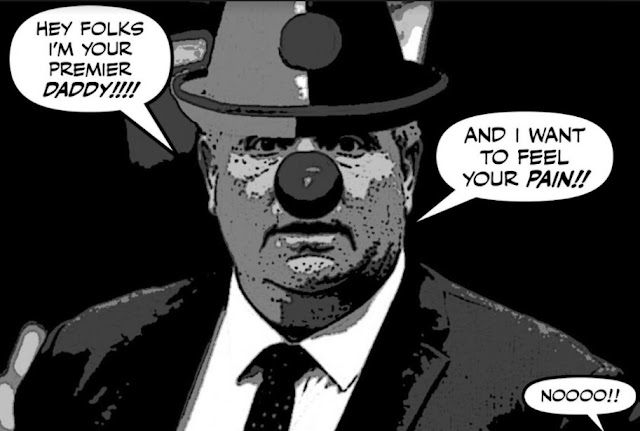 But this too is true in these dangerous times:

Unless we can drive the Cons from power, and totally smash their cruel un-Canadian ideology.

The pandemic will go on and on, many more Canadians will die.

And our country will take forever to recover...

CanPress should be ashamed of themselves for regurgitating that BS wire copy propaganda from Navigator. All the media does is run interference for Cons, in some cases through omission. Note that nowhere in the ToryStar's bombshell front-page story on LTC homes accruing massive profits under Doug the Thug's mafia regime, was the name Mike Harris ever mentioned as a board member at Chartwell. But they spent months reminding eeeeeveryone about Maggie, Sacha and WE.

Trudeau gets howled at every 5 minutes with calls to resign for buying doughnuts and getting a haircut. I count 0 op-eds demanding that any of these feckless premiers quit in disgrace over matters of life and death and intentional in-your-face GREED. Oh, and whatever happened to the McVety scandal? Why did that vanish in a week while copious amounts of ink, bandwidth and airtime were wasted on WE?

Now the "very smart general" who Dougald J. Trump put in charge of the rollout as a prop, is the one taking "sole responsibility" for the lag. Literally, and I mean literally an echo of Deadbeat Donnie in the U.S. not two weeks ago. Cases will skyrocket due to holiday gatherings because he refused to do a proper lockdown out of a desire to be "liked". But Poppa Ford did find enough time to make a new cooking video, and Ivanka Mulroney made sure to warn everyone about seat belts! Nice to see they have their priorities straight???

There is wide suspicion that Dingbat Doug and Kudatah Kenney are intentionally botching the vaccine rollout to sabotage Trudeau, playing on the public's desperation and the media's unwillingness to address jurisdictional responsibilities. All of it straight out of the IDU playbook, right down to copycatting Trump and this bizarre paternal psychology. The patriarchal archetype itself is fascism 101.

If ever there is an inquiry after COVID, every last one of these sociopaths belongs in prison for criminal negligence. No amount of cheesecake recipes or feigned concern for da little guy will ever absolve these Cons of the blood on their hands. Say it loud and clear and shout it from the rooftops: FORD LIED AND PEOPLE DIED!

Hi Jackie....I don’t know why the Canadian Press seems to have developed a rightward tilt. But I do note that while CP was once on death’s doorstep, it now seems very financially healthy. So I wonder if the two are connected. I have always believed that Big Money is supporting at least some members of the Con media. I have no evidence of that, yet, but CP’s anti-Trudeau bias seems particularly disturbing. I don’t think the Cons are deliberately trying to wreck the vaccine program, I think it’s just incompetence. But I do agree that Ford and the other Cons will need to be investigated when the emergency is over...

Unbelievable! 90% of the doses are sitting idle in his goddamned fridge and he takes a holiday from administering it? General Rick "Patsy" Hillier takes the blame but the blame lies solely at the top. He should have known and probably okayed the holiday plan instead of ensuring that needles in arms continued, 24/7, whether it's Christmas day or Groundhog day, but no. Premier Meathead was too busy making his cheesy cheesecake video. What's the new year's plan? Another 4 day weekend and a hash browns video? I also heard that they want to give out just one dose and I guess hope that when the time comes for number 2, they are still available. Hmmm, what could possibly go wrong there?
The Ford administration is proving to be as inept as the king of incompetence himself, Trump. It's frightening to think of how he'll handle the rollout when JT starts sending him doses numbering in the hundreds of thousands. Better a get a bigger fridge, Dougy. A huge, bigly fridge.
JD

Although somewhat better than his cousins to the west and south; Dougie is a tribal leader caught between the basic emotions of fear and greed. Its put on the brakes when fear the health care system will collapse and political greed when the threat subsides. Rather than organize the numerous technical, social, economic resources in order to defeat the Covid enemy he exploits those that were already established such as medical care and ignores the rest such as rapid testing,contact tracing software, rigorous data driven policies etc. Compared to China our response has been a dismal failure and although some will say its because the Communists trampled human rights this is just a cop out to hide the fact the Con collective failed to organize the many resources at hand in order to defeat the Covid enemy. Perhaps there were more important enemies?

Leave it to Dougie's government of fools to end 2020 with a bang. Rod Phillips is just the grift that keeps on grifting. Cons do love their hatewank about the hit job that was National Lampoon's Aga Khan Vacation and the Easter egg hunt at the sekrit QAnon mansion at Harrington Lake. Bit of a delay but man, is that a boomerang effect if there ever was one. More projection than a drive-in theater.

And the hits just keep coming for these hypocritical and dare I say, elitist Cons: one of Moe's stooges is in California, a couple of Kenney's tissue managers said aloha to Alberta and landed in Hawaii, and to top it all off, sacre bleu, a CAQ guy went to Peru (!) By the way, where is Dougie anyway? Anybody seen Miss Okie?

BTW, Rod is a former Postmedia CEO, and the story about his vay-cay was... buried so deep it's a wonder they printed it at all. But if Trudeau so much as went to the grocery market, it'd make front page news and 24/7 wall-to-wall coverage of a massive career-ending ethics scandal. It's time to fumigate that cabal through a public shaming campaign and put these jokers on the unemployable "Conrad Black List."