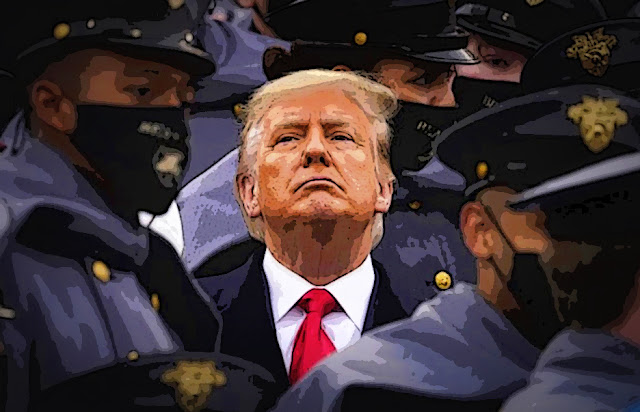 As we all know Donald Trump is having a very hard time accepting the results of the U.S. election.

So even though an American is dying of Covid every 33 seconds, all he does is rant and rave and tweet stuff like this:

GREATEST ELECTION FRAUD IN THE HISTORY OF OUR COUNTRY!!!

While desperately looking for ways to overturn the election results. 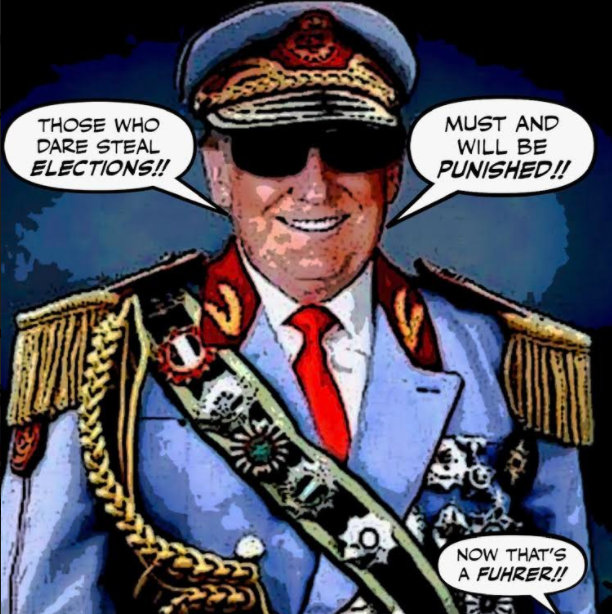 Even if that means exploring the idea of declaring martial law

At the White House on Friday, President Trump held what may have been his most deranged meeting yet. In it, the president raged at his loyalists for betraying him, and discussed taking extralegal measures to overturn the election. 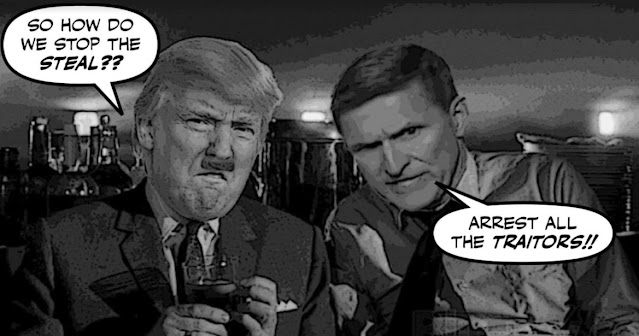 Trump also reportedly brought up Flynn’s proposal, which he has expounded on cable news, to impose martial law and direct the military to hold a new election. “At one point in the meeting on Friday, Mr. Trump asked about that idea,” reports the Times.

Which has many wondering whether Trump has finally lost his marbles.

“He’s never been in a situation in which he has lost in a way he can’t escape from,” Mary Trump, his niece and the author of the fiercely critical and bestselling book about him and their family, told me. “We continue to wait for him to accept reality, for him to concede, and that is something he is notcapable of doing,” added Bandy Lee, the forensic psychiatrist from Yale who’s spent the last four years trying to warn the world about Trump and the ways in which he’s disordered and dangerous. “Being a loser,” she said, for Trump is tantamount to “psychic death.”

“His fragile ego has never been tested to this extent,” Michael Cohen, his former personal attorney and enforcer before he turned on him, told me. “While he’s creating a false pretense of strength and fortitude, internally he is angry, depressed and manic. As each day ends, Trump knows he’s one day closer to legal and financial troubles. Accordingly, we will all see his behavior deteriorate until it progresses into a full mental breakdown.”

I don't think that Trump will be able to stage a coup, but I do think he's crazy, desperate, and dangerous.

And in no place is he more dangerous than in the Middle East.

In the organisation’s heartland, Hezbollah members are watching the clock – and the skies. Israeli jets have been streaking overhead for more than a month, and over the past few weeks the frequency of flights has sharply increased, as has security in Beirut’s southern suburbs, the nerve centre of the region’s most powerful militant group.

Leaders and senior members fear that Trump, his outgoing secretary of state, Mike Pompeo, and Israel intend to use the weeks before Joe Biden’s inauguration to act decisively against Iran and Hezbollah before the new president takes a widely anticipated softer stance.

One senior figure described the coming weeks as “the most dangerous period for the last 30 years. Everyone is worried, and with good reason.”

I think we should all be worried.

For does anyone believe that Trump would NOT love to set the world on fire before Biden becomes president? 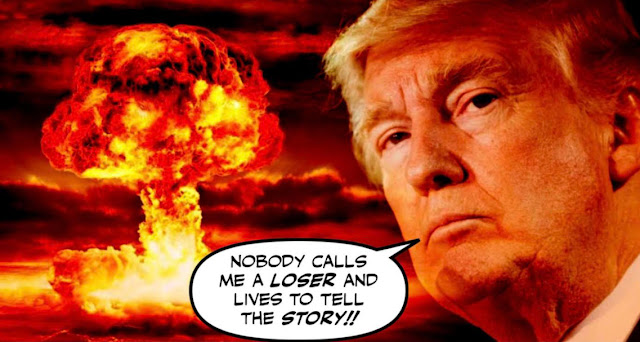 He was always a maniac. He never should have been president.

But he got away with murder.

And now nobody will be safe until he is dragged kicking and screaming from the White House... 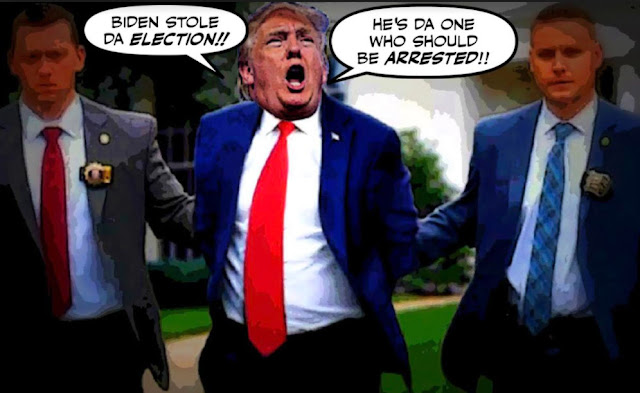 Donald's marble count was pretty low to begin with so his descent into madness could be closer than we think, Simon. Please don't confuse this as being a compliment. I will give him credit for pulling off the biggest con job in American history. His natural ability to bullshit his way through life has now garnered him in excess of 200 million dollars for an election he lost so it's no wonder his minion Retrumplicans are echoing his imaginary grievances. They want a piece of the pie as well. Of course, if the millions of his supporters living somewhere between Pluto and Hisanus weren't so colossally stupid, this absolute freak show would never have happened in the first place.
Trump's time remaining will be spent trying to make life as difficult as possible for the Biden team when they take over. It's been a childish, petty, vindictive display of biblical proportions so far so don't expect that to change. As for starting a war, civil or other, I don't think he has the balls to do it and at this point, neither do those closest to him. Not only could it add to his legal troubles, his fortune he's amassing thanks to his Huckleberry Fuckwads could be in jeopardy. However, these are still delicate times. As he appears to be somewhere between demential and maniacal, I wont really feel at peace until noon on January 20th when the nuclear football is finally out of the little dictator's little hands.
JD

I don't believe Biden received more votes this election than Obama during his first presidency.

I don't believe Trump received more votes this election than during his first presidency.

See how easy it is to make statements with zero facts to back them up?

Stop the steal by President Orange Peel! Can't Justin annex us temporarily for about a month or so, until Joe gets sworn in and Parliament comes back? I know he's probably exhausted and still swamped with work on Canada's COVID response even over the holidays, so I dunno, can he designate Hadrien to be the interim emergency commander in chief, just for a little while?

Perhaps Didi could sign an immediate executive order sending Diaper Donnie and his pack of playground bullies to an indefinite time-out, in a high-security playpen at Rikers Island of Misfit Toys. The bratty baby needs to be sent to bed with a pacifier and no supper before he gets to pardon any more cronies on the FBI's naughty list, or push the shiny red button that isn't on a certain reindeer's nose.

Spot us a Christmas gift, Canada, we in the Untied States desperately need ourselves a triage prime minister. At already six years old and with an impressive pedigree and stable social environment, the youngest Trudeau has got to be far more mature of a leader than Toddler Tantrum Trump...

Trump has a long history of levering bankruptcies into gold which propelled him into bigger and better scams as he refined the fine art of the Con. It was entirely predictable that he would launch a fury of legal propaganda in order to preempt being called a presidential failure or any thoughts of holding him legally accountable for anything. This part is simply reflexive but what is the future part of his strategy. Thankfully he does not seem to have a purely revenge motivated start a nuclear war and BITFD mentality. As always its how can he lever this failed con into something with even bigger and better rewards as defined by money, power and a family dynasty that propels his ego into eternity. Emperor or cult leader of the world is unlikely so it is likely winning the 2024 election and cementing in power immediately afterwards. No more mister nice guy! Unfortunately that unless they are very clever with paint and decorative patches the Biden team will spend the next 4 years bailing water and repairing damage only to be blamed for turning Trumps beautiful US Enterprise into a derelict.

RT: remember what Obama said after his first economic briefing : " Is it too late to abdicate ?" Then he, his administration and Joe got to work and fixed stuff.