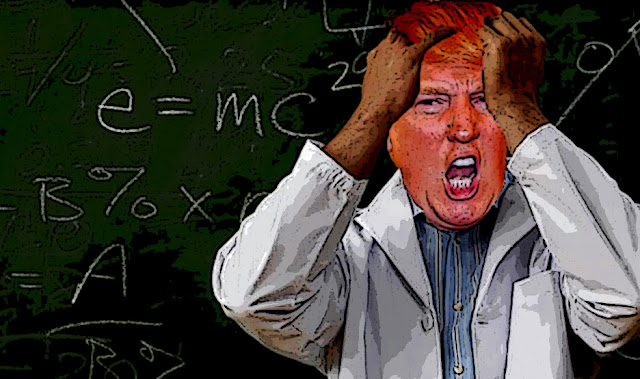 Donald Trump isn't playing the mad doctor any longer, and suggesting that you can cure COVID-19 by injecting disinfectant into your veins, or shoving a powerful light up your rear end.

Not after he was informed that poison control calls have been soaring.

Not after learning that his polls are tanking.

And not after he finally figured out that people are laughing at him all over the world. 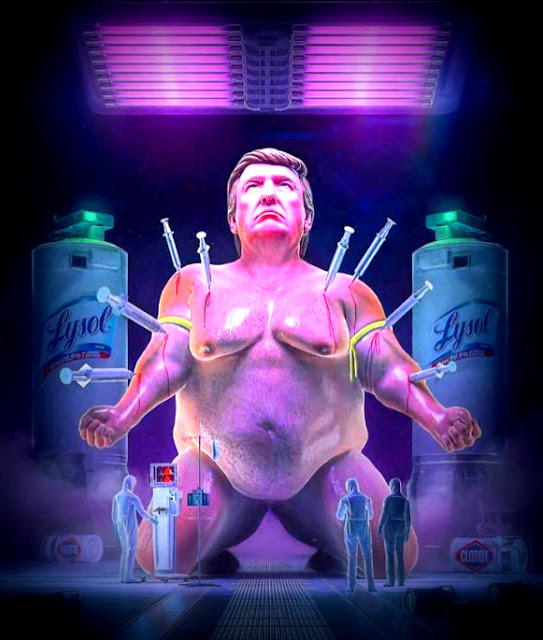 Including his nemesis Randy Rainbow...

Trump is too much of a narcissistic psychopath to understand what's really happening.

But I suggest he might as well have a swig of his own cocktail.

For the story will follow him all the way to the election.

And it almost certainly is going to kill him.... 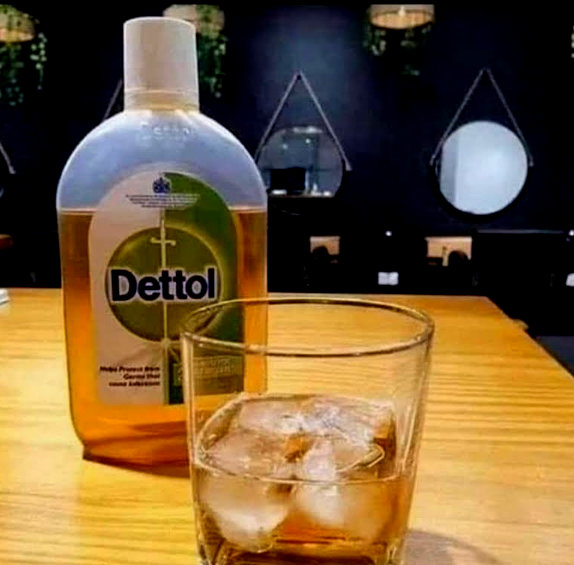 Labels: covid madness, Donald Trump, The Rise and Fall of the Orange Oaf

I'm not sure how much Americans will want to remember about the last two months. If the death toll is still rising next September, and they are in a Depression, then they might blame Trump for it.
The media is already trying to "But her emails" on Joe Biden, solemnly informing us about how he has to "answer" for a 17-year-old "assault" accusation. So far Joe is doing the right thing by just ignoring it, and I hope that continues.

Hi Cathie....I'm keeping my fingers crossed as well. The Con media is trying to blow up the allegation into a major scandal, but I think the biggest scandal is that Trump is still in power. He is the worst and most disgusting leader I have ever known, and as far as I'm concerned anybody would be better....

Thanks for the video Simon. These days we desperately need all the laughs we can get,

You know, if we had a family member or relative who behaved like Trump we'd be seeking immediate mental health treatment for him and subsequent placement into a home to protect him and others from himself. We've done a pretty good job child proofing these dangerous materials from children so there must be a way to adult-proof these things from the incredibly stupid among us. Let's pray one of his crackpot conspiracy theorists doesn't come out with a paper stating that nuclear fallout will kill the virus.
Thanks for the video, Simon. Randy never fails to deliver a good belly laugh or two, or three.
JD

Hi Cathie, from the looks of things down here, she appears to be 1) a bitter Bernie brat being signal-boosted by the rose Twitter cult and assorted MSM bros like Chris Hayes and Ari Melber; 2) unstable and an attention-seeker; 3) disturbingly and unironically in love with Vladimir Putin; and 4) a disgruntled ex-employee seeking revenge against her boss. "Believe women" doesn't mean be blind to mitigating circumstances in what amounts to a targeted smear campaign. Crying wolf only hurts us all.

I should note also that some other unhinged young woman was arrested earlier this week for attempting to kill Biden based on some QAnonsense she had picked up from the usual fringe sources online, and in which this "allegation" was mentioned as part of the same-old same-old campfire tales of the "Democratic Party sexual abuse cult". I guess she must have tried John Podesta's risotto recipe and found it too spicy for her tastes. Whatever.

But why does this all smell so familiar to me? Oh, because it was the same kind of Con hatchet job pulled against Justin Trudeau to make him seem "creepy," a "fake feminist," and "unpalatable to women". First with the Kokanee drive-by smear, then princess you-know-who's stinkbomb last February telling "her truth" which we know was a cooked-up lie, and finally Scheer and Wornout's perverse defamatory trial balloon about his teaching career in B.C. Now it's mostly dwindled to echo-chamber gossip about who's been staying in what cottage, with whom, and of course, what gender they are. Canada's branch office of the GOP have so far spent half a decade searching for a blue dress, a paternity suit, or a rent boy in short pants, and found absolutely nothing. So of course their inbred cousins want to pursue the same insanity, expecting more favorable results.

It's all so very predictable, from the same cookie cutter blueprint, and an obvious rodent copulation operation. I hope this blows over too, but the troubling thing is, facts don't seem to matter anymore. After all, they used to say in (where else?) Russia, "there is no truth in the news and no news in the truth."

Hi Simon, your image of Doc Trump has a vague resemblance to Frankenstein. Perhaps that explains why his vision of turning the US into Shangri-La with high walls and deep moats more closely resembles a medieval castle covered in gold paint to hide the evil. Isolation, high fences and concrete reinforcement may work to keep the 1% safe but not so much for the rest of us Clorox prescribed expendables. The modern day equivalent of "let them eat cake"

Hi anon....You're welcome. It's not easy to laugh nowadays, but they say it's the best medicine, so I'm going to do my part to try to cheer people up....

Hi JD....I haven't the slightest doubt that Trump is suffering from some kind of mental illness, but it's like the story of the emperor with no clothes, nobody seems to be able to tell him the truth to his face, or do something about it. But I think the pandemic may be what finally shocks the Americans into realizing what a monster he is...