Boris Johnson, Covid -19, and the Verdict of History 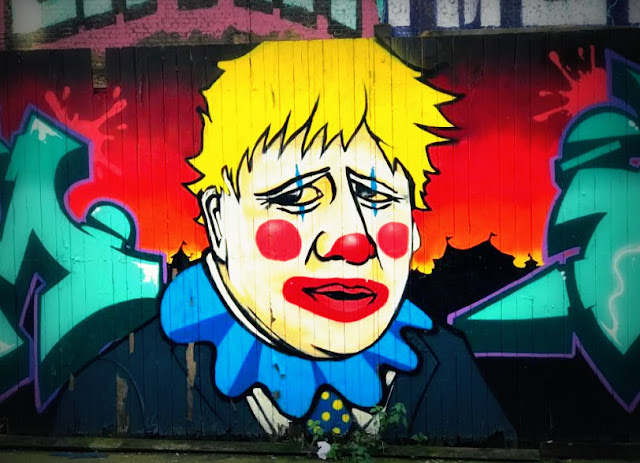 Because my parents live in Scotland, I'm forced to worry about the fight against Covid-19 in the UK where the Con clown Boris Johnson rules.

Who after surviving his close encounter with Covid-19, has been praising the NHS for saving him.

"I can't thank them enough. I owe them my life," he said in comments that were released to journalists and confirmed by his office on Sunday.

But has yet to admit that he was a victim of his own criminal irresponsibility.

Or admit that while he was lucky to survive, thousands of others who followed his bad example did not.

Including scores of medical staff who were not properly equipped to fight the virus. Which sadly shouldn't surprise anyone, since Britain's ugly Tories have spent years gutting the NHS.

Especially since so many people died just because Johnson and his bestial Tories didn't listen to the scientists. 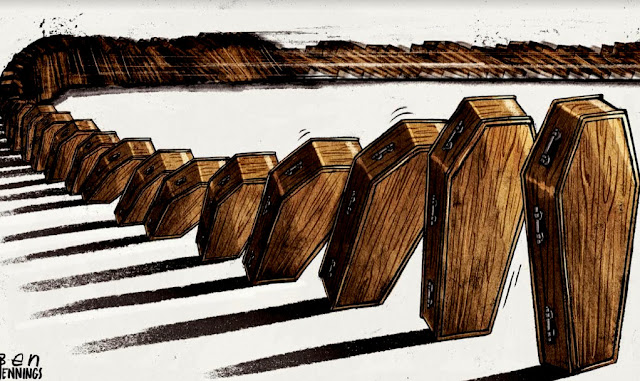 It’s now clear that so many people have died, and so many more are desperately ill, simply because our politicians refused to listen to and act on advice. Scientists like us said lock down earlier; we said test, trace, isolate. But they decided they knew better.

But what's really obscene, and what really infuriates me, is that although so many people are dead, Johnson is being treated like a hero for simply surviving.

There are now fears that Britain may have Europe’s worst death toll from the coronavirus, despite having had longer to prepare after watching the tragedies unfold in Italy and Spain. Experts cite an earlier lockdown, better planning, and strategies around community testing and contact tracing as some of the vital measures needed to manage the crisis. Some of these can — and should — still be put in place.

But rather than focus laserlike on these urgent matters, Mr. Johnson’s spinners and supporters in the press filled airtime by casting his health as a metaphor for the country’s well-being, his recovery as national resilience writ large. His leadership left Britain vulnerable and shamefully ill prepared, yet his popularity is rising. Thanks to cheering chunks of the national media, any blame will likely bounce off the prime minister as his terrifying brush with the virus is crafted into his comic hero superpower. 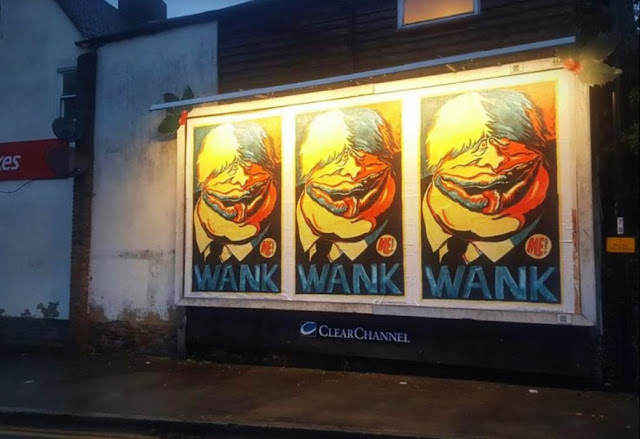 Some comic hero, some wanker.

Luckily, some in the media are starting to realize that Johnson is the wrong man in the wrong job at the wrong time.

No government could be fully ready for this: future lessons will be learned from South Korea and others. But this we know: our government is singularly unsuited to the task and unfit for purpose.

If Johnson blunders on as the economy collapses, then we shall truly know we are in the hands of fanatics.

Which is some consolation. But not enough to satisfy me. I am waiting for the day  that Johnson will be dragged before the court of history.

For I haven't the slightest doubt that its verdict will be a harsh one...

IDU Cons gonna con... speaking of which, I was glad to see that nobody besides Coyne, Fife and their ratfucking cousins at the Irrational Post cared about Turnbull's obnoxious remarks about Trudeau either. I only bring this up because just like Australia's misnomered Liberals which are nothing like Canada's governing party of same name, BoJo and Trump are monsters of Murdoch media, and the Melbourne madman behind Pox News is another cretin who needs to be hauled before the Nuremberg courts. Brexit will kill the NHS by opening it up to American cannibalism. This buffoon and his co-conspirators like Farage and Bannon have the blood of countless Covid-19 victims on their hands. Thank whatever mercies above that Canada dodged a nuclear bullet last fall, and doesn't have Yankee Doodle Andy in Ottawa tearing healthcare to shreds because he thinks Brexit is cool.

I have friends in the UK who think Boris is a "TWAT"!

Great post, Simon. The irony of bojo saying he owes his life to a health care system that he himself is destroying is nothing short of lunacy. Using his stature and sheer luck in having Britain's best and brightest to help him recover from the virus and turn it around to hide his governments many failures may work for a while but the reality of the situation will come landing with a tremendous, devastating thud. Couple that with his brexit nonsense and we will see the people of Britain struggling to recuperate from Covid 19 for a very long and painful time.
JD

The NHS is the model for our medicare system, so what has happened to it should be a warning to Canadians. Never let Conservatives run this country, or they will destroy medicare like they are doing in Britain.

I don't know if I agree with you this time though... bozza is a cool bloke IMO, and a Chad just like most British blokes tend to be...he might be a wanker, but still a cool one... just like jezza Clarkson or Hugh Grant 😉

Hi Jackie,,,,That Turnbull story was a nothingburger that only old Cons like Coyne and Fife could get excited about. I thought it made Trudeau look good, standing up to all those ugly right-wingers and letting them know that Canada can't be pushed around, And of course that he has better socks....😉

Hi Marmalade....yes, I know a few myself who feel the same way. And call him all sorts of Scottish names, that are too rude to mention. I just see him as a spoiled twit, who is far too dumb and lazy to be prime minister of a country where thousands are dying. And who showed such bad judgement he should be permanently quarantined and/or jailed....

Hi JD....I have always had good experiences with the NHS, especially after I had a motorcycle accident in the highlands a few years ago. So it has really bugged me to hear people, including some members of my own family, put down the NHS for long wait times etc. Even though any problems it may have are mostly the result of years of Con budget cutting and reckless privatization. So while I'm glad Johnson didn't die, every time I see him thanking or clapping NHS staff I feel like throwing a brick at the TV....

Hi anon....You're absolutely right, give half a chance the Cons in this country would do the same to our Medicare system as Johnson and his buddies have done to the NHS. Scheer and his buddies were ready to start cutting but fortunately we dodged the bullet...l

Hi Jsb....yes, I've heard that argument before, including from my brother. He is an entertaining clown, but he's so lazy he doesn't work weekends, and misses all kinds of meetings. Besides I could never forgive him for helping make Brexit happen even though he didn't really support it, didn't think it could win, and was only doing it to get Con MPs to support his leadership,ambitions....