Covid 19: How The Ignorance Of Some Could Kill Us 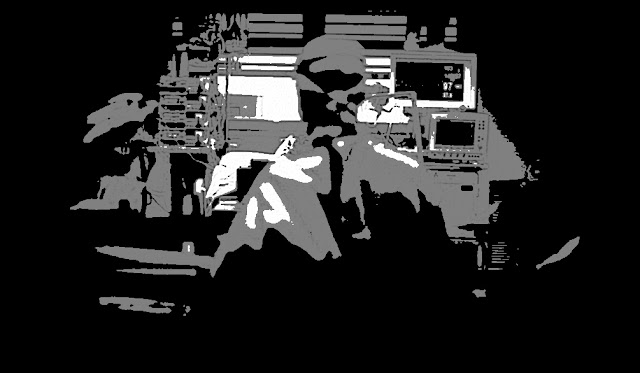 In my last post I looked at why we need to strictly enforce social distancing if we are ever going to get the Covid-19 pandemic under control.

So we can flatten the curve before a surge of sick people overwhelms emergency rooms in many hospitals across Canada.

And avoid the slaughter of doctors and nurses, the old and the vulnerable.

So you can imagine how I felt when I saw this. 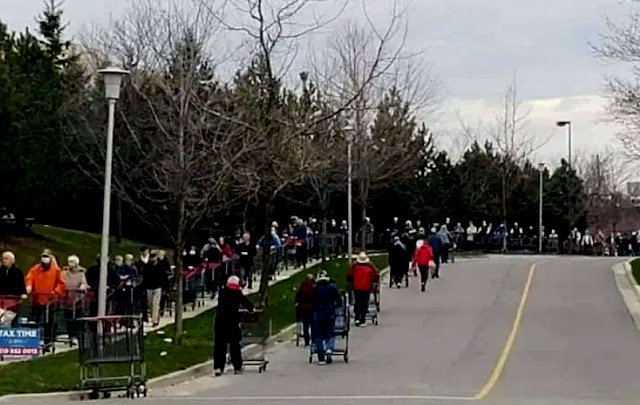 A large crowd lining up to get into a supermarket in London, Ontario.

Or imagine how I felt about this.

A man from southern Alberta has been charged with mischief after police say he tried to lick a product inside a food store as part of an online prank related to the COVID-19 pandemic.

But what bothers me even more is older Canadians who should know better but still refuse to social distance. Or claim, like this guy at Progressive Bloggers, that Covid-19 is not a real threat.

In WWII, people knew that fascism had arisen in Germany, Italy and Japan. And they fought it, and defeated it. Today, the majority are asleep, while fascism arises again. They have no idea what danger they are in. But they are afraid of a bug that is less dangerous than the common flu. This is problematic, to say the least.

And this is alt-right madness... 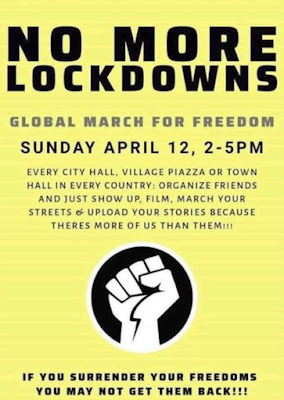 For Covid-19 is much much more dangerous than the common flu... 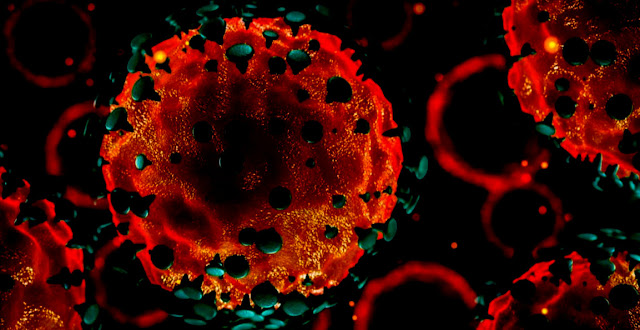 It can attack more than just the lungs. It can also attack the heart.

It spreads much more easily, than we first imagined. 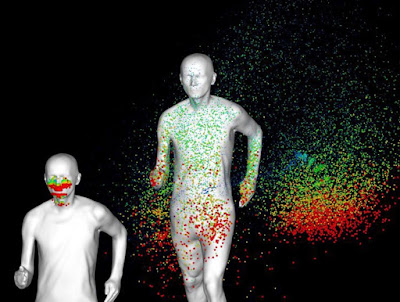 It can make strong healthy people too weak to walk. It can kill suddenly and horribly.

And it can turn an ICU into a war zone.

Nearly every person lying in a bed in the new intensive care unit, just as in the main one, was breathing with the help of a mechanical ventilator. There were patients in their 80s and in their 30s. Patients whose asthma and diabetes helped explain their serious illness. And patients who seemed to have no risk factors at all. Patients from nursing homes. Patients who had no homes. Pregnant women, some of whom would not be conscious when their babies were delivered to increase their odds of surviving to raise their children.

All of which to say that I deeply regret this decision.

For while most Canadians are acting responsibly, some need to be forced to comply.

Or the lockdown will continue forever, and ignorance will keep on killing us... 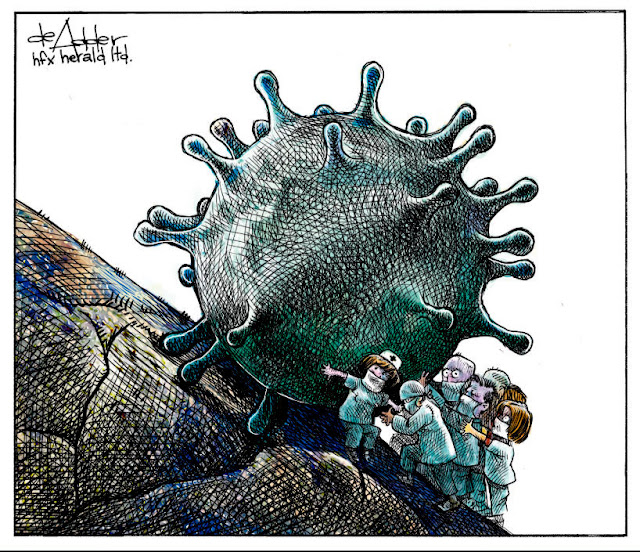 Hi Simon the problem with people has always been people.
We need to make a new template. Yes its Sci Fi but why not?

Sorry, Simon, but you were taken in, as many were, by a photo that shows how easily the truth can be manipulated through photography - if that is one's intention.

This link tells more about the story and how - using a different angle to photograph - it tells an entirely different story.

that link not working hmm, my incopetence or someone trying to silence the truth?
https://thinkingaboot.blogspot.com/2020/04/my-vision-for-world-post-covid.html

I watched PMJT's wartime-footing speech in the HoC. It was really quite remarkable what he said. I welled up when he spoke of his grandfather Jimmy Sinclair, and how what remains of the Greatest Generation today are in nursing homes. What happened at that home in Quebec and what is still happening in Ontario is nothing short of scandalous. Those homes are run as for-profit warehouses for people to be discarded. The premiers don't want the Emergencies Act invoked, but I think Elizabeth May is the proverbial broken clock who was right today: hindsight is 2020, and they may regret not giving him carte blanche to take the reins and do what needs to be done. But if SHTF they damn well better not pass the buck.

All that the PM is asking people to do is to think of others, to fight on the homefront by literally staying home. Canada is doing a much better job than the U.S., but there are still pockets of refusal -- which may not seem like a lot, except that every "body" counts. What's happened in the years since WW2 that so many of us have become unable or unwilling to make a shared sacrifice? Do they not get that it could happen to someone they care about too, even themselves, or do they just not care at all?

How did that Todd Ring A Ding ever get on Progressive Bloggers? What a mix, incredible arrogance and incredible ignorance. The ignorance that can kill people.

I don't even understand the queue in the photo. Was there nowhere else Londoners-in-the-bush could get groceries? People do have to eat after all. Was there some kind of mass panic? I've seen nothing like that where I live in Montréal. We do have to queue, but not for long, and people are courteous.

Yes, of course there are ignorant and worse, egocentric people. But is there any better solution? Standardised food packages can be poison for people with severe allergies like me (cow milk) and my neigbhour (seafood, which I eat with no problem).

I'd also like to see a better solution for poor people with no credit or debit cards (a deposit scheme?) Some can't even pay at groceries.

Okay, I have a solution, its not all that complicated, but its sci fi.
Okay people of Simon, I know the whole world is going to hell in a handbasket. Many people are losing loved ones left and right, its a cloud of tragedy hovering close to the ground. I have not been hit yet but I have so much at state it keeps me awake. My only son is diabetic and getting this virus may be a death sentence. I dont want to think about how that would change me forever if he should go.

Thats why I choose to think about anything else but that. So I think I should be appointed selected to parliament to lead the Ministrey of Sci Fi. This is a sci fi problem and we need an expert to deal with it. So please right Justin, Andrew and Jagmeed on my behalf and I present my CV below.

I allege everything and all text beyond this point should be considered a ploy to get a high paying government job for only telling people they should have read well and more widely.

First we need more scholars of Foundation to confirm math can predict history over a thousand years. I think we have enough data now to do this. The East/South Indian civilizations along with China have a 6000 year data base. So predicting a thousand years out should be simple.

Second we have to disclose the evil manipulate content of every goverment that has ever existed. I can only agree with Ronald Reagan one time the goverment is not here for you. They are only there at the bottom line for themselves. Self preservation is the only policy that matters. This needs to change. I have ideas but they are all sci fi so you will not get them until I am both appointed minister and win a safe riding.

The Covid crisis will move our world into the whole lifeboat/ bomb shelter cliche, but sometimes like stereotypes cliches are the truth.

As a Historical Economist with limited math skills its still easy to see, America will say
let the old and weak die to preserve the borders. In a hobson choice we face right now I have to agree its the right decision. However if I was minister of sci fi I think I could find a third way. We place all those at risk on the vacant cruse ships virus protected in every way. In two years we have a vaccine, and those that survive will have had a lovely cruise.

Now that is my straight up solution. Of course my conspiracy brain is working overtime identified anomalies that pinpoint the MAN using this as the final takeover of a society that was running faster than the MAN could keep up. (oil prices)

I know politics favours the competitive guy, so I would accept being first second minister of Sci Fi if any hack where the Minister, however I got to tell you I am better qualified.

Cottagegate or Eastergate or whatever you want to call it is one of the dumbest Twitter-bubble Trudeau derangement "scandals" I've ever seen. Boy is this guy ever Obama of the north. You'd think he wore a tan suit while on holiday, or put arugula and Dijon mustard on his gourmet nothingburger. They spent weeks complaining about him staying at home, and invented Q-Anonsense conspiracy theories about his marriage and "FBI house arrest." Then when he travels 30 minutes to be with his family (who he was already living with, so it's not like he was "risking infection"), they raise hell about a double standard and call him a "privileged elite." Someone ask Lilley and Malcolm if there were doughnuts sent to Harrington Lake? Did Justin wear Easter egg socks? Did he mock up his face as a chocolate bunny? Show us the data! This is vital information! Inquiring minds want to know!

But then, how about this? Come to find out, Scheer squished his entire family on a flight to Ottawa with two other MPs, when it was supposed to just be him on the plane so the passengers could practice social distancing. Talk about entitled to his entitlements! I guess Justin must have seen his shadow when he left Rideau for the weekend, because it looks like we're all going to get six more weeks, maybe months, of Scheer bullshit. The tabloid sniping from the chatterati is worse than the disease itself.

I hate to give props to Jason Kenney, but on the WHO is is correct. Its a cesspool we should distance ourselves from and our top health official should be making in Canada decisions, not listening to global political correctness.

He gambled and won on the protective gear, and I hate that.

Hi UU.....I looked at that other angle, and sure some people were maintaining a safe distance from each other, but some were clearly not. Besides I didn't want to single out one group, since unfortunately there are offenders all over the country, and they are threatening us all...l

Hi Jackie....I too am frustrated with those who seem incapable of shared sacrifice, especially since so many are risking their lives. But overall we're not doing too badly, and we are doing better than most countries...

Hi anon....I have no idea how that pompous asshole got on Progressive Bloggers, but I find his denial absolutely outrageous. But so typical of a certain kind of leftist who uses rigid ideology as a weapon and hasn't the slightest empathy for the humans they claim to defend...

Hi lagatta....There are better solutions for all the problems you mention. The store could have created two separate lines, or staggered their hours or whatever. And your right, something must be done to help poor people, so they can afford to buy decent food. One of the reasons so many people of colour are dying is poor diet which leads to things like obesity, diabetes etc which make Covid-19 even more dangerous...

Hi Steve...I see the pandemic has inspired you, and having a diabetic son is reason to be concerned. Just make sure that he is protected as much as possible and we'll all emerge into the sunshine soon enough...

Hi Steve....I got the link to work, but I have to warn you my alien planet is more powerful than yours, so I will be the King of the new world....😉