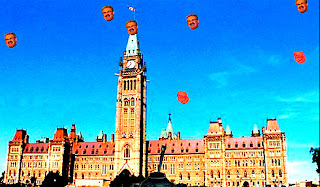 Four years ago, during a Listeriosis epidemic that killed 22 Canadians, somebody created a video game called the Cold Cuts Cannon.

Where you could fire cold cuts at little Gerry Ritz heads floating gently over Parliament Hill.

Pop his balloon so to speak, for having had the crassness to joke about the deadly crisis during a meeting with his subordinates:

"This is like a death by a thousand cuts...or should I say cold cuts," he complained. And when told someone had died in P.E.I., he said "Please tell me it's (Liberal MP) Wayne Easter."

And all I can say it's too bad that game isn't still online, because Gerry is up to his old tricks again. Avoiding the House of Commons for days, making jokes about a health crisis.

Absent the minister, the NDP’s Malcolm Allen offered to quote him this afternoon. “Mr. Speaker, we have not heard the minister answer a single question in the House this week, but he was a guest speaker at a luncheon in Battleford, Saskatchewan,” Mr. Allen reported, “when the minister said, ‘We had some great Canadian beef for lunch. I don’t know where it came from, I don’t care.’ ”

Dodging the media, or being hustled out of short news conferences by his aides, after answering only a few questions, in an obvious state of confusion... 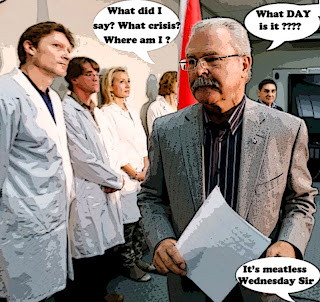 “We continue to enhance the capacity of the CFIA from both a budgetary and human resource perspective to get that job done,” he explained. “To make sure that it has the ability to capture any type of product like we see here, we build a body of evidence in our timeline AND ARE LOOKING FORWARD TO MORE RECALLS COMING OUT."

And heaping praise on the XL Foods plant. You know, this jewel in the crown of  Alberta.

One man who worked for an industrial company that had a contract with XL Foods told CBC News that he saw an employee go into the washroom wearing his protective gear during one of his trips to the plant. "Throwing it on the washroom floor in front of all the urinals and relieving himself and then picking up his garments off the floor. Picking up his scabbard with his knives off the floor and then returning to the production facility," said the man, whose identity the CBC agreed to conceal.

Oh boy. Welcome to Gerry's World, welcome to Con Canada, welcome to the Diarrhoea Dominion.  In any other country, with any other government, Mystery Meat Ritz would have been fired long ago. But XL Foods is Stephen Harper's kind of plant.

What we do know is that XL’s Lakeside plant in Brooks is a poster boy for Harper’s vision of the economic future. It is big — one of the biggest in the country. It is Western. It is resource-based. And it employs plenty of those temporary foreign workers that the current government has encouraged to come to Canada.

And Gerry is his kind of cracker. So he won't fire Ritz, although even Mike Duffy for heaven's hoof's sake said he should have done that FOUR years ago !!!!

Gerry Ritz certainly isn't a member of Mensa, and I would think after something like this, if he does get re-elected and the Tories are returned, while he hasn't been fired tonight, he might find himself watching events from the backbenches.

Except that four years later Gerry is still Agriculture Minister, Duffy is a Con Senator, Stephen Harper WILL kill government even if it kills Canadians. And the Cons are planning to cut more than $50 million out of the food safety budget. Even as more Canadians get sick.

And the good news? If the opposition can sharpen its knives, and put on its brightly coloured butcher's aprons, they can GUT the Cons like they never have before.

Up to now, the Harper government had sailed through its deregulation disasters unscathed. For his first five years in power, so did Mike Harris. But in the end, Walkerton became the symbol of everything that was wrong with Harris’ regime. And the government he had so painstakingly built was wiped out.

Wiped out? Isn't that a happy thought? Or should I say how ironic eh?

The Cons set out to kill government, only to sicken Canadians, and end up killing themselves in some monstrous Alberta slaughterhouse full of low paid foreign workers. And being served on a Ritz cracker.

Because that's the Con Story in a nutshell tiny coffin. And I couldn't think of a more delicious ending.

Stephen Harper and his gang are going to live with this stinking nightmare all the way to the next election.

And it WILL kill them... 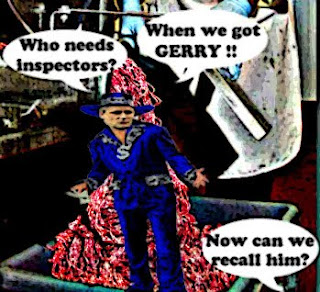 Gerry, Gerry, it's now meatless SUNDAY. Do something you idiot  #!%@!!

The E-Coli Cons are going down...

I gave up cold cuts in 2008 for good, as well as sausage and minced beef. Actually it all made me feel ill, not just the likelihood of poisoned meat but also the cold indifference of the cons to all those deaths. This time around I am giving up beef. In fact, I think it is time to make a serious attempt to become vegetarian, in Canada at least.

I also gave up cold cuts except those made on site in one specific store. They are incredibly clean. The type of cleanness needed to ensure food safety can not be attained in large plants such as XL. They are too focused on profits.

I didn't eat pork for other reasons. Now I'm afraid to eat beef purchased in supermarkets. I better pick up a few turkeys while I can

hi Fightfordemocracy...I have to admit that after all these horror stories, when I visited the meat counter the other day I felt a little queasy. Although I'm afraid that trying to become a vegetarian would probably be as hard as trying to make a tiger like carrots. Still, the way things are going in Harperland, and from what my doctor keeps telling me, I wouldn't rule it out...

hi e.a.f...I've tried to cutdown on cold cuts after reading some frightening report about how every slice of salami or whatever increases your chances of dying of something by some incredible amount. Of course, it doesn't help that Toronto has hot dog carts on every corner, and you know you good they are for you. ;)
Seriously though, after reading about the XL plant I want the government to investigate the meat industry because we're clearly in danger.
And of course, I also want someone to investigate the Con government for being so criminally irresponsible...

Canadians had to be asleep at the wheel when they 'voted' (and I'm not so that the robo called election was even legit) these right wing Reform Party morons into power. Hello? Walkerton anybody? Same gang of dimwits at the helm here.