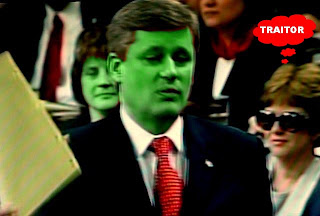 I switched on the tv this afternoon just in time to watch Stephen Harper turn green. Not because that fat Oil Pimp was trying to look like a born-again environmentalist. That cabaret act is over....

But because he had to kiss the Kyoto. And publicly admit he now now believes in the science of climate change. Smooch. Slobber. Smack.

"This government has made it clear in the election campaign that we accept the science and that's why we're acting."

Ooh boy...after spending his whole life as a climate change denier that REALLY must have hurt. No wonder he looked so green. Woohoo!!!!!! I love this show!!!!

Although I must admit this little Bairdy almost ruined it....

By jumping up and down during question period blaming everything on the Liberals.

If this nasty little neocon hawk doesn't get its claws trimmed soon....we're going to have to cage it. Or turn it into a boa....

As for the Alberta Oil Pimp Climate Change Denier and Environmental Impostor .......he's going to have to convince his most fanatic ReformCon supporters he's not a traitor. Good luck.

"Now that the prime minister has publicly changed his mind to bend to the current wind, we’ll all pay for it."

I hope so.... how about twist in the wind? BTW have you ever considered the Reform Party? Mwahahaha!!!!

Doncha luv the planet? Just when these filthy cons thought they could take turns raping it up the kazoo.It turned around and bit them. Just like Iraq bit Chimp Bush. Ouch!

Although that does remind me....the Oil Pimp may have his hands full convincing his rabid wingnuts that he's not a traitor. Just an impostor and a liar.

But he's also going to have to convince the rest of us that he's not a dangerous idiot.... 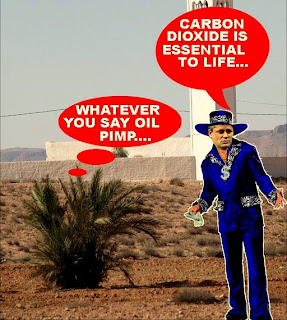 You see something in Harper's infamous but revealing letter kinda jumped out at me...

"It (Kyoto) is based on tentative and contradictory scientific evidence about climate trends."

"It focuses on carbon dioxide, which is essential to life, rather than upon pollutants..."

How could a so called leader be so wrong and so dum ignorant about something so important?

As if carbon dioxide wasn't one of the main greenhouse gases responsible for global warming.

"A recently issued report by the US National Oceanic and Atmospheric Administration (NOAA) of an unexpectedly large increase in carbon dioxide levels from 2002 to 2003 has raised concerns that the earth may already be entering a time of rapid and abrupt climate change.

Another more ominous possibility exists - that some of the increase could be due to a feedback effect that is amplifying the rise expected from human activity and that might kick our gradual warming trend into high gear...."

In short....if global warming causes oceans and plants to absorb less carbon dioxide...we may have only years....not decades to do something about it. And try to limit the damage.

Oh yeah....and if you ever wondered what a planet with too much carbon dioxide looks like...it looks like this one.... 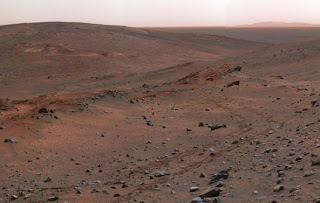 If we want to save our world all we've got to do is remember this....Stephen Harper is an Alberta Oil Pimp and a Climate Change Denier.

He put his right wingnut ideology before science. He put the interests of Big Oil before the interests of the world's children. And he was so stoopid ignorant he didn't even know what he was talking about.

He isn't a real leader just like he will never be a real environmentalist. This country can't afford him and his wacko government any longer.

And neither can the planet...

It scares me how many individuals out there can still buy his crap, while smiling the entire time. I have a hard time believing anyone with so much low cunning could be so blatantly short sighted. Money talks for Harper, literally. He panders to anyone that can guarantee his pockets remain lined.
He plays on fear tactics to manipulate voter opinion, and unfortunately the mass majority of voters get tunnel vision when you put the fear in them.
They will do anything to avoid said fears except further research to actually found or disprove their concerns.
Thank you for taking the time to present an informed platform for myself and concerned Canadians everywhere