Gay Rams and the Final Solution to the Gay Problem 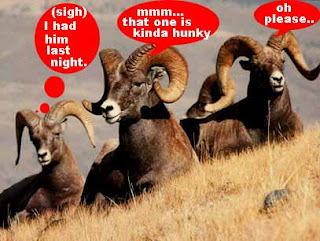 Holy Shit!!!! Run for your lives!!!! The crazy homophobes are after us....and this time they don't just want to convert us or castrate us or kill us. They want to wipe us off the face of the earth!!! Starting with the gay rams.

Scientists are conducting experiments to change the sexuality of “gay” sheep in a programme that critics fear could pave the way for breeding out homosexuality in humans.

Experts say that, in theory, the “straightening” procedure on humans could be as simple as a hormone supplement for mothers-to-be, worn on the skin like an anti-smoking nicotine patch.

Oh no. May the Cock and Pussy Gods help us!!!! We're doomed. Peter Tatchell may think only evil governments like Iran would try to wipe us out.

“These experiments echo Nazi research in the early 1940s which aimed at eradicating homosexuality. They stink of eugenics. There is a danger that extreme homophobic regimes may try to use these experimental results to change the orientation of gay people

But I think if all you had to do was wear it like a nicotine patch everyone would. Although I suppose some would buck the trend. To make a fashion statement. Like adopting an orphan in Africa.

But think of all the mistakes that could happen. All those girls with beards. And all those lost gay boys with nobody to love. Just like the lost boys of Asia.

Beijing expects that it may have as many as 40 million frustrated bachelors by 2020. The regime, always nervous about social control, fears that they might generate social and political instability.

Something tells me that whole region is in for a horrible lesson about what can happen when you fuck with the balance of nature. I bet the Chinese government wishes all those frustrated bachelors were gay. So they could have been happy. Instead of tearing the country apart....

I think humans will finally understand the role gay people play in the great scheme of things. As a buffer zone and safety valve. Let's hope they don't learn it too late. Just like the Chinese have.

But if our days are numbered...... all I can say to straight people is you'll miss us when we're gone. It's going to be a very drab world. You'll be bored out of your minds. You'll all look like shit and live in plain and ugly homes. You'll have to find some other people to insult or beat up on.

Maybe instead of spending so much time and money looking for the Final Solution to the Gay Problem... These crazy scientists could serve the planet better. By identifying the homophobia and genocide genes. And destroying them instead.

In the meantime....if you are planning on enjoying a nice lamb roast. Check with your butcher first. 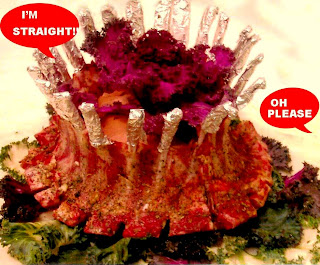 Imagine a world without hairstylists and decorators, sorry, had to do that.

Mother Nature doesn’t like being played with and I suspect the crowd that likes this idea is the same crowd that thought it was good idea to beef to cattle.

The only good that might come out of those experiments is they could prove once and for all that homosexuality is not a choice but part of nature. After that it’s a judgment call.

I'm thinking of changing my major to genetics. I want to go work with those scientists, use their research to develop an anti-hetero patch, and sneak it on them with a friendly matcho butt-slap a la the NFL.

Then I will laugh all the way to a very tastefully decorated bank. :)

Good for people to know.