Holy virgin Mary!!! Hit me with a bowl of porridge. It looks as if the Catholic Church has found a new group of helpless children to victimize. British orphans.

The leader of the Roman Catholic Church in England and Wales has said adoption agencies will close if they cannot opt out of new gay rights laws.

Isn't that sick? Make little orphans suffer because of their evil homophobia. My only question is..... how did these poor kids ever end up in the hands of these twisted monsters in the first place?

The ones who abuse little boys and little girls. drive gay teenagers to suicide, and attack gay couples like a pack of rabid dogs in dresses. While frolicking like queens in the perfumed gardens of the Vatican.

Fabio Canino says he received a mysterious invitation a few years ago to lunch at the Vatican with a cardinal. “I walked in,” he remembers, “and I thought the person in front of me was a drag queen, not a cardinal.” He flings his arms up in imitation and cries out, lisping, “Hel-lo, sweetie!”

The prelate, he says, eagerly dished his Vatican colleagues, referring to one black cardinal as “Naomi” (after Naomi Campbell). As Canino tells the story, he called the cardinal a hypocrite and asked how, as a gay man, he could serve this homophobic institution. The cardinal looked at him across the lavish table where they sat and said, “I have everything here.”

They are the real perverts. No child should be allowed anywhere near them. It's time to take away every orphan they have and place the poor children in secular orphanages. Where they can't be fondled by priestly monsters....or have their minds corrupted by their hateful mumbo jumbo.

And then there are the latest holy men in a dresses to join the fray..... the Arch-Bishops of Canterbury and York. And the yankee poodle and closet Catholic Tony Blair.

So much for the winds of change....

The Church of England put pressure on the Prime Minister last night over the gay adoptions row with a letter giving warning that “rights of conscience cannot be made subject to legislation”.

"The Department for Education and Skills, which is responsible for adoption, did not agree that children’s interest would be damaged (by the closing of Catholic orphanages) on grounds that Catholic agencies made only 4 per cent of placements while gay couples tended to accept harder-to-place children."

That's why we're better than these religious homophobes. Who would deny our humanity. And make orphans suffer....and worry about being thrown out of the place they call home. You can't get any lower than that.

Although I suspect that if somebody asked those poor helpless orphans what they wanted......they'd probably just say something like this.... 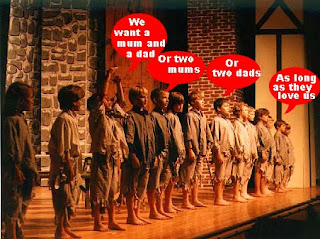 If you were in their shoes and didn't have a real home.

What would you want?

hell, if I was an orphan, if I couldn't have gay parents I would at least want some gay relatives. it's hard to unlearn years of hetero saskatchewan fashion. I'm making srides though, haven't worn mismatched socks on purpose for a couple years now. :)

Hey Jay....don't worry ...if think you rubes have trouble with socks you shouks see what problems we gay guys have with....underpants. I mean really...besides I'm afraid our fashion sense is much overrated. I'd put the slobs in this house up against anybody...

As for the orphans it just makes me vomit. But then I think that Canadians shouldn't be allowed to adopt children abroad until every Canadian orphan has a real home...I've even thought of adopting a child myself ...for about five minutes. The way I figure it our reform schools are packed. I once had to sleep in the laundry room. And who needs another juvenile delinquent?