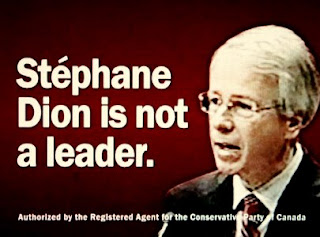 I must say I find it quite amusing to see the nerd Stephen Harper accusing the nerd Stephane Dion of being a useless nerd on the environment ....with those ridiculous attack ads. Especially since I also believe they are going to backfire.

".....They show the Conservatives are worried about Dion but more importantly, they'll simply reinforce Canadians' perception that the government isn't serious about the environment and views it as a PR battle to be won...."

And then there's the whole idea of running Canadian attack ads in an American football game. That's so tacky and American it's got to hurt them.

But what I can't understand is why the nerd Dion is doing such a pathetic job of fighting back. It's pretty clear the ReformCons are out to destroy his environmental credentials. Or in filthy Con talk..... make him appear as bad as they are.

So I think he should be taking off the gloves. Instead of sounding like a Jesuit priest on crack. Or looking like St.Sebastian

And so does Tom Axworthy.

Dion must respond immediately. The Liberals should cut their own series of ads, linking Harper’s Republican Lite game plan to the negative politics of disunity that so disfigure the electoral process in the United States. Dion cannot allow an impression to grow that he is a scholarly and honourable man not quite up to the cut and thrust of modern politics...Dion must show that he cannot only take a punch, but give one back..."

He still seems to think that Parliament is some kind of university where you can convince even your sworn enemies that you are ALWAYS right.(yawn) Instead of a House of Pigs where you try to kick the filthy neocons in the nuts.

He needs to understand that he isn't addressing a classroom of university students anymore. Now he's speaking to the rabble. And for them one image is worth a thousand words.

So for example when Harper calls you a useless nerd who didn't do enough about climate change, You don't argue with him about who did what or not. You just call him a yankee stooge neocon who denied climate change was even a problem. Just like Chimp Bush did. Even as the planet burned...

And to make sure it sticks ...you call him an Alberta Oil Pimp as well.... 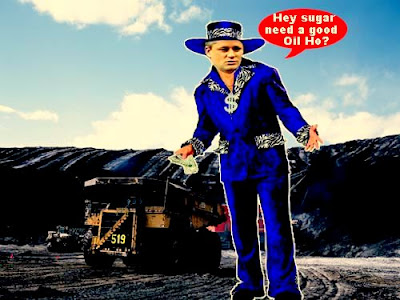 Canadians may not know that Harper has been a climate change denier all his life. A tool of the Alberta oil companies who pull the strings in the Conservative Party. A parrot of the Calgary oil executives who are selling out our energy interests. And making Alberta the Oil Whore of Amerika.

They may also not know that Harper has fought any kinds of controls on greenhouse gas emissions because the oil companies didn't want them. Or that he once called Kyoto a "socialist scheme"

"Kyoto is essentially a socialist scheme to suck money out of wealth-producing nations...."

Or that Harper belongs to a church that believes the world is going to end any day. And that fighting global warming is pagan "earth worship" that could delay the return of the "Messiah."

Or that until recently Harper publicly mocked the science of climate change just like Stockwell Day did.

But something tells me Canadians are going to find out what kind of a phony born again environmentalist Stephen Harper really is....on YouTube ......and when they do ...I'm sure they'll recognize a yankee blowing Alberta oil pimp when they see one.

hi anonymous...thanks for reminding me about that post. What with the Copenhagen summit on, I think I'll change a few words and names and run it again.
I'm not retarded but I am lazy... ;)