The ReformCon Pig Shuffle and Other Crimes Against Nature 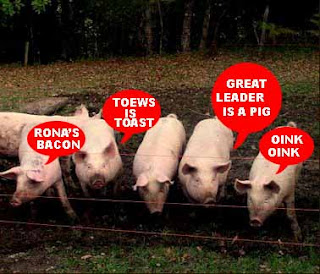 I guess the picture really says all there is to say about Great Leader's ridiculous little ReformCon pig shuffle.

But in case you missed it...here are a few extra program notes.....

The whole thing was a shabby farce designed to try to sugarcoat the fact that the incompetent klown Rona Ambrose was being dumped. Big Time. After making us the laughing stock of the entire civilized world. And fucking Great Leader's chances to fool Quebecers into believing he's anything more than a right-wing nut. Everyone knows that Harper handles Intergovernmental Affairs himself. At least the important Quebec part. So that means the Village Idiot will only be the Minister of Pork for Alberta. Isn't that's a perfect fit? Oink. Oink.

Then there's the demotion of Vic "Mad Dog"Toews from Minister of Justice to President of the Treasury Board. What a farce. I know he was a disaster. I know the wacked out old Reform homophobe wanted to jail 10-year-olds. So he had to be booted out of there before he jailed everyone. But Treasury Board ???? Huh ???? Don't they know he can't count? 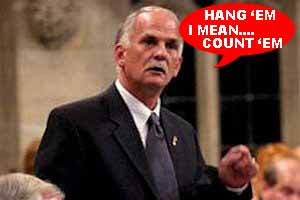 I mean isn't that basically what he claimed when he was CONVICTED of violating the Manitoba Elections Act for exceeding campaign spending limits in 1999?

And then there's my absolute fave....John Baird.....our new flaming Minister of the Environment.

You know the little birdy that everyone in Ottawa says is gay....even if he won't sing it out. 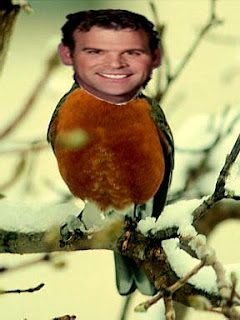 Yikes!! I don't know what to think. At least he's smart enough to recognize it's getting warmer. Duh? Something the Village Idiot never did.

And I still can't really believe those gay reports. Even though my gaydar is off the scale. I mean how could a little gay birdy be such a nasty neocon hawk?

Besides if he really was....... wouldn't that make Mama Harper look like a fag hag?

I love John,” Mrs. Harper said yesterday. “He is a great guy, he is fun to be around, he looks good in a tux and he is a great date. He is also a lover of felines.”

Uh oh not a lover of felines too....that's always a bad sign. Not that being a fag hag is a bad thing. In fact it's a good thing. Especially when she rides choppers like Mama Harper does. But what the fuck does that fat little hawk know about the environment. And what the fuck IS going on at 24 Sussex Drive? Is the Bairdy Great Leader's eunuch? I want the video!!!!!!

The Blogging Whories have been blowing him like a balloon. Barf. But he's a pretty squalid catch. A crass opportunist with the worst wig in the House of Commons. And a quacking homophobe kumbubble too ....

The way I see it he's now in the right place. His defecation was a good thing. One stinking homophobe bigot less in the Liberal Party. One more turd in the Tory toilet..... 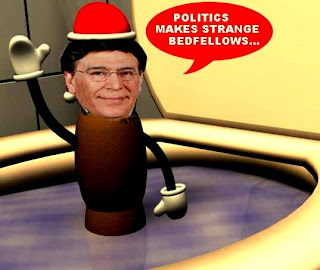 Now all we have to do is flush them all into the sewer of history.

And make sure that little birdy falls off his branch.....