What are we hiding in Afghanistan? 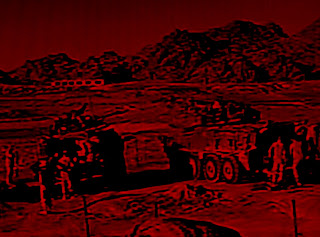 I'm happy to see the group of MPs who have been held under virtual house arrest at our military base in Kandahar, have been granted temporary parole. Allowed to travel about a kilometre outside our little Alamo....to tour an Afghan army base.

The group had been confined to the Canadian base at Kandahar airfield since they arrived on Tuesday, under orders from Defence Minister Gordon O'Connor.

"Technically, they went outside the wire, but they were still within a secure perimeter of the airfield......"

Wow!!!! I'm impressed. Although by the way O'Connor and his chickenhawk Generals decide these days what Canadians can or cannot see you'd think they had something to hide. And maybe they do...

The truth is our media coverage of the war in Afghanistan is a joke. All we get are live hits by reporters out of our Kandahar base repeating what the military tell them. Or the jingoistic reports of Christie Blatchford and Rosie DiManno. About how manly our soldiers are.

Or little photo-ops at some dinky project, with a rent-a-crowd of Afghans pathetically grateful for practically nothing. Not that they dare say anything else with heavily armed Canadian soldiers all around them.

But then a few days ago a group of Canadian reporters decided to give the military a miss....and travel way beyond the wire into the Forbidden Zone. And what this guy saw there haunts me still....

Hundreds of piles of fresh stones mark each new plot. Bits of green and white burial shroud tied to two-metre-high sticks have been tapped into the arid soil near some of the graves; green symbolizing Islam and white for the Taliban.

Many of these people were local farmers, coerced by Pakistani-based insurgents into fighting better-armed NATO soldiers or whipped up into a religious froth by Taliban claims of western outrages.

The farther we went up the road, the tighter the knot in my stomach became - especially as we passed flattened compounds, burned fields and a mosque that our guide told us had been used until just recently as a Taliban command post...."

I don't think it's possible for anyone to hate the Taliban as much as gay men do. We're the ones they threw off tall buildings. Or crushed under brick walls. So I'm a sucker for the noble part of our doomed mission. And war is hell and people do get killed. 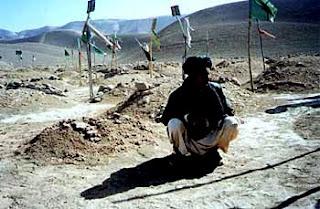 But massacring legions of local farmers wasn't part of the bargain. A road lined with the graves of scrawny dirt poor people ....who died on the land where they were born..... isn't the kind of monument I want Canada to leave behind in Afghanistan.

But as I've mentioned before that's what happens when you don't have enough soldiers to do the job. If we had a stronger force we might have been able to encircle small groups at least, and talk them into going back to their fields. Or paying them to do that .....or whatever.

But since we don't. And we can't afford to take casualties like we did last year ...for political reasons. We just call in the American planes and helicopters. And they kill them all.

Just like they killed this other group of Taliban recruits. The ones wearing plastic bags instead of boots.

Just like they end all their battles. Not with a bang but a boom.....

And we're flattening mud compounds....just like the Soviets used to do....

I don't know if Canadians really care about the war in Afghanistan.....unless our soldiers are killed. Right now it is what's called a "neutral" issue. But we're killing a lot of people in that country so we have a moral responsibility to take a close look at what we're doing.

If we're going to have a real debate we need to know what's really going on there.

Any attempts to hide the truth will only come back to haunt us later. But by that time it might be too late.

Our Afghan Highway to Hell won't just be paved with good intentions.

It will be lined with the bodies of tens of thousands of Afghans.

I would go so far as to say that a small majority of ((insert citizens of any country here)) do not care about anything until they are prompted by the media into being outraged by the latest atrocity or celebrity divorce or pantyless "starlet" or whatever. But like the attention span, the outrage rarely lasts long enough to inspire most people to actually say anything, let alone do anything about anything.

If I didn't want to return to Canada (because of family & friends being there) after finishing university here in amerika, I would renounce my citizenship and live as "off the grid" as possible.

For every time I find hopeful signs in humanity, there are a hundred hopeless signs. But being a bit of a sado-masochist, I still keep trying to find reasons to hope.

I could use a drink, but the state I live in won't import anything from Unibroue unless it's an overly expensive "special order". LAst I can remember, my favourite beers are all 6% or higher, which Iowa (and two other states) place pretty strict restrictions on who can import it, and ordering it requires one to go through the state board, and they tax the tits off it.