The Chimp, the Chinese and the Coming Oil War 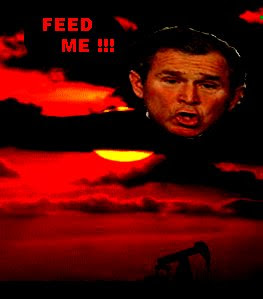 It didn't surprise me a bit to hear Chimp Bush call tonight for a twenty per cent cut in U.S. oil consumption. Although it does defy belief. A Texas pimp for Big Oil calling on Americans to cool their jets. Isn't that like a fox claiming he wants to save the chickens?

What really did surprise and shock me was what little play in Canada this story got.

U.S.and Canadian oil executives and government officials met for a two-day oil summit in Houston in January 2006 and made plans for a "fivefold expansion" in oilsands production in a relatively "short time span," according to minutes of the meeting obtained by the CBC's French-language network, Radio-Canada.

Talk about making Alberta the oil whore of Amerika. Talk about selling out the energy interests of Canada. Chimp Bush and Dickhead Cheney may want to reduce Amerika's dependence on Middle East oil. But they're counting on Canada to make up the difference. Big time.

We're already pumping more oil into the pig than anyone else. Now they want even more. One day they'll want it all...

But surely what the Chimp's speech, and the little Texas Sellout do make abundantly clear...... to even the dummest of Canadians...... is how desperate the United States is to get its paws on as many oil sources as possible. Before reserves start to decline. And before others get their mitts on them first.

Like the Chinese for example..... Or did you think that this story had nothing to do with all of the above?

After the Americans, the Chinese are the oil pigs of the world. And they're getting thirstier and thirstier.Which as oil reserves can't keep up with demand...will eventually place them on a collision course with the U.S.

"You have two powers competing over the same sandbox.... as a country of China's size grows, there will be a moment when the moment of reckoning comes....."

Since seventy percent of known crude oil supplies are in five countries in the Persian Gulf region ......guess where the Chinese will eventually have to be? As well as off the coast of Africa...and maybe off the coast of Venezuela. To do that they need a modern deep sea navy. If you don't think they're serious about that. Just check out this video.

Ok they still have a long way to go .... but you don't need much of an imagination to see what the future could look like.

By the time Chimp Bush's target of 2017 rolls around the Big Chinese Machine will be starting to run out of gas. Imagine millions of unemployed workers. Or millions of people with cars who can't afford to drive them. Add to that the forty million bachelors who will never be able to find a woman to marry or whatever...and you can see why the Chinese not only need all that black stuff. Heck they might even need a war....

So here's the bottom line. Unless we take drastic action to reduce the planet's dependence on oil. And move into a post-oil economy. And do it fast. We won't just have to worry about global warming frying our world.

We'll also have to worry about frying ourselves.... 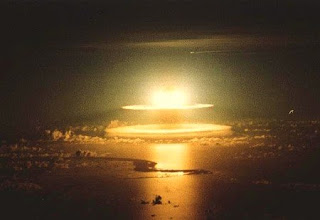 Which leaves me with one haunting question....

Why do so many Canadians still not understand that Stephen Harper and his Alberta oil pimps are the worst possible government we could have during these dangerous times?

The Harper neocon oil pimps have complained about the Radio Canada story.

Notice how they don't defend the sellout. They only claim the meeting wasn't secret.

If it wasn't secret why did it take a year to get out? Something tells me the filthy ReformCons are really sensitive about this story. Remind me to keep drilling that nerve...

We are ok up here in Canada, we now have the second largest oil reserve in the world thanks to our Oil Sands :)

Also, United States have a agreement (more so alliance) with japan and india. US are cornering the chinese. They want to control all oil that runs to china. If China was not communist, the people would have knowledge and demand action. Good thing china is communist! Right now, the chinese are ignoring the united states (and a good thing too for us)

Dont ask me how I know this :P

Hi Rashid brother!! Hey I hope you're right.I'm just worried that Alberta is going to sell all that oil to the U.S and there won't be any left for us. And two that the Chinese are going to get really thirsty and come after us one day. But I won't be sorry if I'm wrong. Not just because we won't have World War Three. But also because you're starting to sound like an optimist!!! ;)