The Good Little Mosque and the Big Bad One 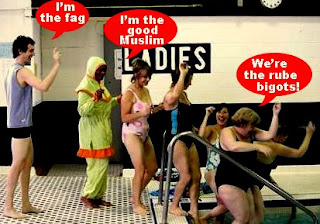 I forced myself to watch two episodes of the Little Mosque on the Prairie. Which wasn't easy because I never watch any soap operas on tv. Not even Grey's Anatomy...

I get all my television entertainment watching the nightly news. Why settle for cheap and predictable comedy? When you can laugh your head off watching the end of the world...

But I thought Little Mosque was kinda cute. In that dum, gentle, self deprecating Canadian way. And I love the idea of defusing hate with laughter. So I was really happy to see most Canadian Muslims seem to be enjoying the show.

"More extreme Muslims are telling our youth that Canada is not interested in our community, so something like this works dead against that type of mentality...."

"The youth see it on television and say, hey, they recognise us and they actually made an investment to talk about us and our life in Canada..."

Wow!! What a concept. Show Muslim Canadians on the screen acting like any other Canadians. Reflect their lives and make us laugh with them instead of fearing them. And maybe they'll feel more at home in their home. Brilliant. In these troubled times that's good enough for me.

Although some of the stereotypes are a little too much. The Mean Rubes are like cardboard cutouts. And did they really have to make the token gay a WATER aerobics instructor? Although I suppose we should be grateful that they didn't hire Richard Simmons for the part. And make him a Muslim convert..... 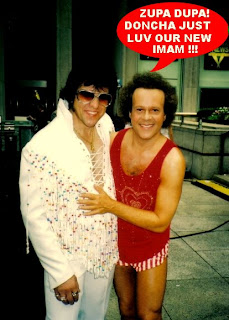 "If I were to call homosexuals perverted, dirty, filthy dogs who should be murdered, that's my freedom of speech, isn't it? But they'll say no, I'm not tolerant."

Uh oh....now I'm confused. Which mosque should I believe in? I'm pulling for our little Canadian one. But can we be sure that what's happening in Britain......isn't happening here?

Or couldn't happen here now that the monstrous theocon bitch bigot Jason Kenney has been made Minister for Multiculturalism.......

Kenney is Stephen Harper's secret ambassador to the religious wingnuts extremists. His idea of multiculturalism is to recruit new immigrants to the ReformCon Party by whipping up their fear and hatred of gays and lesbians. Just like some of those crazy Imams do.

Although I shouldn't be too hard on that Klan Klown Kenney.... You know when Sebastien was away I had a lot of trouble trying to remain faithful to him. And not get laid. It was so hard. Everyone started to look good to me. Even the ugly right-wing runt Rex Murphy....at least from behind....

But just when I was about to lose control, I thought of "Mr Chastity" Jason Kenney..... 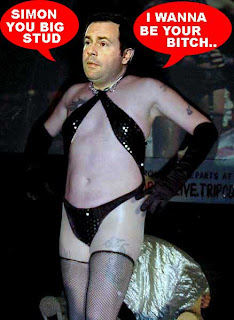 And that ALWAYS worked....

Besides it gives me an idea...... I think he's just the person to play the pathetic drag queen in my spanking new production....... Little Gay Bar in Alberta.

I'm just about ready to send the script into the CBC. But I'm not sure what to call it. I'd like to call it a comedy of course. But since it's about a poor deluded wouldbe gay bar owner. And Jason Kenney is in it. And he's always waiting for his cowboy. And it takes place in a real rube town in Alberta....with real rednecks.

I think I better call it a comedy drama.

I tried watching a couple of episodes too and I have to admit I’m more a news and information type like you, we’re freaks and I don’t have a problem with it.

I can’t help but think it is less inspired than the hype CBC is giving it. My first impression was that it’s meant to compete with Corner Gas and do it one better with timely multiculturalism, ie, Muslims, both shows take place in small prairie towns. Highly improbable, if you’re a Muslim in a small Saskatchewan town, you’re pretty much alone. Call me a cynic, I’ve worked in advertising too long but I call them as I see them and CBC is worried about bucks. That’s what I know.

I love the idea about Little Gay Bar in Alberta, but, Jason Kenney? Now you’re just being bitter.

I thought little mosque was cute, but not that funny, but then I'm like Bruce - a newsworld type. LM is watchable, but mostly because the imam is cute :p I wanted it to do well though, because the wingnuts just hated it sight unseen because it's about muslims.

Little Gay Bar on the Prairie will be next. With Scott Thompson as Buddy Cole, the newlywed bar owner who has to go to alberta when his husband gets a job working in the oil patch.

I agree with both of you...I am hoping for the show to be a hit...but it's really just more CBC pap. They never take any risks...the new face of Canada is never reflected. And as for OUR lives forget it...If they are not stuck in the 19th Century harkening back to a time when most English Canadians called themselves British...or copying Brit tv shows...they turn us all into cheap but safe stereotypes...and make us appear as boring as bat shit.And Bruce you're also right about the Kenney Bitch. I am bittah!! That nasty little theocon is the Harper minister who spends the most time dealing behind the scenes with people like the porker McVety. Besides he's the Chastity Champion so how could I not hate him? ;)

"Little Mosque" depends of offensive stereotypes for its humour.

Also, while at times funny, I do wonder about how "real" the situation is. I once saw a show about how the Nazis made two propaganda films about the conflict between the British and the Irish. The films, at least according to those who were interviewed who had seen them were quite good. The only problem was that the people in the movies were not Irish. What I mean by that was that the culture of the Irish portrayed in the films in no way reflected actual Irish culture as I guess the Germans who wrote, produced, and acted in the movies never took the time to get to understand the traditions and feel of the Irish people. It just wasn't important to them because in the end it had nothing to do with the Irish. It was as one commentator of the movies said "Germans talking to Germans".

And that is kind of what I am getting with the "Little Mosque" show. In the end it isn't really about small town Saskatchewan or Muslim communities living within small town Saskatchewan. In the end what it comes down to is just Liberal Urbanite Canadians talking to Liberal Urbanite Canadians, with their political message being far more important to them than whether or not the situation portrayed reflects a real situation in the country accurately enough.

By the way, why does "The She Mayor" remind me so much of the mayor on South Park?