Chimp Bush and the War with Iran 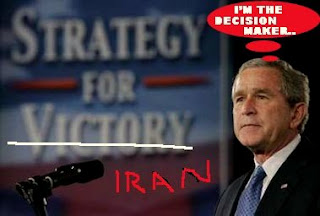 Uh oh.....panic in Washington. The Republican Reich is falling apart. The Chimp is in the bunker. And now he's not just stoopid. He's absolutely nuts. Now he's not The Decider, he's The Decision Maker.

"American troops in Iraq have authority to kill or capture Iranian agents deemed to be a threat, officials said Friday in describing a tougher stand toward Tehran and its suspected meddling in the nearly four-year-old war."

Oops....I hope that doesn't mean kill this Iranian agent. That could be messy.

"Those who suspect Sistani's true intentions are quick to note that the country's most powerful man is not even an Iraqi, but an Iranian...."

The Chimp and his chumps just don't get it. The Shia in Iran and Iraq have ties going back centuries. The Iranians will always be in Iraq. Just like the Iraqi Shia will support Iran if it's ever attacked by the U.S.

Just like Bush and Cheney appear determined to do. Not just strike at the nuclear installations. But crush Iran with a massive show of military might.

"Weapons of mass destruction will provide the rationale for military action, though it won't be limited to attacks on a few weapons factories. It will include limiting Iranian retaliatory capability, using bombers to destroy up to 10,000 targets in the first day of any war, and special forces flying in to destroy anything that's left."

Bush and Cheney may be gambling that the American people will close ranks behind them in the face of the terrorist wave that would follow. Or maybe they really believe that history will prove them right. That oil WAS everything. And Amerika had to have it. Or die.

Or maybe The Chimp is now so crazy he thinks he's paving the way for The Rapture.

All I know is that if the Congress and the American people don't stop these neocon maniacs in the next few weeks..... sometime in February...... we could be living in an even scarier world...

Which reminds me...it is the weekend...and I'd hate to end on such a note of doom and gloom. I mean think of it this way...the world may be on the brink of disaster. But the Republican Reich is already there. These nazi neocons aren't just tearing themselves apart. They're imploding and exploding at the same time. Oh what a beautiful sight!!

Besides if we're going to be cowering under our beds soon...now is the time to live it up!!! You know...do fun things....drink a lot...have lots of sex, or just dance a lot like this guy did....


Oh what a beautiful world!!!

Enjoy it while you can...

"The Decision Maker" -- good catch, I totally missed that. LOVE that video.