Why It's Important to Remember the Montreal Massacre 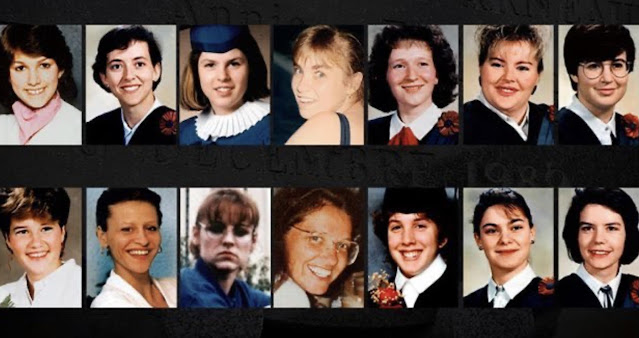 It's been 32 years since their young lives ended so suddenly and so brutally.

If they had lived some of them could could be grandmothers today, with daughters attending the same engineering school where they were murdered.

The École Polytechnique, where they were studying, determined to show the world that women could be just as good engineers as men.

Only to have all their dreams shattered, on a snowy evening in Montreal, by an angry man with a gun.

Years ago, when I started blogging about the tragedy, I used to get a lot of vile, threatening comments.

With many of them claiming that the tragedy was the work of a madman, and that misogyny had nothing to do with it.

But it was misogyny, murderous woman hate... 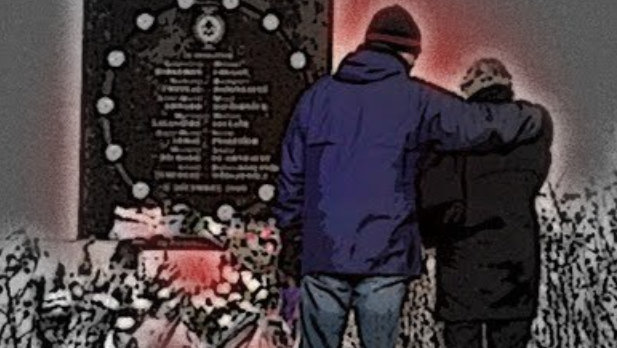 It may have happened in Montreal, but it's a Canadian tragedy.

It has been decades since the mass shooting at École Polytechnique, but the Montreal tragedy still  burns in the hearts of Canadians who paid tribute to the 14 victims throughout the day Monday.

Serge St-Arneault, brother of Polytechnique victim Annie St-Arneault, said on Monday that the gunman "had disfigured the face of humanity where each person is a sacred story."

A tragedy where the numbers are getting even more murderous.

The number of women who were victims of homicide has risen in Canada over the past two years, according to preliminary data that researchers say reflect an increase in lethal domestic violence caused by the COVID-19 pandemic.

That's why it's so important to remember the Montreal Massacre.

They were strong. They were smart. They were women. And they were murdered because of it. We cannot allow this gender-based violence to exist. So today, as we honour the memory of these 14 women, let us all keep working to end this violence - for good. https://t.co/QFV7lkOMoZ pic.twitter.com/Ib6r2oxhoX

Remember who they were, and how they died.

Fight misogyny wherever it rears its ugly head. Fight the Cons who would flood our cities with even more guns.

So that so many years after they were murdered.

The women of the Polytechnique can finally rest in peace... 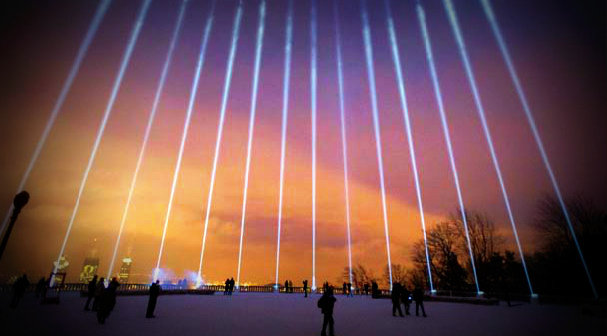 So why is it that Trudeau now calls this "gender-based violence?" That term erases the victims. It's called violence against women and girls. We don't talk about gender-based indiginous missing and murdered, so why are we erasing the women murdered 32 years ago? We can't address the problem unless we can clearly state that men victimize women because they are women.

@Anonymous 7:43 AM -- He has said that. PMJT is trying to be inclusive of trans and nonbinary people who are also victimized for their gender. A transgender person gave a speech at the memorial last night. To be inclusive is the same reason he talks about two-spirit people within the context of the MMIWG inquiry. Trans and nonbinary people weren't recognized as such in 1989, but that is changing. And one way those changes are reflected is gender-inclusive language.

Remember he has also said correctly that feminism also benefits men, by breaking the boundaries of a strict adherence to gendered norms. Which is exactly why those women were attacked: the shooter was vindictive and jealous that they were in an engineering program he believed he was entitled to. Trudeau was the first G7 leader to call out Gamergate (before he even was elected), a misogynistic attack upon women in STEM. Steve Bannon praised it as a breeding ground for Hitler Youth types he could radicalize for Trump. It mushroomed into the incel movement, which spawned the scumbag who plowed down a dozen women on the busy Yonge and Dundas thoroughfare, and which to this day holds up the Polytech murderer as a "martyr for the cause."

Perhaps the cons should ask themselves why they've gone out of the way to not make the connection between gun violence and macho psychology. It's because they are owned by the gun lobby, and their entire political ethos is a rigid ideology dating back to the '50s. 1850s that is. The Polytech victims represent progress. The cons represent a regressive mentality wanting to "take Canada back."

Another lovely tribute, Simon. Those fourteen beams of light never fail to move and inspire me to champion the rights of women and girls everywhere. It's still painful to imagine what these women went through at the hands of a madman. I can't help but think of the many student employees I've had under my supervision in the last 35 years and although many of the males were duds, I'm having a hard time trying to think of any duds among the females. Most were always willing to learn from their mistakes and always went above and beyond their duties. Perhaps it was because I always instilled in them the value of a good days work and praised them for it. Or maybe it's my unorthodox style of supervision that made them love their jobs. Actually, I believe they embraced their jobs and gave their best because I treated each and every one of them with the utmost respect. Always. It didn't cost anything and the rewards were priceless. I just wish more people would do that and help end violence against women, permanently.
JD

Ban all but double barrel shotguns and single shot rifles

Hi anon@7:43AM….Using the term “gender based violence” doesn’t erase anybody, on the contrary it’s more inclusive. Please read Jackie’s comment below to further educate yourself. Thanks….

Important to refer to these as "femicides" since they exclusively targeted women.
Also important that they rest in power, no woman should be attacked simply for furthering her own life.
And not to put too much of a political spin on this, but Michael Taube (Harper goon) was on local radio saying the Conservatives would never run women over men because it was "demeaning to women"; referring to Del Duca running a slate of women candidates in the upcoming election.

I remember that day in 1989 because I was, as always, the only man in a room of women translators-to-be...and we all cried, we all screamed. Algonquin College in Ottawa was on lockdown. It affected us all and thank you, Simon, for giving this some much-needed light.

Hi salamander….Thanks, I’m glad you liked the post. I have been a bit under the weather (exhaustion) so I wasn’t happy with the way things turned out. I should have included a line about the expanding circle of sorrow that caused many of those who knew and loved the murdered women to take their own lives. Also I should have had more to say about how the Harper Cons tried to erase their legacy by killing the gun registry. But I guess there’s always next year, for I will NEVEr stop writing about that terrible tragedy…

Hi Jackie….Thanks for educating anon@7:43AM. I am so tired of people, including some who call themselves feminists, picking on trans people. It’s obscene. But I thought you did a brilliant job of explaining things, and why feminism is good for women and men. As you and I have discussed before misogyny is the monstrous elephant in the room, Trumo used it to devastating effect against Hillary Clinton, and it’s also responsible for much of the deranged hatred aimed at Justin Trudeau. I have to admit I thought we would be beyond that by now. But for as long as it takes, the battle will continue, and hopefully the new generation will help us bury misogyny once and for all…

Hi JD…Thank you, as I told Salamander, I was so tired when I wrote it I felt I had left some things out. But now I’m feeling better, because something is better than nothing. I was impressed by your story, because I was also moved by how hard women had to work to get to the place many men got to with half the effort. Also my education was a slow one, since I was raised in all male institutions, so I didn’t properly realize how hurtful misogyny is. Which is why when I learned what had happened during the Montreal Massacre, I was so horrified, and have since worked hard to advance the cause of female equality. As I told Jackie, I had hoped that such a mindless prejudice would have been banished by now. But when I read some of the comments on the internet on December 6th, I was sickened, and realized that we still have a long way to go….

Hi Steve…. My views on guns were also shaped by a horrible massacre that took place in 1996, at a primary school in Dunblane
, Scotland. A deranged gunman killed sixteen young children and a teacher, and wounded many others, before shooting himself. It was a brutal act of senseless violence, but at least it drove the British government to severely regulate guns, and the UK is now a much softer place that it once was. And I would like the same level of regulation here…