Justin Trudeau and the Countdown to the Election 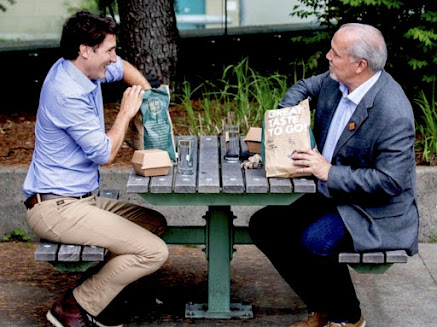 It was great to get back to Canada, and see Justin Trudeau having a White Spot lunch with his NDP friend John Horgan.

And looking so good on the eve of an almost certain late summer or early fall election.

While Erin O'Toole and his grubby Cons are looking like death warmed up. 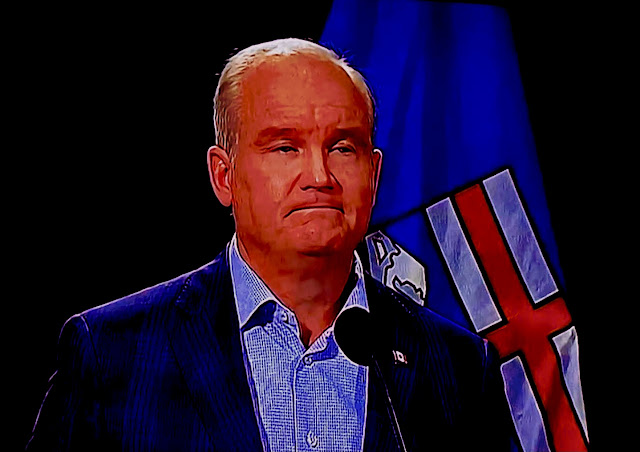 But then who can blame poor old O’Toole?

That photo was taken at a newser in Calgary last  week, that only TWO reporters bothered to attend.

And who can blame THEM?

When the latest polls have the Trudeau Liberals on the knife edge of a majority.

And O'Toole has never looked more like a loser... 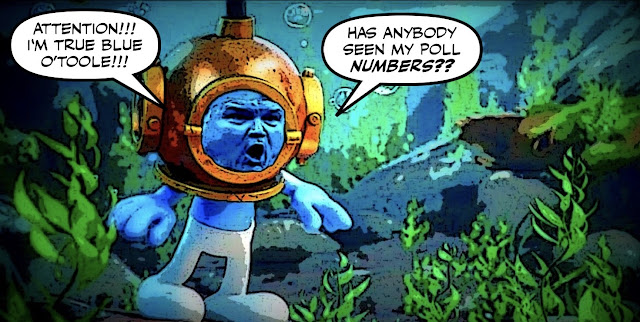 But if that's pathetic, this is unbelievable.

John Ivison, sounding like a cross between Churchill and a Con cheerleader, straining to make us believe that the loser O'Toole could be a winner.

Three recent opinion surveys put the governing party between 12 and 14 points ahead.

But the sense I am left with is that this is not a party in panic mode. Rather, it is one that believes it can give Justin Trudeau a bloody nose if he calls an election for which there is little justification, other than favourable polling numbers.

But sadly for him, not quite making it.

A gloom has set in with some Conservative operatives, particularly in Ontario, who think things are going to get worse and the party might lose 40 seats in a fall election.

Just like his fellow Con fluffer Andrew Coyne, who has also been trying to pump up O'Toole's sagging balloon by claiming that Trudeau's high polling numbers could be dangerous...for the LIBERALS.

Only to also be forced to deal with reality:

If  the latest polls were to be reflected in the results on election night, the Tories would turn in the worst showing for a united Conservative party since – well, possibly ever.

Leaving both Ivison and Coyne looking like Con stooges fiddling away on a sinking ship. 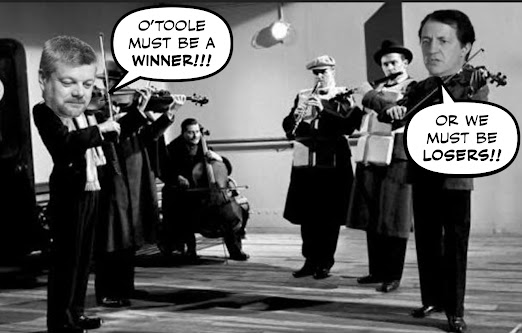 The situation would be hilarious, just another ghastly Con clown show, if it wasn't so dangerous.

For it shows how far the Cons, with their bought media and foreign advisers, are prepared to go to distort reality. And it should be a warning of what they might do during an election campaign. 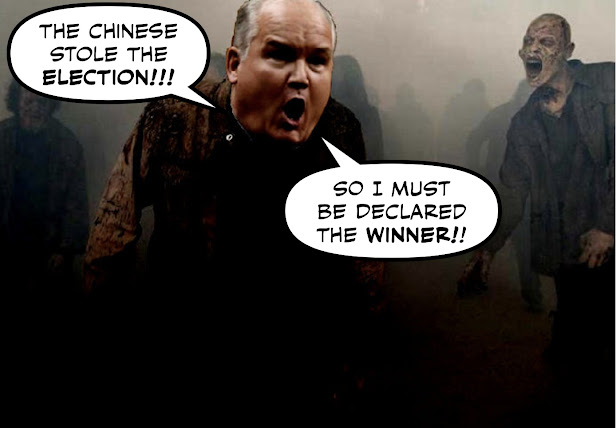 For they are now so desperate that there are stories going around that have O'Toole stepping down, to allow Stephen Harper to become the Con's interim leader.

I find that hard to believe, Harper was always more of a coward than a glutton for punishment.

But the stakes are enormous, the Cons are still the Cult of Harper, and some of them believe that they could be reduced to the status of a third party, so anything is possible.

Justin Trudeau has the wind in his sails, so I think David Coletto is right... 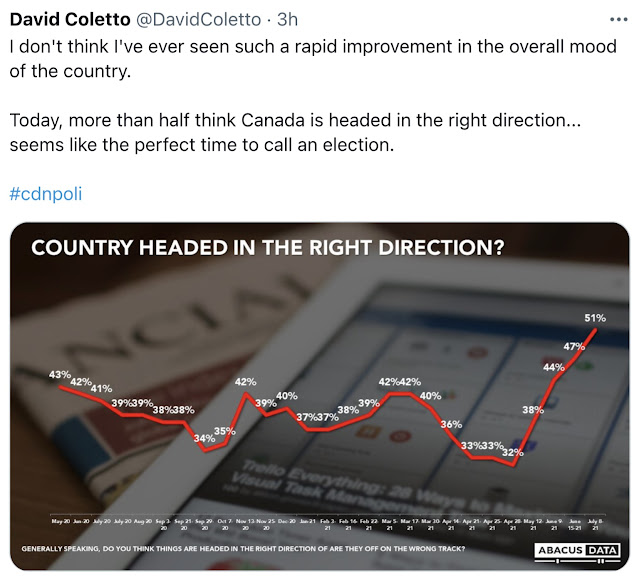 It does seem like the perfect time to call an election. 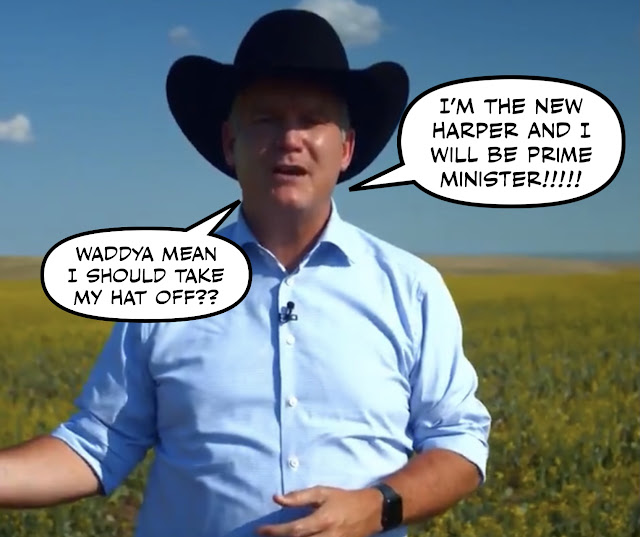 It's time to put Erin O'Toole out of his misery.

Time to end that wretched farce.

And bury the Harper Party once and for all...

Erin O'Toole is campaigning in Alberta and Justin Trudeau was doing the same thing last week.

That is the only thing we need to see at this point to discern the current state of affairs in Canadian federal politics.

Politics being what it is things can change but right now I believe the Conservatives have cause to be concerned.


Related to my earlier post. Here is a link for anyone interested in following up on Jason's boy John Carpay:

Hey Simon, since today's fuddle-duddle fracas on the Hill involved the subject of "databases," what's going on with your blog template? The header graphic is massive and eats up half the page, and the pictures are all distorted. And yours isn't even a custom template, it's one of Google's own, so I'm wondering what's up?

I use Blogger too, but have found it lacking. I've dabbled with WordPress in the past, but found it too complicated. Do you think you'll stick with Blogger and see if there's something you can fix on the back-end, or go with another platform? What do you think of Tumblr? Although I guess anything's better than Rumble, Gab, or Tankie Tik Tok...

What's with the wingnut love of losers? The GQP still adores their twice-impeached, one-term loser who couldn't beat a guy they insist is senile. And our own Cons want to bring back their loser who handed a majority to a guy they said wasn't ready. Hey, if the Cons want to replace O'Toole with Harper, I say bring it on!

Hi Ottlib….I greatly enjoyed Trudeau’s visit to Alberta, and his more aggressive approach to Kenney. I don’t know if it will result in one more Liberal seat, but seeing the usually aggressive Kenney deflating like a balloon is a sight for sore eyes. You’re right, we can’t take anything for granted, But the trend lines are very encouraging, the Cons are showing signs of starting to fight themselves, Bernier’s hideous party is showing some signs of coming alive. And some are even speculating that Kenney could be the next Con leader. I don’t know what I’ve done to deserve this but I am truly grateful…🥳

Hi BX…l know John Carpay to be a vicious homophobe, and a SoCon stalwart. And I’m not surprised that he is acting like a fascist. In the U.S. a number of reports have shown the religious right to be a growing force in the post Trump Republican Party so they are bound to feel that they can do the same thing here. Needless to say I’m praying for them to succeed, for it would be the final stake through the heart of the Con movement. ☠️

hi BX….I had forgotten that Kenney has compared Carpay to Rosa Parks. Thanks for reminding me, it’s so obscene and so Kenney…

Hi Jackie…Sorry for scaring you. I thought I might change the look of the top of the blog. And I had or thought I had the ideal picture, only to find out I didn’t. So I thought I might put in another pic from the Quebec student revolt, only to have it take up half my blog. I was so tired at the time so I thought it might do until I could find something better. That worked until Seb took a look at it and was horrified. So it was back to square one. I won’t be doing that for a while…..🙄

Hi Unknown…I can only assume that it’s some kind of messianic complex. Trump and Harper created their respective parties with the help of assorted religious fanatics, and those fanatics are loyal to the end. Anyone who has followed my blogging adventures knows that I have always considered the religious right to be the hidden hand behind the Cons. They have helped elect Scheer, Kenney, Ford and O’Toole and it’s time Canadians woke up and did something about this threat to our country and its values…

Harper was the worst PM in history and recent history and when you compare him to BM the PM he is still worse and that is shocking.

I am quite happy for you liberal partisans... the truth is, that the internet comments are showing a completely different picture than the polls are...so idk. But anyway, I guess you are right?🤔

This is fucking abuse of the office and so transparent on the eve of an election. I knew Barrett would go complaining to Dion. LPC have been using this company for years and they contract with the Democrats too! I am so fucking angry I could spit. I want to throw things right now!

Dion is an incompetent, anal-retentive asshole who needs to be fired. And for that matter so does Barrett. And Robert goddamn Fife. This isn't fair. This isn't fucking fair. The Cons and even Dippers use the same fucking arrangement. But only Trudeau gets investigated? What a banana republic! The ethics committee itself is corrupt!

Dion said Trudeau has 30 days to respond [to Barrett's letter]. Dion will then decide whether to launch a formal inquiry.

Which puts us right smack at the point when an election call is expected. Goddamn it. And the fucking useless Dippers are determined to have another 2006 on their hands so that Canadians won't have childcare. Beatings will continue until morale improves (or the Liberals are destroyed in revenge). Fuck them. Fuck them all.