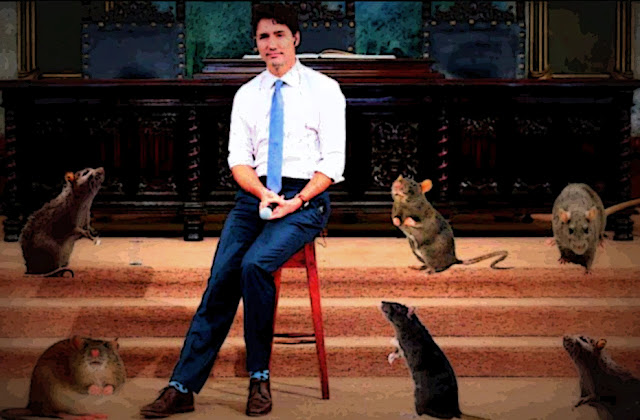 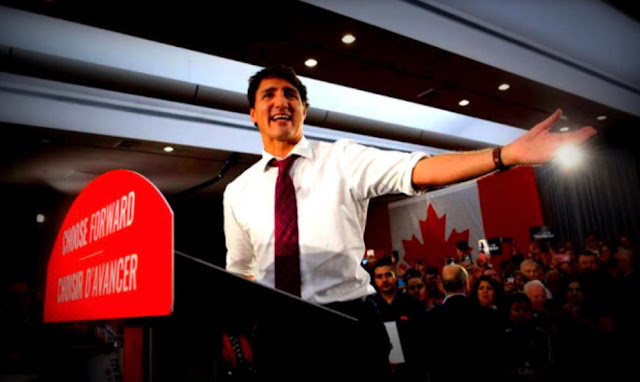 After Trudeau was cleared by the Ethics Commissioner.

Ethics Commissioner Mario Dion has ruled that Prime Minister Justin Trudeau did not breach the Conflict of Interest Act in relation to his involvement in granting WE Charity a federal contract, but former finance minister Bill Morneau placed himself in a conflict of interest “on several occasions.”

Responding to Dion’s findings in a statement, Trudeau said the report “confirms what I have been saying from the beginning.”


“At the heart of this initiative was getting support for youth during this pandemic as fast as possible. … My job as Prime Minister is to do whatever it takes for as long as it takes by providing direct support to people and businesses to get through this. That’s what our government has done,” he said.


The decent Bill Morneau did get tagged by the Commissioner for the "crime" of being friends with one of the Kielburger brothers.


But the damage to the Liberal government was nothing compared to the damage the Cons inflicted upon themselves.

Andrew Scheer was so frustrated at being unable to frame Trudeau that he practically lost his marbles.

Today, Justin Trudeau used the COVID-19 pandemic to justify his corruption. That is disgusting. pic.twitter.com/chsDjOKgJ9

And had to resign as leader before he was carried away in a straitjacket.

As for Pierre Poilievre, he was also embarrassed when he tried to take on Trudeau, 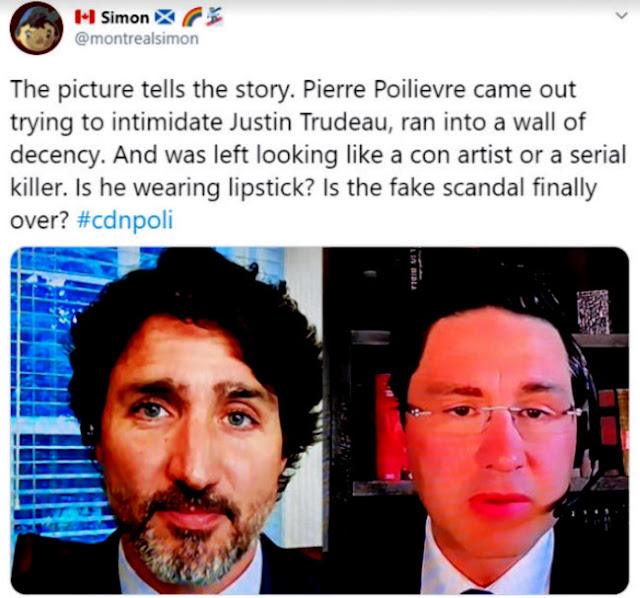 And is now so much less than he once was. A certified loser if ever there was one. 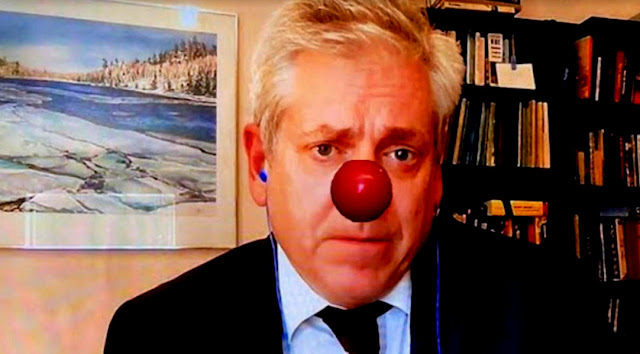 Who went after Margaret and Sophie Trudeau as only he could.

While his hapless leader Jagmeet Singh got so carried away by the fake scandal, he killed thousands of jobs young Canadians were hoping for, and then tried to blame Trudeau.

But when friends of the PM need help, he jumps to give them a nearly billion dollar bailout

The PM needs to admit that giving money to WE was never about help for students, but about help for his well-connected friends pic.twitter.com/q9cnvuxBGi

But will no doubt soon be exposed as a poseur who only cares about himself.

And lastly, but definitely not leastly, some of the biggest losers of the fake WEgate scandal were the members of our shabby Con media... 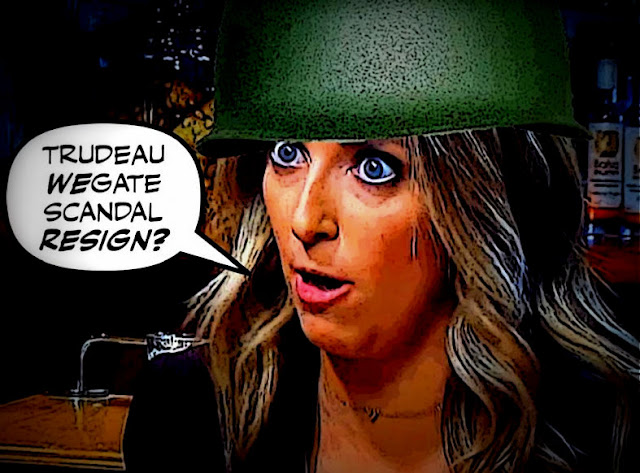 Who disgraced themselves day after day, week after week, month after month trying to bring down Justin Trudeau, in what can only be described as a feeding frenzy.

The media's overwhelming and systematic Con bias, destroyed the little credibility they had left.

And to make matters worse, despite making such a sordid spectacle out of themselves, not one of those grubby Con stooges has yet had the decency to apologize.

As one might expect from the followers of this sad loser... 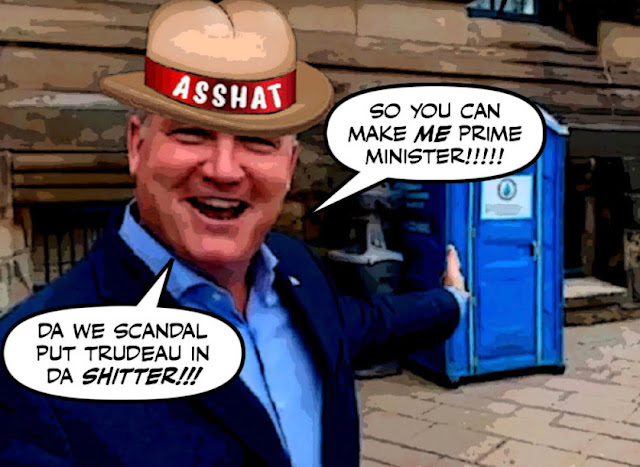 Who is about to lead his party to yet another defeat in the next election.

About to be humiliated by a leader with more decency and class than all the grubby Cons put together... 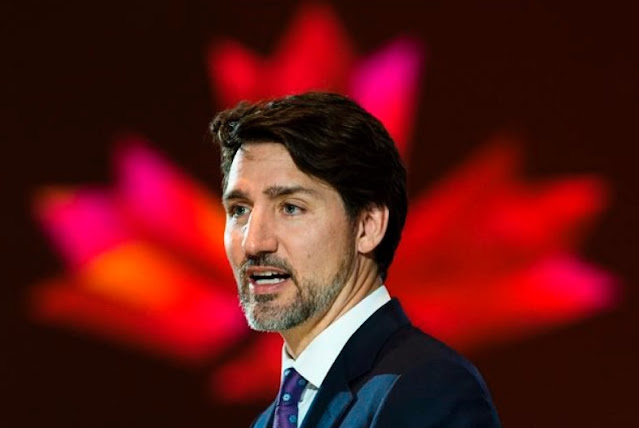 And who after all he has had to endure, and for his service to Canada.

Could be about to win his biggest majority ever.

Hey toxic Trudeau haters, how about that fake WeGate scandal?

I hope you enjoyed it as much as I did...

I wrote about it a lot, and identified a shit ton of QAnon discourse happening in the social media underbelly. The crux of this from where I see it (besides Brown's perverse vendetta aided and abetted by Conman Black) was that Scheer wanted to go out with a bang aiming a "scandal" at Trudeau's "access to youth" (his own words on P&P).

If you go back to the election, he and Wornout were the ones who floated that vile, bogus Lolita conspiracy theory about Trudeau's teaching career. When COVID hit there was a flurry of Q nonsense surrounding Sophie's quarantine, that originated with Fife's garbage retweet of a Murdoch gossip rag, the headline of which had a framing that insinuated a "coziness" with Idris Elba at WE Day. A hashtag Typhoid Sophie followed soon afterward.

Later in the summer, it was just as WeGhazi hit peak that a QAnon adherent plowed into Rideau Cottage with an arsenal in his pickup truck and nobody said boo. Soon after, Catherine McKenna's office was bombarded by another Q nutter yelling into her intercom about the Liberals being a cult funnelling money to pedophiles through WE Charity. Wornout has written previously that he believes the LPC are a "cult" and there's been Q traffic for awhile now attempting to connect Trudeau to NXIVM through the Bronfman family. Bizarrely, this whole thing followed the same pattern as SNC and even had a public servant named Wernick testifying: a phony "corruption" scandal the M$M latches onto, as a distraction from the far worse scandal of Cons fomenting hate. They knew what they were doing but the M$M ignores social while it radicalizes the Con base.

Skippy kept it going even worse throughout while the leadership bid was going on, pushing anti-Semitic trash about George Soros, the "great reset" and Katie Telford's husband. It's my understanding that the Kielburgers went to a Toronto-area Catholic school but have a "Jewish-sounding" name. They too were targeted with anti-Semitic garbage, and Mark Bourrie wrote about the death threats that were sent even to their kids.

Same thing with the owners of Speaker's Spotlight. The poor old lady testified that she was terrified to even answer the phone and hadn't slept well, after Bergen posted their number to FB and they got inundated with hate. And then the vomit-inducing flood of vitriol aimed at poor Margaret Trudeau, for which Charlie Anus was the primary catalyst. This whole fracas was a QAnon trial run in Canada from day 1. The NDP have no right to call themselves the conscience of parliament when they're just another shade of Trump orange.

The key to understanding GQP North comms is that they separate the really seedy stuff for their online audiences, from the "official" narrative for the M$M, which is favoritism and "corruption": the ghosts of Adscams past. They caught lightning in a bottle with Sponsorgate and they haven't been able to repeat that perfect storm since. They tried with SNC but failed. The Internet is giving them an additional platform to gain traction with even more bizarre conspiracy-addled "scandal" mongering. I'm glad Guilbeault is trying his damnedest to fix it, despite Con disinfo and narcissistic academic grandstanders aiming to be the next Jordan Peterson.

WeGhazi was a shot across the bow and was especially stupid as scandals go. But judging by the reaction, this shit needs to be reined in or the next manure bomb is going to be worse.

For unknown reasons. it seems they rushed the CSSG into conception and operation without having completed an effective time appreciation. Because we remain unaware of the communications that took place between all of the offices involved in this dog's breakfast, we'll never know to what extent the WE Charity had a hand in developing the job specifications and terms of reference for the programme, which could have either disqualified or discouraged the participation of other bidders. The involvement of Trudeau's family members with the charity was coincidental. The case should have been referred for investigation to the Commissioner of Fuddle-Duddle.

We gate, and the SNC gate and the blackface gate and on it goes, with the thankful understanding of the Canadian public that they should not dig into those things because they are manufactured in the bowels of cons.

We gate was a 2 for 1 deal designed to take down Trudeau as well as eliminate competition from the We charity that was all about empowering youth as opposed to the conformist goals of evangelical charities. Seems that even progressive traditionalists like Charlie could not fathom how modern fund raising and youthful empowerment could be anything other than scandalous. Preserve the past, get them indoctrinated before they develop a mind of their own, its the way of the Con. Thanks for the help Charlie!

Just like every other fishing expedition the Cons and ConDpers go on they just couldn't land the big one. Meanwhile, innocent people were victimized by these assholes and they chased a children's charity out of the country. What will they do for an encore? Kick bunnies? And how do they sleep at night? They don't. Scum, just like rust, never sleeps.
JD

Hi Jackie...I am so impressed by the way you manage to keep tabs on the Cons and their sewer politics. You do us all a service. Canadians need to know how low the Cons have fallen, and the damage the Harperite cult has done to this country. For the more they understand that the more they will be repelled, and the more the Cons will be marginalized. Thanks to the Harperites we have had to slog through a sewer for years, but we have never been closer to defeating them, and they have never been closer to falling apart. The future is bright and it does belong to us...

Hi John....The whole thing was rushed, and some corners were cut, but there was never any criminal intent. And what annoyed me the most was the way the Cons with the help of the media tried to make it sound like the worst scandal in the history of Canada. The idea was to provide a quick source of jobs to a lot of young people. But the Cons and their bought media turned it into a political circus, and the young people were screwed and forgotten....

Well judging by Twitter and other social media comments, the liberals are clearly going down...do either these comments are not representative of the broader public, or the polls are massively wrong ...

Hi Steve....I think you’re right. Canadians are tired of the Con scandal machine. That’s all the Cons ever do, smear,smear,smear. It’s disgusting and it’s not the way Canadians should behave...

Hi RT.....Good point. Lost in the circus was the fact that the Cons have always hated the WE organization because of ihe progressive sharing values it promoted. Those values were a bit too goody goody and corporate for a ruffian like me, but they were infinitely better and more Canadian than anything the Cons ever stood for. But of course, the Cons know that as long as our Canadian values are still worth something they will never dominate this country again like they did during the Harper years...

Hi unknown....Thanks for those polling numbers. I definitely plan to use them in my next post. The Cons won’t like them but we must spread the good news....😉

An intersting bit this morning ( paywalled so I only got the lead ). Reformatories now say that Harper and O'toole had a guy investigate and exonnerate Vance before promoting him. The guy says he didn't do it. Somebody is telling porkies.

Either way its good news for the libs. They were either told an investigation cleared Vance or they were told nothing and the allegations were covered up by Error Old,Fool.