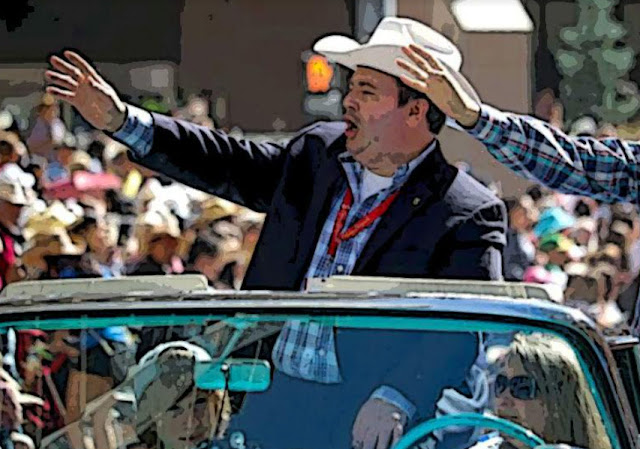 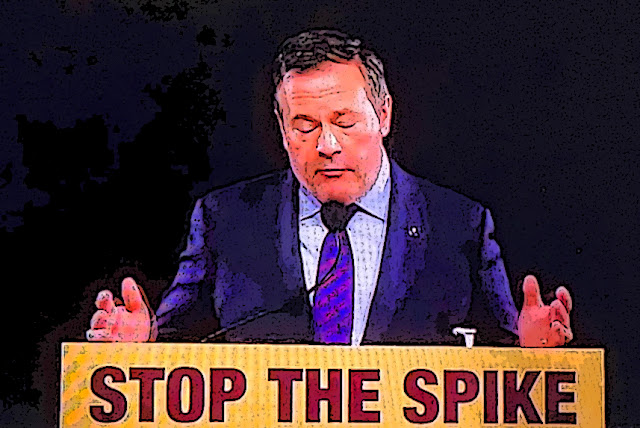 Now he looks like a dead man walking, and his criminal incompetence is destroying Albertans.

The province is currently battling the worst coronavirus outbreak in North America: this week, Alberta had an active case rate of 534 per 100,000 – more than double the country’s average, and one of the worst in the world.

Now many of his rednecks are hating him, and hating themselves for being so damn dumb.

And as for their chunky Messiah, he's now impaled, or spiked, on his own petard.

Premier Jason Kenney says he is making it clear to his caucus that extremists are not the United Conservative Party's base, after receiving death threats from members of that group.

In a Facebook livestream on Tuesday, shortly after introducing new public health restrictions, Kenney said after a recent news conference he received two messages in short succession, one of which threatened his 83-year-old mother who lives alone.

He built his political career with the help of, religious fanatics, misogynists, racists, homophobes, and all kinds of other scummy Con kooks. 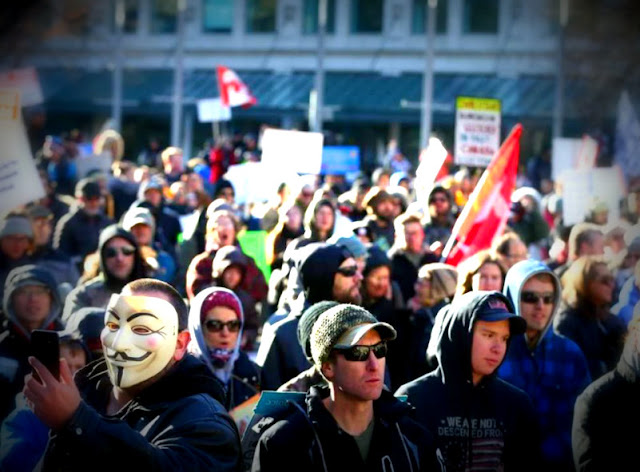 He whipped them into a frenzy of toxic Trudeau hate... 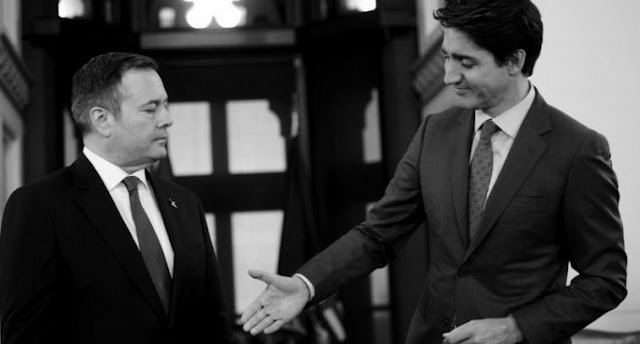 By posing absurdly as a tough guy.

But now those kooks are coming after him. 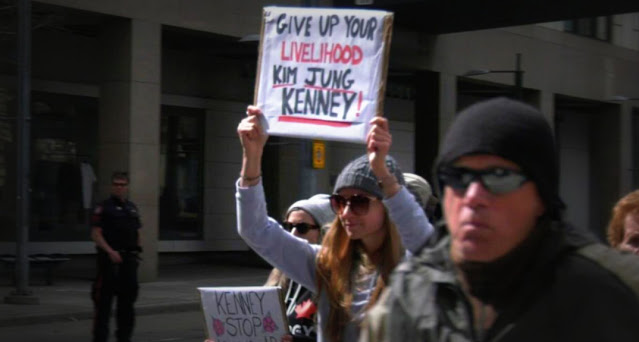 And he can't accept the help the classy Trudeau has offered him.

I spoke on the phone with Premier @JKenney today, and offered the federal government’s support to the province as they respond to an increase in COVID-19 cases. We’ll continue to work together to keep people safe and quickly deliver vaccines. More here: https://t.co/DhkEqvgmLT

Lest he look even more pathetic, and enrage his Covidiot base further.

So Kenney's wounded pride could result in the deaths of even more Albertans. 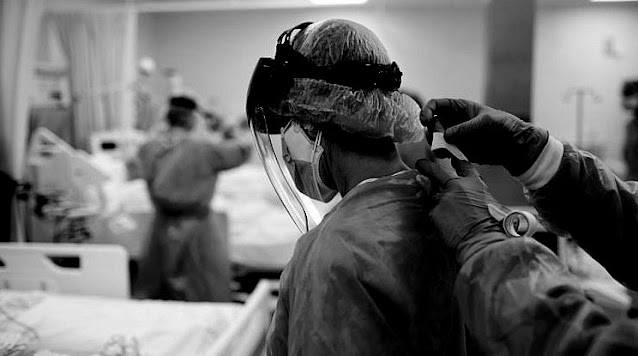 And contribute to the collapse of the province's exhausted frontline workers.

You know whenever I see this photo I can't help feeling that Trudeau is wishing he could punch Kenney in the face. 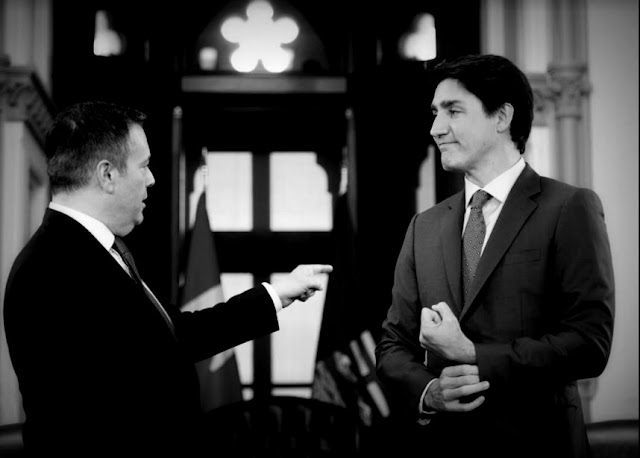 But of course our prime minister is too decent to do that. Pity.

So it will be up to the people of his backward province to get rid of him.

And send him back to the hellish place he came from.

Before that monstrous Con can hurt even more people.... 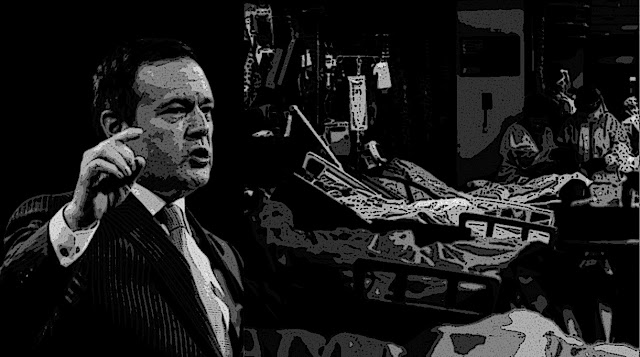 Each of the so-called Resistance (is Futile) premiers did everything expected by their base and it didn't work. Surprisingly, CoVID wasn't stopped by macho posturing of phony tough guys, angry morons screaming about their Freedom/Freedumb or impressed by Austrian Libertarian economic theory.

"Premier Jason Kenney says he is making it clear to his caucus that extremists are not the United Conservative Party's base, after receiving death threats from members of that group."

It's unfortunate that his mother is getting threats but let's not forget who's been working these assholes into a froth for so many years. And yes Jason, they ARE your base. The same base you were okay with when they were threatening JT and his family except you were oddly silent about that. You reap what you sow asshole and I hope you and your fellow populist, Trumpian wannabe premiers reap the same shit they've been flinging at JT all these years.
It's a classic tale of what goes round, comes round, with a heaping helping of Karma and it couldn't have happened to a more deserving turd.
JD

Kenney is unfortunately and growing up in Oakville makes me wonder, why doe only his mama love him?

Hi Dan,,,,,History will record that the Con premiers put the ignorant and bigoted views of their ugly base before the lives of the old and the vulnerable. And for that they must never be forgiven. I consider it a crime against humanity and I will fight those bastards until the day I die...

Hi JD....It is a classic tale of what goes around comes around. Kenney pandered to the worst and most bigoted Canadians to make himself premier, and now thanks to the deaths of so many innocent people he has been forced to take action and alienate that base. If it wasn’t so tragic I could really enjoy Kennedy’s day of reckoning. I’m not religious but I pray that Kenney ends up behind bars one day...

Hi Steve....Kenney has a lot of rednecks bigots and religious who still worship him, but as far as I know the only person he loves is his mother. In addition to everything else he’s an utterly pathetic human being...

Alberta once again proving itself the breeding swamp of the Canadian fascist movement. It's unfortunate that Kenney's mother is getting threats, but her son is the one who whipped up these fanatics, and now is reaping what he's sown. If he really cared about her or had any integrity whatsoever, he would resign and move back into Mama Bates' basement where he belongs. So he's revealing himself as a disgraceful coward who'd sacrifice his own mother to stay in power. What else is new, he's a Con. A GQP deplorable if there ever was one.

Moreover, I have yet to see any Con whatsoever come out and denounce their own party's filthy smear campaign against Maggie Trudeau. Why should Kenney receive any sympathy for his own actions, while his ilk in Ottawa and their fed-NDP lackeys continue getting a free pass for framing her as a grifting fame whore with zero accomplishments besides riding the coattails of her husband and son's last name?

Trudeau has shown incredible restraint in dealing with this dangerously incompetent pyromaniac and the insane QMorons he's "cult"ivated. Although if anyone belongs in "restraint," it's Kenney himself, and the rest of his pack of cosplay cowboys way out West. Yee-haw, pardner! Got them spurs on their jackboots, ready for a showdown at the Not OK Corral. Mamas, don't let your babies grow up to be drillbillies. Kenney and his depraved base of mouthbreathing Mavericks should really just ride off into the sunset and never come back.

Can't agree more with your J K's assertion! The insufferable smarmy politician was able to deceive so many here in AB it's frightening, but the pendulum is dragging him back to his true self, a subservient harpo sycophant and an pathetic person. Love this piece and always savour with much gusto Jackie's take on things.