Justin Trudeau and the Long Road To A New Majority 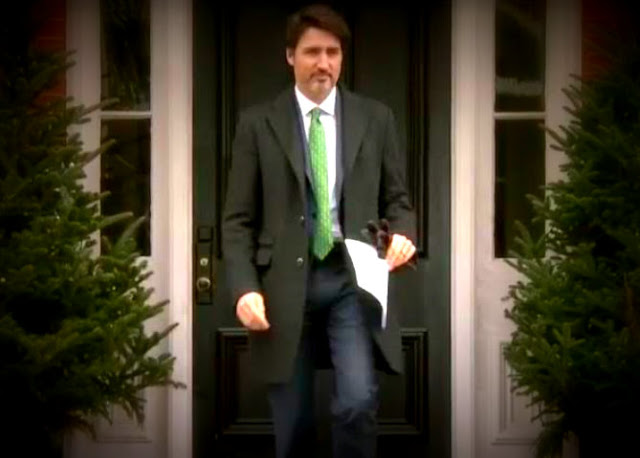 Since early March Justin Trudeau has been stepping out of his residence every morning to brief Canadians on the Covid-19 crisis.

And what his government is doing to try to help Canadians.

So I'm glad to see that after leading us to a very good place.... 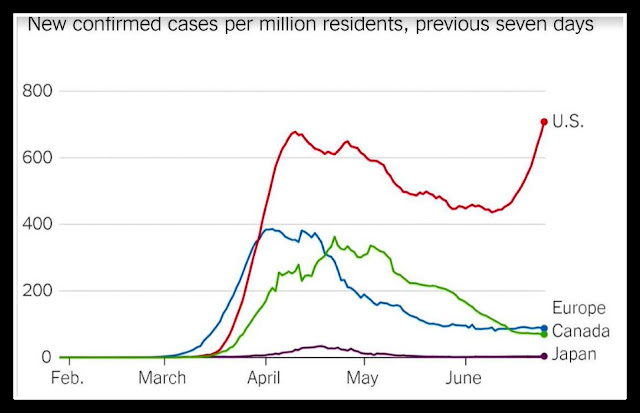 Trudeau will be taking a bit of a break. 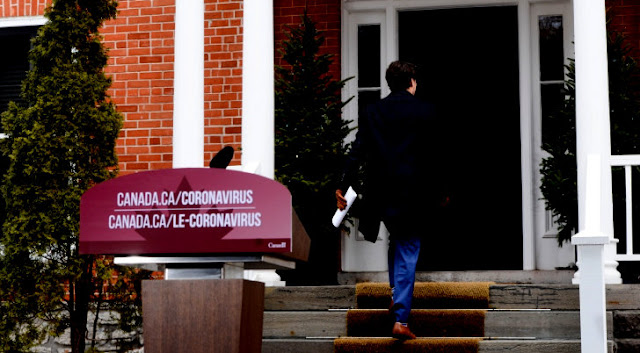 And ending his daily briefings.

Prime Minister Justin Trudeau announced Monday he would begin scaling back his daily press briefings, which have provided updates on the novel coronavirus since March 13. Instead, he said he will provide news updates a few times a week as the country moves to reopen.

For nobody deserves a break more than he does.

So you might think that even the Cons would would give him some credit for a job well done. You know, from Canadian to Canadian eh?

But if you did think that, you'd be wrong. For the Cons are no longer a truly Canadian  party. And this is how the grubby Pierre Poilievre reacted:

By mocking our decent prime minister as only a loser like Skippy could... 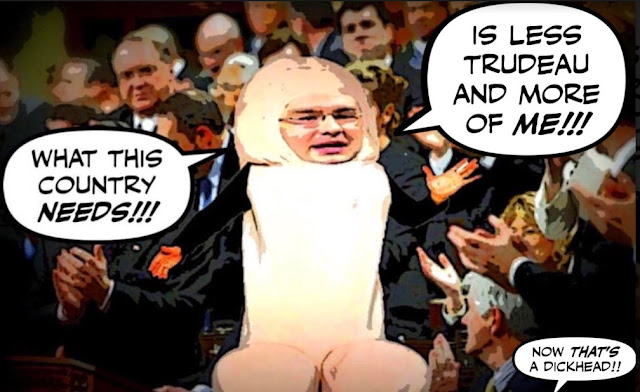 While continuing to pump up his already bloated pension.

As for the equally grubby Andrew Scheer, he's keeping busy accusing Trudeau of not being Canadian enough.

First Trudeau says he doesn’t think Canada is the best country in the world. Now the Liberal media is issuing trigger warnings for the 🇨🇦. I will wave the 🇨🇦 proudly and celebrate the hope and opportunity our great country means to people fleeing violence and discrimination. pic.twitter.com/Snv6Rq4ADu
— Andrew Scheer (@AndrewScheer) June 28, 2020 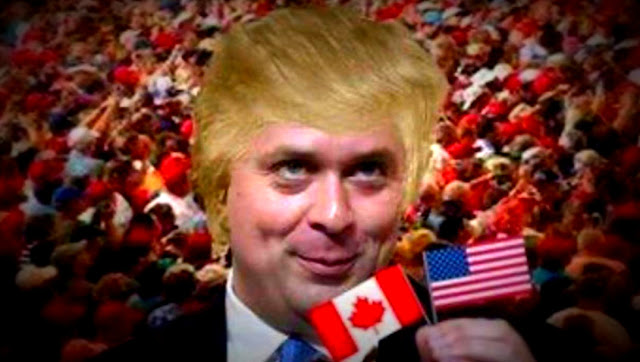 The Ugly American accusing Trudeau of not being Canadian enough?

I mean that's so outrageous, I was forced to reply in kind on Twitter...

But of course, the real reason the Cons are behaving so badly, is because they are desperate.

For when Leger and Mainstreet agree they must surely know that the writing is on the wall.... 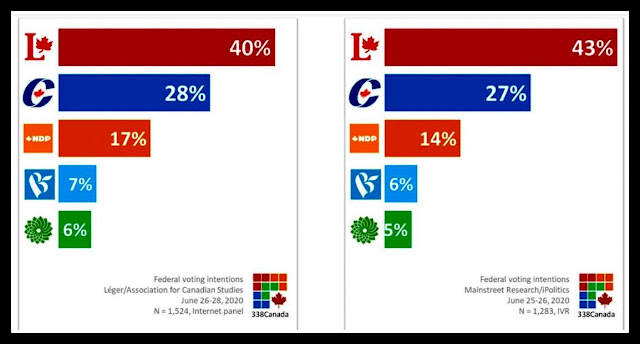 And when the NDP is either really low, or collapsing, so it can't split the vote. 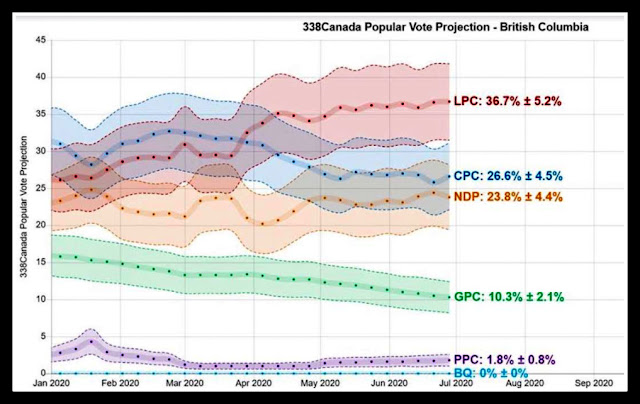 The Cons must also know that it won't be too long before Trudeau calls an election, and goes for another crushing majority.

Yup, the universe is indeed unfolding just as I always said it would.


Happy Canada Day everybody!!!
Posted by Simon at 8:57 PM

Happy Canada Day to you too, Simon. If you'll permit me a shameless plug, a short while back you had mentioned in a comment reply that a Twitter follower of yours asked if I had a blog of my own. I do now (though I don't have Twitter), and I wrote an essay about what Canada and Canada Day means to me as an American, before and especially during the age of Trump. Which includes a slam on Petey Mac and the Fool's latest culture war tantrum about the flag, and how completely tone-deaf it is particularly as Colin Kaepernick is being vindicated.

I don't know why we keep fucking up so badly as a country, but I will say that the world really does need more Canada, and I wish we could smarten up and learn from the best right in our own backyard.
I'm not sure Canadians are aware of just how significant it has been during this time for us to have Justin Trudeau to look to as an example for what leadership should look like (and not just in the telegenic sense), in the void left after Barack Obama's constitutionally-mandated departure. All those numpties saying that Canada is not "back," and that Trudeau has been a disaster on the world stage, because of hostile relations with thugocracies and a technicality outcome at the U.N. are full of it. The good thing is those polls prove that nobody really cared.

But speaking of those polls -- the best polls, yuge polls, terrific, beautiful polls, not fake-news lying crooked polls -- I don't know if there'll be an election up your way before or around the same time as ours, especially with that second wave and the new swine flu still being known unknowns. Whenever it happens, I'll definitely be rooting for Trudeau and his Liberals to get that strong mandate back, and for team Canada to continue to do well post-pandemic. Keep on keeping on Simon, thanks for the vote of encouragement, and have a very happy and Covid-free rest of your summer and hopefully, the year.

Death of a Con Man.

The lies of the right may be slaughtered by Covid forever.


There are two big differences between Canada and the United States: We are not Americans and we have medicare:

Those two big identity differences — our not-Americanism and our medicare program — are not just figments of our imaginative pride anymore. It’s a good thing that Canadians are too polite to be smug.
Canada, the United Kingdom, France, Germany, Italy and Japan are all in the nearly-there club, with chart curves that look comfortably similar, rising up to late April or early May, then declining. Only the United States is in the red category on this site, its numbers still on a sharp ascent as of the end of June.
COVID-19, in short, is punching a big hole in U.S. claims to superiority with its allies and Americans themselves are noticing.
One former health-care executive in the United States has been getting a lot of attention in this country lately because of a mea culpa he posted on Twitter. Wendell Potter, who used to work with the Cigna health-insurance firm, said he was sorry for all the lies he used to tell about Canada’s health-care system and pointed to the COVID-19 response in our two countries as proof of which one was better.
Potter’s Twitter thread confessed that big money was spent in his business “to push the idea that Canada’s single-payer system was awful & the U.S. system much better.” Now, however, he said it’s clear “it was a lie & the nations’ COVID responses prove it.”

Simon, I'm worried again. Fife is trying to manufacture another fake SNC fiasco with this WE Day bullshit, and some armed maniac just rammed his pickup through the gates of Rideau Hall. The Q cultists are going berserk as Epstein's girlfriend was just arrested and Trump is faring poorly in the polls. There were a bunch of QAnonsense protesters on Parliament Hill yesterday for their own Canada Day covid gathering, and the Proud groups, yellow vests, and other right-wing cesspools are bizarrely trying to conflate the WE organization with "child trafficking" and the SNC company in calling for JT to be arrested or killed. It's all bonkers and makes no sense but that's how these people think.

It wouldn't surprise me in the least if this guy was some "patriot" who acted on all these bullshit smears of Justin Trudeau as corrupt and a predator. When Fife gets a bone he doesn't let go of it even if there's no real meat. He's been after the WE organization ever since Sophie got sick and he started sniffing out trashy tabloids for salacious rumors about her and Idris Elba. Jesse Brown at Canadaland is a known exaggerator who seems to have an ideological bone to pick with WE Charities, because he's desperate for a scoop to boost his cred and because Dippers hate "private philanthropy."

They've really opened a can of worms here, in that the online comment boards about this story are full of filth attacking the Kielburger brothers themselves because they are Jewish. I hope Brown and Fife are proud of what they're doing to a kids' charity, to two Jewish brothers, and even to Sophie and Margaret too. This is really the lowest of the low. It's "Clinton Cash" and Pizzagate but with "Crooked Sophie" in lieu of Hillary Clinton. It's disgusting, but because it's the Trudeaus, they don't care. Fife wants another award and the taste of a Senate seat and everyone is going after JT.

Plus, as the Cons and even Trump get more and more desperate, I'm afraid Justin could suffer damage to a lot more than just his reputation. This is now three near-death experiences for the Trudeau family this year -- Sophie getting sick, Margaret narrowly escaping a house fire, now this attempt on JT's life -- and especially with all the targets on his back from Trump, Putin, the Cons themselves and their unhinged sycophants, and China, I'm worried Justin could get badly hurt.

I hope this WE Day bullshit goes away, Trump gets booted from office, and someone finds a way to put a damper on what the wingnuts are escalating. Forget that he's the prime minister. He's a husband and a son and a brother and a father of three. He's a human being. He doesn't deserve this. As far as I'm concerned, if anything should happen to him, blood will be on Trump's tiny hands and Fife's too. Shame on them all for what they're doing to such a good man.

Wanting to eliminate a social-democratic party that at least keeps the corporate Liberals honest is not progressive in the slightest. Simon, I'm very fond of you, but I'm deeply troubled by your rightward drift.

I don't even care whether he is a good man. One does not track people down at home and attempt to kill them. I remember the killing of Olaf Palme (whom I'd actually met) in peaceful Sweden.

In am troubled by this We thing. Why not put a billion dollars into Kimitikit
instead? (you know that youth program)
Has there ever been a big charity that was not found to be less than efficient.

I'm most worried (other than the actual attempt to kill innocent people at home, and thus also risk killing, their minor children, spouse and staff) by what this indicated about violent white supremacism among the military. I'm not much of a believer in "treason" as a charge against civilians, but military take oaths to defend their country, government and government figures. The State will have to upgrade their security for the PM, the Governor-General, their families and staff, and it is difficult to do that without making Rideau look like an armed camp instead of the pleasant place to jog and cycle along that it is nowadays.

I hope some relative intelligence comes out of the trial of the neo-fascist or whatever precisely the violent creep is.

Without the NDP intervention, there would have been no extension of the government's aid package, while many people continue to suffer. Requests for food and other aid have exploded in the poorer, multiracial neighbourhoods in northeastern Montréal. And of course there has been no renewal in the aid for pensioners, many of whom are in dire straits because grocery bills have exploded, among other expenses, and no supplementary earnings.