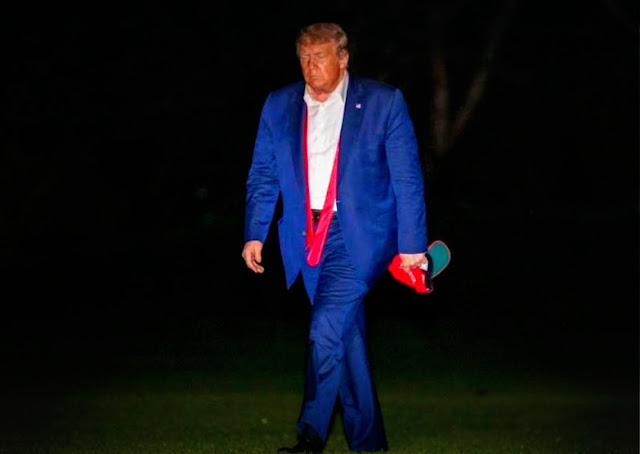 I feel like I've waited half my life to get a picture of Donald Trump as good as that one, for never have I seen him look so beaten.

It sums up what was one of Trump's worst weeks ever, and hopefully will be the one that will cost him the presidency.

As you probably know, the picture was taken when he returned from a rally in Tulsa, Oklahoma, that he had promised would be huge or YUUUUUUGE.

But sadly for him it turned out to be an almost total bust.

He must have been horribly humiliated, for if there's one thing Trump cares about it's seats. And I'm sure the Secret Service didn't enjoy the rally either.

And neither did health officials, after Trump tried to sabotage their war on Covid-19.

Only to see new coronavirus cases explode all over the United States.

The grim reality of the novel coronavirus continued to batter the United States this weekend, with a record 44,782 new cases reported on Saturday, the second day in a row that new cases have risen above 40,000 and the fifth consecutive day setting a single-day record for cases.

Which needless to say did nothing to improve his image as President Covid or Donnie Death... 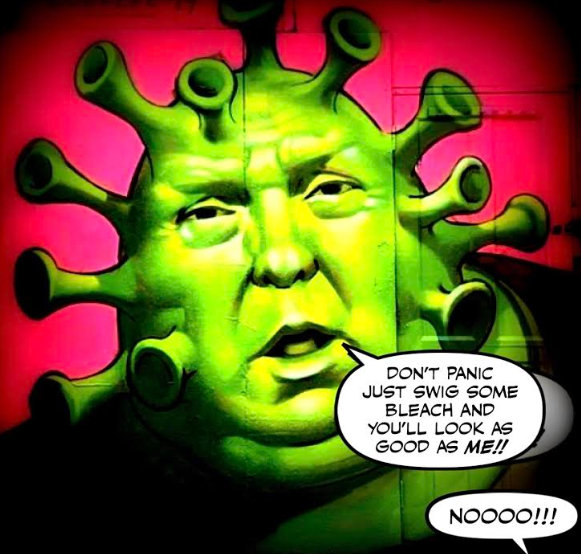 The monster who killed thousands of Americans with his abysmal ignorance and his unforgivable indifference.

Then Trump's Hell Week continued, when it was alleged that some of his Russian friends had been paying the Taliban to kill Americans.

A Russian military spy unit offered bounties to Taliban-linked militants to attack coalition forces in Afghanistan, including U.S. and British troops, in a striking escalation of the Kremlin’s hostility toward the United States, American intelligence has found.

And he did nothing about it.

Which had many accusing him of treason...

But of course, the biggest blow, the one that I'm sure hurt Trump the most, was this one.

Joseph R. Biden Jr. has taken a commanding lead over President Trump in the 2020 race, building a wide advantage among women and nonwhite voters and making deep inroads with some traditionally Republican-leaning groups that have shifted away from Mr. Trump following his ineffective response to the coronavirus pandemic...

For just like he knows empty seats, he also knows bad ratings, and now he's desperate.

And in his latest tweet he's clearly trying to set his own country on fire...


So he will not go gently into the night, but after his hellish week, the writing is on the wall... 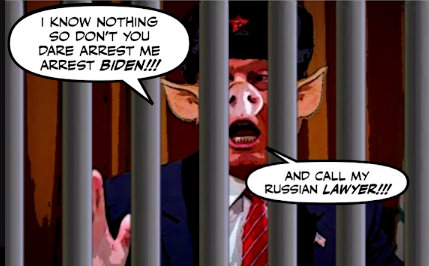 The Beast has been exposed.

He has shown the whole world who he really is.

And why he must be defeated in November.

Trump will be the first US president to have his presidential library in Moscow. BTW that bounty story fake news, just like all the russiagate nonsense.
It is the NYT or the National Inquirer?

Simon, Happy Pride Day in Toronto, despite the current restrictions. (As you know, ours is early in August, due to a desire to not interfere with National Indigenous Peoples' Day, La fête nationale and Canada Day).

Yes, that was a precious photo.

The Never Trumper Republicans must not be allowed to walk away from and disown the monster they have created. Trump just retweeted a "white power" video. He is not an aberration. He is the embodiment of American conservatism and the malign "Lost Cause" grievances the movement has been nurturing for 150 years.

The Gulag Oligarchs' Party, Goebbels' Own Propagandists, whatever you want to call the GOP. This is who they are. Trump is just one head of the beast. Firing him won't excise the carcinogenic rot that's decaying the body politic from within. It has to be only the beginning of Reconstruction 2.0. Otherwise we could end up with a more competent fascist in 2024.

The entire party is a corrupt racketeering organization and domestic terrorist hate group that needs to be disbanded and disallowed like its forebears in Germany. Germany doesn't honor (let alone worship) statues of Nazis, and in fact such veneration is prohibited by law.

They're not the party of Lincoln. Lincoln would be appalled at what they've become. They're the party of Agolf Twitler, the party that blames Lincoln for why Barack Obama was allowed to become president, and installed Cheeto Mussolini as revenge for a black man in the "White" House. They should never be allowed to deny that fact. They broke it, they bought it.

The ideological root of "Christian" racism comes from an Old Testament story about one of Noah's sons disobeying him, and being punished with exile to a faraway land (presumably Africa) and his children being "cursed" with dark skin. For their betrayal of the American people and basic human decency, I think the Republicans should have to wear the "Mark of Trump," with an orange stain permanently and strategically (!) encircled around the ring of their lying mouths.

And while we're on a track of taking down symbols, they shouldn't be allowed to claim the gentle and endangered elephant as their mascot anymore either. Their logo should be a closeup under a microscope of a cancer cell. Or a poison mushroom, or a Covfefid-19 spore with Hair Furor's ugly face. "What a terrible image!"

@ lagatta and happy Pride, Canada Day and all other celebrations to you as well! Unless the bastard cheats, there's a good chance this will be our last July 4th under the Trumpenreich. Polls don't vote of course, but everyone I talk to says they'll crawl over broken glass and land mines to give Trump a well-deserved pink slip this fall. Fingers crossed 🤞

Trump's miserable perp walk was indeed a photo for the ages, but I liked Adam Scotti's candid pic of PMJT and Hadrien having ice cream at the St Jean-Baptiste Day festival better. 🍦 ⚜ OMG he looks just like his dad! When did he get so big?

Happy Pride, I am an old white guy who grew up loving Jesus and hating everybody else because that is what my teachers told me about Jesus.

Today we live in a very equal society. Fairness, there is no fairness in life only money.

Trump is the guy who will push the button to avoid embarrassment. There is only one safe way forward. Or maybe a little downward.

The current chapter in the made for tv reality show "The Amoral Real Estate Developer Goes to Washington" does not seem to be going very well.The virtual spin machine has dismally failed to incorporate the unwanted Covid guest into a story line that benefits the hero. It should not have been a problem but with a narcissist in charge the producers had limited options. Unlike a Sleepy Joe or a Crooked Hillary that were cartoonized and mocked The Covid is an invisible killer with no human proxies although there were failed attempts to portray it as the Kung Flu or Pelosi Hoax. Just not the type of thrilling alternative reality stuff where the super hero knocks the despicable out of the universe or takes one for the team and bounces back stronger than ever.Instead time is moving on and The Covid is hanging on like Scheer's stinking albatross. Sure some people can be convinced that the Hoax is gone or that dying for the dollar is a patriotic duty but others are starting to worry that they have not actually seen the riches that were promised or the greatness it buys.Where is the great golden MAGA complex and why are the pheasants not clamoring to occupy the lower floors and basement? Are they still not desperate enough, does more have to be done?
The future is uncertain, perhaps The Covid can somehow be written into the story line, perhaps a super villain can be conjured up to create a unified distraction along with some enhanced misery to keep the serfs in line. Then again perhaps the Chief will just do what he is good at.. collecting his personal marbles, declaring bankruptcy and leaving someone else to further exploit the victims or help them as the case may be.
The only thing for certain is that its not over.

The future is uncertain and the end is always near.

Jim Morrison who died at 27 had lots to say, and he was for a UTE smart.

I am sure I might have posted it before but my fav line from him was not from a song.

" I dont know what the future holds, all I know is I am going to get in my kicks before the whole shithouse goes in up in flames"

Thanks for the reminder. Morrison is one of several who represents the start / coming to age of the current cycle with Trump a polar opposite destructive "genius" at the end. Hopefully the next cycle will not have to rise from the ashes.

Hi lagatta.....Thank you, it was a very quiet Pride Day, which was just as well because Seb and I were too beat to do anything. But I did have some time to do a little research on the the state of the LGBT movement and the bigots they are up against in Canada and all over the world, so the day wasn’t completely wasted....

Hi Jackie....Great comment. I agree with you Trump and the Republican Party can never be forgiven for their Nazi assault on America. You and I always knew what the beast was, but he somehow managed to hypnotize many people into believing he was just a corrupt pol, when he was much much worse. I have to admit that although I am a ferocious opponent of the death penalty, I sometimes fantasize about seeing Trump sitting an electric chair on the lawn of the White House. I know that’s bad of me, but Trump is such a ghastly human being he brings out the worst in everyone....

Hi Steve...I am a big fan of Jim Morrison and the Doors. The image of him dead in that bath tub has always haunted me. And because it was such a waste it’s one of the reasons I have worked to try to reduce heroin and fentanyl deaths in this country. I am putting together a playlist of songs for this pandemic, and I will definitely add a couple of Jim’s songs to the list...

Hi RT....nice to hear from you again. I hope you are OK. And you’re right, this horror movie may have started as The Amoral Real Estate Developer Goes To Washington reality show but it’s going to end very darkly indeed. Between his criminal indifference to the out of control Covid pandemic, and the race war he is stoking, Trump is such a damaged person he is capable of anything to try to avoid being defeated. I honestly believe that the next few months will determine the fate of the world, and I wouldn’t like to bet on the outcome....