The Ignatieff Ultimatum: The View From the Beach 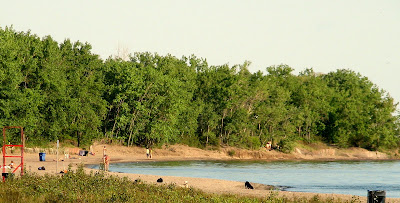 I finally got to watch Michael Ignatieff's gentle reminder to Stephen Harper. After spending the day at the beach.

And I'm going to give him an A for strategy, but only a C+ for delivery. And only because I'm feeling so mellow I'm prepared to ignore the way he looked down and closed his eyes and practically HYPNOTIZED me with those eyebrows.

But seriously... it's good to throw the ball into the Con court, but if you're going to threaten an election and you want Canadians to get motivated. You better remember that because Canada is what it is, at this time of the year...

You're competing with this... 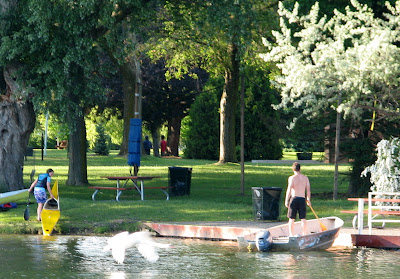 And the challenge is to make Canadians feel that even though our summers are so tragically short, and these are such worrying times, being bombarded by attack ads and screaming politicians coming at them from every direction is better than soaking up some rays and thinking of NOTHING.

Or just nice things. Like what shall we throw on the barbie tonight?

Which isn't easy. You REALLY need to connect....instead of just talking eloquently but boringly like Ignatieff did today.

For example....while it's good to bring in the EI issue it needs to be framed in a way everyone can understand. Like saying:

"What am I supposed to say to Fred in Fredericton, or Henri in Trois-Rivieres, or Rusty the Cowboy in Alberta? That they can't qualify for unemployment because in their areas unemployment isn't a PROBLEM?

"When everybody knows that it could happen to ANYONE in Canada no matter where they live? *points at camera* Like you and you and YOU"

Because that's the kind of thing that gets everyone's attention eh?

And as I said that's not easy in summer. 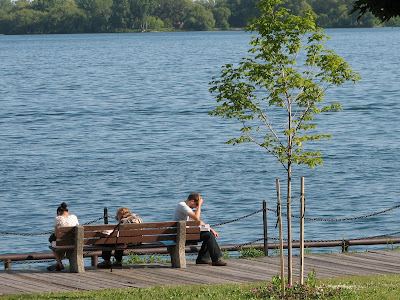 Because there are so many distractions... 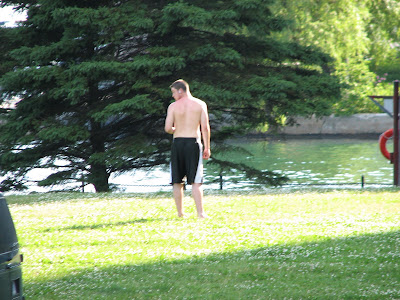 And then there's the isotope issue....he could have said something like this:

What am I going to tell Mildrid in Victoria? That she's not going to be able to have her cancer test because the Cons fucked up the reactor...and now they want to SELL IT ?

And BTW they think cancer is SEXY?

And when Ignatieff said that Canada was abandoning the world on the isotopes issue...which was excellent and the only thing my dumbo friends remembered...he could have said it even more forcefully:

"And what are we supposed to tell the world? That although we pioneered the technology we allowed it to rundown, we can't be bothered to fix it, and now we're giving up? And furthermore that Canada doesn't care if millions of people suffer. Because our BushCon government wants to sell everything off and use tax cuts to destroy the power of government.

"That's not the Canada I believe in. And that's why if Stephen Harper doesn't start behaving like a Canadian Prime Minister....and stops making us look like dumb redneck LOSERS in the eyes of the world, I will REMOVE him."

Which is something everyone can understand. Fuck that eh? Dumb maybe but losers NEVER.

But then what do I know? It looks like Great Desperate Leader used his extra hook-like appendages to add up what saying no would mean.

And has decided to bend over and take it.

Which will only reinforce the Canadian public's view of Harper as a weak leader. Excellent .

And BTW proves me right. Again. We WILL have a fall election.

Of course, I'm ready for an election ANYTIME.

But until it really happens. ZZZZZZZZZZZZ.

You know where to find me... 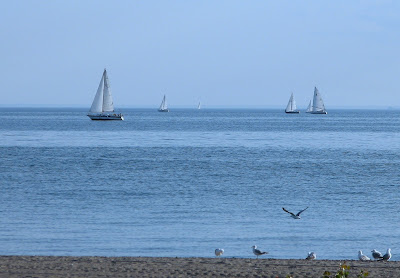 Iggy is not a leader and is playing the public. So Liberals are going for 72 confidence votes in keeping the Harper agenda on track.
thank goodness we have more meaningful and for real options.

Speaking of eyebrows - Ignatieff runs in good company with those eyebrows.

Ya, and Harper is again misleading Canadians - 90% of the funds CAN go through during an election.

Vacation? You can vote ahead by mail, or vote early. It only takes a few minutes to vote.

Look at Iran - we shouldn't be complaining should we. We are so spoiled and selfish at times.

Well that's what you get when you put a life-long academic in the job of Liberal leader. Too bad Bob Rae's salt-o-the-Earth communication skills couldn't somehow be morphed into Iggy. But there you have it. He doesn't do inspiration, any more than Harper does. What does this say of Layton that he can't come up the middle?

BTW - you show a real knack for effective political communications, Simon. I wonder if Iggy doesn't already get sound advice like this but just chooses to go the other way.

Hi Jan... you know I respect your position, which is one most of my friends share.But my position is this: I would welcome an NDP government, but since that's not going to happen I'll settle for a Liberal government supported by the NDP, because ANYONE is better than Herr Harper and his Cons...

Hi anonymous....I'm not putting down the way he looks. I would never do that. What I'm saying is that when he looks down or closes his eyes his delivery is less effective...

I better stop picking on phony Layton - I hear he's going to be a new grandpa and I hope all goes well, but he really is a jerk

Hi anonymous...as I explained in a post the other day, I'm hoping for a fall election because I believe that will be the best time to bring down the Harper regime.
So I'm just lobbying for that position.
But of course I'm not buying Harper's reasons for ducking an election. And if the progressive side has polls telling them now rather than in three months would be better I bow to their judgement.
I just want to make sure that when the election is called the Harperites are defeated.
As for the summer thing...well you know the weather does play a big part in Canadian life. And I think that this year it's more of a factor than ever because of all the stress around.
However, as I said in the post, I'm ready for an election ANYTIME...

Hi Scott...you know I love all the members of the progressive family.
My greatest dream is to see the left united, because then the Cons could be banished FOREVER.
I have to admit the NDP is my sentimental favourite, but as I told Jan a Liberal minority supported by the NDP to keep them from drifting further to the right would be OK for me, because we have to get rid of these filthy Cons.
As for the communication skills...I just want people to articulate the pain of millions of Canadians who are suffering because of this evil regime. Which means using words that make people feel as well as reason.
I think Ignatieff is a much better speaker than Dion, but like other lefties he is sometimes a bit too CEREBRAL.
Of course nobody can accuse me of that...and in the worst case scenario when both the Liberals and the NDP turn on me...I can always blame my shortcomings on too much sun... :)

Hi anonymous 12:36....as Saint Simon of the United Left...the one who gets stoned by both sides...I can't agree with you either.
No left/leftish party is perfect, but all of them are better than Harper's Cons. So I wish the left would stop fighting each other and concentrate on the REAL enemy.
I realize that my position is a lonely one and it won't make me popular.
But I'm pretty sure that history will absolve me.
It better.... :)