When the Fetus Fetishists are Homophobes 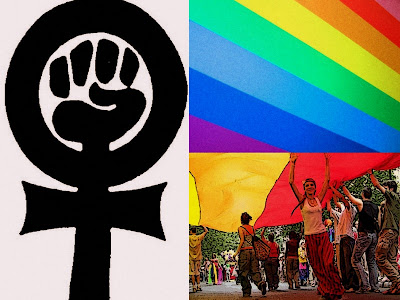 If you want to know why I am a feminist as well as a gay activist, it's not just because I love my beautiful sisters....and need them to save the world.

I'm not going to comment on drooly Julie's disgusting rant. I've heard it all before. Like this homophobic filth:

Why should any society endorse a movement that tries to recruit members, when the activity promoted actually causes disease?

When everyone knows that it's the crazy Christianist hatemongers who are diseased....riddled with syphilis of the brain and soul. Just like their deranged movement is riddled with TERRORISTS.

Which reminds me.... let's check out what Granny Hate had to say the day Dr George Tiller was murdered.

I just got an email from Operation Rescue that George Tiller, aka Tiller the Killer, was shot and killed while going into his church this morning. Tiller operated an abortion clinic in Wichita, Kansas and was known for his late-term abortions. Now Tiller has met his maker.

One person will be convicted for this crime, but I believe that a large portion of the responsibility for it lies with those who failed to serve justice and continued to allow Tiller to behave as if he was above the law.

But then let's not be too hard on Julie, because whatever hidden qualities she may possess, intelligence isn't one of them.

Not only doesn't she understand that Jesus is supposed to stand for LOVE not hate. She's too dumb or crazy to know what NOT to steal.

Which shocks me because how dumb can you be eh? And saddens me because Mark is my beautiful gay brother and he'll NEVER live this one down.

Which is why I am DELIGHTED that Julie has decided to join the gay pride festivities.

So July 25, let's take a stand - we Christians have been silent for far too long....Let's gather on the steps of St. Mary's Basilica and pray.We need to show this movement that freedom does not exist in surrendering to base sexual behaviour; freedom comes from living in the truth purchased for us by Jesus Christ who loved us to the point of death.

And so the gay boys can hear the wingnuts coming. And prepare a 21-Super Soaker salute. Because they deserve it eh?

And the really good news? Mark is still in shock, but his doctor assures me he'll make a full recovery, and be back at his blog today.

And I was born gay eh? So I get to hang out with all the best and coolest gay and straight people. And fight these Christianist Taliban FOREVER.

What more can a poor boy ask for?
Posted by Simon at 1:23 AM

In a way, I bet Mark's politeness made Dumbfuck Droolie feel all the more embarrassed to be caught stealing his artwork.

Can you believe the nerve of these people?? Arrgghh!!

hi JJ....yes I think you're right Mark's polite note was probably more annoying than my whole post. And in that he's more reflective of our community than I am. Because gay people have remained incredibly gentle and patient despite the hatred that rains down on them without end.
On the other hand...he's got TALENT so I have to compensate...:)
And as long as these hateful homophobes keep attacking us and all but calling for our extermination I volunteer to be the one who gets to give them the one-finger salute. And the only problem I really have is not to be TOO rude in case my mum reads my blog. But then she's a good Christian, and she doesn't like bigots either, so I'm hoping she'll forgive me. Right mum? :0

i first caught wind of mark's stuff being hijacked on JJ's site. mark's such a kind soul, he can't help being polite and walking the higher road that he's a good example to us all.

anyways, seems those fundies are all wrapped up in the same ragged blanket of faux christianity. fauxanity? obviously they are the decendants of the missionaries who first came over and conquered turtle island....cruel practises are still being initiated on the meek.

"yes I think you're right Mark's polite note was probably more annoying than my whole post."

Oh, but it was a good'un, Simon! Although I'm sure Mark's sharp little slap had more effect than my ill-tempered rant, I couldn't resist the urge to administer a ham-handed slap (more like a punch) of my own! How dare she? Really!

(PS, you are so talented too and your blog proves it!)

Alberta woman sentenced to life in prison for neglecting to request Dr. Morgentaler's assistance in killing of her own baby.

With prices for healthy newborn babies rising sharply on Canadian adoption market and supply dwindling rapidly, provincial government operated human trafficking industry refuses to face reality of unrestricted abortions in Canada and instead of calling for across the board abortion ban they declare war on Canadian baby breeders (unmarried teenage girls).

Just read recent news from Alberta: Woman gets life for destruction of children traffickers' inventory of human pets for sale. The fact that young girl tried to induce miscarriage during her pregnancy is used to prove her intent to kill her baby after her baby was born.
Let us get it straight: It would have been perfectly legal for her to have an suction curettage abortion procedure done by a mass murderer like a infamous Dr. Henry Morgentaler even few hours before she gave birth to her baby. That procedure most likely would rendered her infertile and made her into a paying customer of baby traffickers when she grew older, but if she tried to induce miscarriage just so she would preserve her fertility for better times it is used in court as a proof of her murderous intentions.

In the eyes of Alberta's Court destruction of children traffickers' inventory seems to be a very serious offence that calls for a very harsh penalty and as a result young woman found guilty of second degree murder got life sentence with no eligibility of parole for ten years. For comparison two young women in Ontario found guilty of first degree murder of their own mother were sentenced to a maximum of ten years in jail (after four years in jail one of them got recently released just so she can attend University).