Mike Duffy: You Know What Made Me a Partisan? 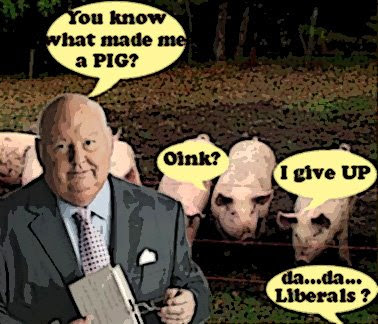 You know when the Con porker Mike Duffy was appointed to the Senate, I thought that was the last time I'd hear from him. Apart from an occasional oink and a burp.

But I guess that was too good to be true.

Duffy spoke at length about Liberal Leader Michael Ignatieff's ties to other countries.
He questioned if Canadians are seeing the real Ignatieff, asking, "Is he a multiple personality disorder or something? What is he?"

Duffy also took pointed jabs at other thorns in the Conservative political side, referring to outspoken Newfoundland and Labrador Premier Danny Williams as "that whack job over in Newfoundland," and Green Party Leader Elizabeth May as "Bucky the Beaver."

Which I guess is pretty funny coming from Puffy the Pig.

Duffy staunchly defended his decision to go to "the other side", saying he wasn't always a partisan while he was still working as a reporter.

"You know what made me a partisan? The Liberals."

Huh? Wot? He wasn't ALWAYS a partisan while he was STILL working as a reporter? Golly. We all knew he was a partisan hack but now he's finally ADMITTED it.

And BTW is that what passes for journalism at CTV News?

CTV Newsnet will run a statement saying it violated the Canadian Association of Broadcasters code of ethics within the next three days at the same time as the Mike Duffy Live program used to air, and again within a week.

You know I thought Bob Rae had the best line of the day, when he said Lisa Raitt probably left the secret documents at CTV's Ottawa bureau because she thought it was a branch of the government.

And who can blame her eh? No wonder the Cons want to kill the CBC.

As for Duffy....he was a lousy journalist. He's a pig of a Senator.

Throw him a whole BBQ chicken...or a bucket of chicken guts.

And oh yeah... ABOLISH the Senate.

Before he disgraces it further...
Posted by Simon at 6:00 PM

I agree with what you said, and particularly in abolishing the Senate.

"You know I thought Bob Rae had the best line of the day, when he said Lisa Raitt probably left the secret documents at CTV's Ottawa bureau because she thought it was a branch of the government."

At the same time, Bob Fife's reportage on the Lisa Raitt oopsie had a lot of what I'd term scathing kicks at the Conservative cans.

I sometimes wonder if the frontline observers are being muffled by the VPs backstage from any piece except fluffing Harper and are seething about it, even as they realize their market pond is shrinking.

Aside from Duffy, I mean. It's too bad. I really think news outlets would surge in audiences if there was actual reporting being done. People are starved for real information while being fed pap.

Hi Jan...yes we might as well abolish it, before the Cons try to reform it so they can weaken the power of the House of Commons. If the Senate was really a place full of the best and wisest old people in Canada I wouldn't mind it so much. But it's just a House of Pork so we're better off without it...

Hi Niles...I don't usually like to tar whole news organizations. And there are some good journalists at CTV ... as there are at the National Post. *choke*
But their behaviour with the Dion interview at a critical time in the election campaign was simply unforgivable.
And Duffy's performance was so partisan and it was sickening.
And I can't help feeling that some in CTV management are sucking up to the Cons so they can kill or cripple the CBC and leave them with no competition.
I hope I'm wrong, but sometimes I wonder...