Why Afghanistan is NOT about Women and Gays

It always amuses me when right-wing chickenhawks claim that our doomed mission in Afghanistan is all about protecting the rights of women and gays.

In the case of Afghanistan, in particular, this defeatism is grimly ironic coming, as it is, from a politician who postures as the champion of gay rights and feminism: But not for the presence of brave NATO troops, the country would fall into the hands of medieval theocrats who behead homosexuals and treat women like burka-clad dogs.

If they haven't been murdered or burned by their husbands...or burned themselves first. 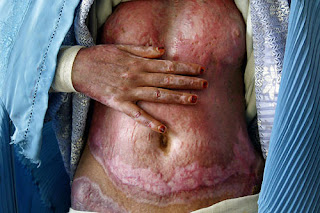 And the situation for gay people is also just as bad. Maybe they aren't having walls collapsed on them...or being thrown off tall buildings. But they are still tortured, killed and jailed. As our brave "liberators" look away....

But then in a backward, ignorant, brutal and corrupt Islamic Republic what the fuck do you expect?

It's a question of CULTURE. You can kill the Taliban for the next hundred years, but you CAN'T change that. The mission is doomed. We ARE just playing into the hands of the Americans. We ARE making Canada less safe rather than safer. We may have good intentions...but the road to hell is paved with them

As for the right-wingers who claim they care about saving women and gays. I'd take them a lot more seriously if they weren't the same crazy neanderthals who spend all their time attacking us.

“Disgusting, offensive, hateful, mean-spirited liberal-leftist homophiliac Christianophobes...turning the other cheek when people are executed in the Islamic world for nothing other than suspected un-Islamicness or for being female, for being gay, etc...

But here at home we're fascists....

Next thing I know, the Bizarre Sexual Indoctrination Schutzstaffel will be breaking down my door to take me away... stomp, stomp, stomp *yelling orders in German, door being broken* stomp, stomp, stomp... ‘You! kommen vith uz! ve teach you to vuck in der buttzen und you vill like it!'"

Cheering on the Harper nazis as they cut funding for women's groups...kill the Court Challenges Program.

And of course do NOTHING for gays. Nothing to stop the epidemic of anti-gay bullying in our schools. 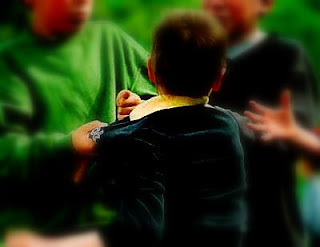 If you want atrocities, and crimes against humanity you don't have to look further than our own backyards...or schoolyards....or for that matter our native reserves.

So much for Canada as a champion of human rights...

That'll be the day I care about what happens in the barbarous and corrupt Islamic Republic of Afghanistan.

Until then FORGET IT!!!! Just SHUDDUP!! And when this bloody, doomed, multibillion dollar waste of time, energy, and Canadian lives is finally over.

Boy that just about sums it up. All the rest of the posting is unnecessary. Ordinary Afghanis deserve world support irregardless of the axes you are grinding in your own life.

Islam is trapped by its own dogma in a primitive and barbaric historical era. Its required actions and attitudes are simply incompatible with any but the one in which it was invented. (And it was seen as dreadful, evil and violent even then.)

Enlightened or advanced thought cannot be incorporated into Islam, because the tenets and dogma under which it labors are rigidly, determinedly, proudly, and definitively inflexible. The Christian way of living requires adherence to certain principles, like love, faith, hope and forgiveness. These virtues are manifested differently in different circumstances, and in different forms in different historical ages. And their interpretation can evolve while remaining consistent with their original intent.

What was seen as charitable in the 19th Century may be seen as patronizing in the 21st, and Christians can change the way they prosecute charity, in terms of real life circumstances. (In one situation charity may be giving someone a fish. In another it is withholding the fish, while teaching him how to fish. The underlying principle of charity is served in both of these seemingly contradictory behaviors.)

But Islam is not a collection of underlying principles. It is a collection of behaviors that must be done specifically as described, in all circumstances, no matter how grotesque and anachronistic the practice or repulsive the result.

There is no flexibility in Islam because it is not based on universal, timeless tenets, but rather on strict, rigid adherence to the literal words and behavior of one man, utterly divorced from his context of time and place.

is the system good anywhere? no. the purset form of democracy is the iroquois constituion (heh heh, gotta get my first nation promo in here)...if the world were to act in circle like the two row wampum.

2nd anonymous is a half-wit bigot, and that is being generous.

Judeo-Christianity and Islam stem from the same pile of influences...it's 6 of one, half-dozen of the other, and a few common nice things between them get get lost in the shit inherent in both systems, and in the minds of bigots like him/her.