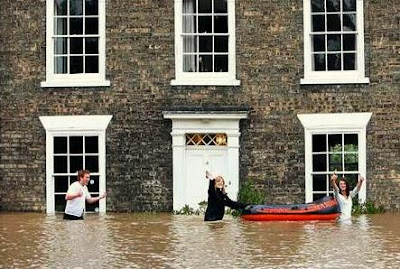 As you may know Britain is recovering from its wettest June on record, and cleaning up after some severe flooding.

Most weather experts....and sane people...are blaming the deluge on the reemergence of La Niña ....El Niño's chilly sister. And of course on a stationary low pressure system. But not the idiot bishops of the Church of England.

One diocesan bishop has even claimed that laws that have undermined marriage, including the introduction of pro-gay legislation, have provoked God to act by sending the storms that have left thousands of people homeless.

"The sexual orientation regulations [which give greater rights to gays] are part of a general scene of permissiveness. We are in a situation where we are liable for God's judgment, which is intended to call us to repentance."

Holy monkey poo poo!! Who KNEW we had such powers?

First we brought down the Twin Towers. Then we destroyed New Orleans. But at least they deserved it. There are not enough homosexuals in New York..... and too many jazz musicians in the Big Easy.

But why Britain? It's gotta be a mistake.... 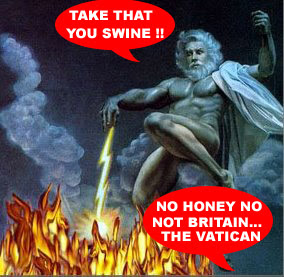 Hmmm....let's see.... how about splitting the Anglican Communion?

Anglican leaders have given the U.S. denomination until Sept. 30 to unequivocally pledge not to consecrate another openly gay bishop or authorize official prayers for same-sex couples. If Episcopalians fail to agree, they risk losing full membership in the communion.

Oh sure. Guess where most of the MONEY comes from? Let these nazis commune with the bigoted savages of the African Church. They'll be forced to hold cannibal fundraisers.....coz NOTHING hurts these crazy homophobes more than hitting them in their pocketbooks.

Or while we're at it...why don't we bring down the SoCon porkers of the Harper government ..who would impose a brutish theocracy on Canada if they ever got a majority.

If we were able to destroy the Roman Empire,incinerating the Neocon Empire should be a cinch. They are already bleeding from every orifice, so a couple of lightning bolts should just about finish them off.

Or....my personal favourite.... dare I hope that the bigot bishop decides to use a rowboat to visit his flooded parish...so we can conjure up a violent storm out of nowhere...and deposit him head first into the water.

So he can wash the fecal matter off his filthy body....or even better drown in his foul muck. Glug.Glug.Glug.

But seriously people .....how much MORE will it take before people realize that religion is a monstrous fraud? And we need that hatemongering ju ju monkey nonsense like we need a hole in the head.

Accusing gay people of hurting others when they are the ones who are being hurt by these bigots is TOO disgusting for words. And I'm not the ONLY gay blogger who feels that way. So does Canuck Attitude.

But as I've always said..... give these Christofascists, homophobes, and fetus fetishists enough rope.

Won't that be a beautiful sight?