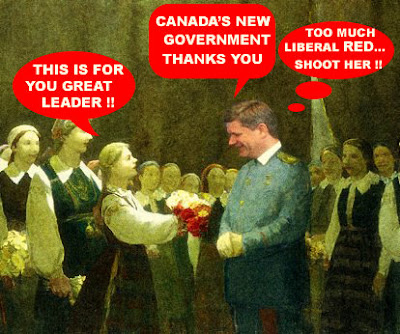 I've been calling Stephen Harper Great Leader, or Great Fat Leader , or Great Fat Chickenhawk Leader for a long time. Not just because I relish ANY chance to insult him. As any good Canadian should.

But because I always KNEW he was living in some kind of sinister authoritarian fantasy world, and was secretly modelling himself after some kind of warlike tyrant. Like wonky nerds usually like to do.

The funny thing is I always thought that with the absurd banner of Canada's NEW Government....his funny costumes... and his fat belly..... it HAD to be Benito Mussolini. Who knew it was really Stalin?

Months ago, I quoted a Conservative source, who said that Stephen Harper's political mentor was Joseph Stalin. Harper was fascinated with the Russian dictator, had read all the historical literature. Quite a unique circumstance to have the leader of a democratic nation, who rose to power through a supposed egalitarian movement, seemingly curious about a ruthless dictator.

Unique yes....who could EVER guess that the crazy neocon had a secret crush on the killer commie Uncle Joe?

But not surprising. The extreme left and the extreme right always meet up in a place called Fascism.

But don't panic Canada!!!!! We may be as dumb as spoons for giving him Harper the reins of power. But there are some signs that the country may be waking up from its Big Sleep. Even our chickenshit media is starting to notice that the tyrant has no clothes. And that Great Fat Leader is really weird.

Mr. Harper has a style, and he's sticking to it - the most controlling, stifling, rigid style of any prime minister in memory. He's got a formula, and he's also sticking to it - short speeches, no spontaneity, tight scripts, rehearsed political choreography, utter discipline within the ranks, media kept at a distance. It's all about Him.

.... to say that power is centralized in the Canadian political system is to repeat something every student of government understands. But at least by degree, and arguably by much more than by degree, this is the most centralized, controlling, scripted government Canadians have seen in their lifetimes.

Oooh boy.... And here am I thinking that being a graduate of the sinister Calgary School, a secret religious fanatic and member of a homophobic Doomsday church, who prefers the U.S. to Canada, and lies ALL the time... was bad enough. Now this? Now Stalin? Oh no. Say it ain't so Joe.

Anyway.....in the rubble of our own stupidity ....the good news is that if Harper and the ReformCon Party become one... if and when the crazy tyrant is toppled... the Cons will bite the dust too. For a generation.

The bad news is that waking up from the Big Sleep comes too late to save our troops in Afghanistan. Because too many Canadians failed to see the warning signs. Failed to speak out when Great Fat Chickenhawk Leader said he believed that having his own people killed only makes them stronger. Just like Uncle Joe did....

He even mused that the deaths of Canadian soldiers were a boost for the military -- cathartic after years of not being able to kill or die like real soldiers. "I can tell you it's certainly engaged our military. It's, I think, made them a better military notwithstanding -- and maybe in some way because of -- the casualties."

Now we're reaping what he sowed.... 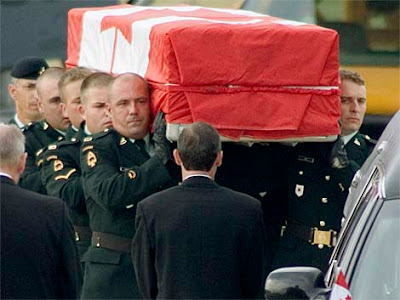 It's too late for these brave Canadians. But the rest of us are running out of time too. Great Fat Leader NEVER fooled me.....except for his crush on Stalin. But how long will it take before most Canadians realize that we have a fucking MANIAC for a Prime Minister?

And that even in the land of the bland .....where passion is a fruit....where these things NEVER happen...a monster is a monster.

No suprises in that article, eh?

I turned my maple leaf upside down when the election results started getting obvious...it feels strange when I see one right-side up now.

Hola Amigo!!! No there aren't any surprises...I just wonder why it's taken so long for Canadians to connect the dots and realize what kind of a weird and crazy guy Stephen Harper really is.The evidence has been there for years...but as I said...I think many Canadians are dangerously naive. They honestly don't think that someone that crazy could be Prime Minister. That something that awful could REALLY happen here.What a way to lose a country. Not with a bang but a DUH?

THanks. Took forever to get Blogger to accept a damn picture...this one's from a bunch of portraits that were taken as studies for a 200-lvl drawing class. I thought about deleting it then played with a Photoshop filter I found called "Luce" and decided to keep it.

Unless can west news have totally screwed up their paragraph order Conservative Senator Hugh Segal is the one who noted that Harper has "read and Mastered" the biography of Stalin (and copies his leadership style too). Who in their right minds would vote for a guy who models himself on Stalin? Does nobody in Canada know their history? Look how far down the road to one party rule we have gone. This might be the last election we ever have.