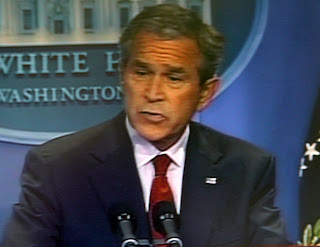 I watched George Bush this morning trying once again to turn Mission Accomplished into Victory Is Just Around the Corner..

And I've never seen anyone sound so optimistic.

U.S. President George W. Bush said Thursday he is among those who consider a new mixed-results report on Iraq's progress in meeting U.S. goals to be "a cause for optimism."

And look so beaten.

As if after more than four years of war...and more than half a million dead, a month and a half is going to make any difference

But that was until I read that the British troops in their Alamo called Basra have a new and deadly weapon. 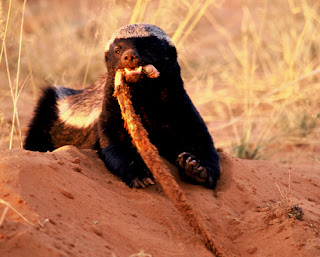 British forces in Basra, blamed for a host of ills from militia turf wars to rising Iranian influence, are being held responsible for the latest danger to strike the city – a plague of giant man-eating badgers.

Whoa!! I don't know what the Geneva Convention says about that....but it just might work.
I still don't think it would be as effective as riding into Basra on the back of an army of giant pigs. But if it can eat snakes AND cows ......gobbling up the terrorists should be a cinch.

Which made me wonder whether the Americans might have something up their sleeves with their new Killer Puppy Program....

Nah. On second thoughts I don't think that one is going to work. It's too much like the ORIGINAL plan.

You know....First you raise the hopes of desperate Iraqis that things are going to be better. Then you tease them by keeping any progress out of their reach. Or not giving them enough of ANYTHING. Then you torture or kill them....or just treat them like....um.... dogs.

And then you're surprised when those ungrateful Iraqis bite the hand that's killing them.

Those dirty yankee bastards. Do you think they'll ever realize why they LOST?

As for the little honey badgers.....they say they are the most fearless animals in the world.

Do you think I could train them to attack homophobes? If so I WANT one.

If those hatemongering snakes think they've seen a surge.

Me without cigarettes is the most fearless creature in the world, I seriously scare the shit out of people.

I’ve been noticing a lot of chatter to the effect that this could be another 911 type summer. I’m not sure if it’s Bush using the only trick he knows or if they know something and are going to let it happen so they can say I told you so.

Either way it’s another Bush failure.

badgers may work....jj posted about porcupines in , hmm, i think it was isreal, who are chewing through wires of equipment and such.

what are the natural predators of chimps?

Awwww! That vid was great!

Hey Bruce!!! So you are still off cigarettes...good for you. But aren't you supposed to get less grumpy as the weeks wear on? :)
As for Bush all this Al Qaeda chatter scares the shit out of me. They seem to be inviting the terrorists to strike. I believe 911 was for real...but I'm going to take a VERY close look at the next one....

Hey Scout!! I don't know what the natural predators of chimps are...probably other chimps.
But now that they've discovered these giant lion-eating chimps deep in the African jungle...I'm sure the Pentagon is really interested in their genes... :)

Hi JJ! That poor little puppy that has probably had to fight for every scrap of food. You know the first time I watched that video I was angry because I thought the soldier was teasing the pup.
But then I watched it again and I thought WTF at least he cared enough to stop and feed it...in a cruel world every little gesture counts. Although I still would have treated the doggie better... :)