The Private and the Brigadier 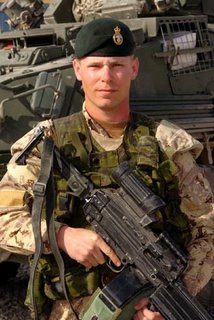 I see we lost another soldier in Afghanistan today. A good one too.

Pte. Robert Costall was absolutely convinced that what we are doing there is the right thing to do. He wanted to make a difference. He had a wife and young baby. But he was calm before he left on his last mission. At peace with himself.

He fought bravely to defend his fellow soldiers. He was only 22-years-old when he died. I'm impressed by that kind of idealism and bravery. But I'm not surprised. There are a lot of good ones over there.

What stuns me is the strength of their loved ones. The fortitude of these military families. The way they deal with their loss. I should know better. I think you really have to be one of them to understand what that's about. They're going to need every ounce of that strength to get them through the next few months.

In a few weeks the snow in the mountains south of Kandahar will start to melt, and groups of Taliban will start leaving their sanctuaries in Pakistan, and moving down the passes into Afghanistan. We can expect more battles like the one where Pte. Costall died. And a steady trickle of casualties, sometimes exploding into a stream. I hope Canadians won't be panicked by that.

And that the debate or national discussion we need to have won't be about casualties, but about whether we're doing the right thing. Like Pte. Costall believed we are.

In the meantime please excuse me if I celebrate this latest victory over the Taliban.

You know how I feel about them. Anyone who beats, tortures, and executes women for "crimes" like leaving their husbands. Anyone who bombs schools so little girls can't be educated and free.

Anyone who murders gays for who they are by collapsing walls on them. Any filthy beasts like that deserve to die. The more of those "martyrs" the merrier...

Like this British war hero who led a group of Canadian soldiers into battle fought his war. 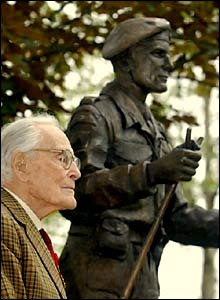 Brigadier James Hill who died today led the Ist Canadian Parachute Battallion in some of the fiercest fighting of the Normandy invasion. The Canadians would have followed him to hell and back. Not bad for a Brit.

And what a soldier too. Fighting on with half his ass blown off. Or approaching young soldiers cowering under fire, gently poking them with his walking stick and telling them "Son, we've got to do something about this."

As I said before about military families maybe you just have to be one of them to understand what that's all about.

Brigadier Hill lived to the ripe old age of 95. Private Costall died at the too young age of twenty-two.

But if I could I'd say the same thing to both of them.