Spring Teases and the threat of Armageddon 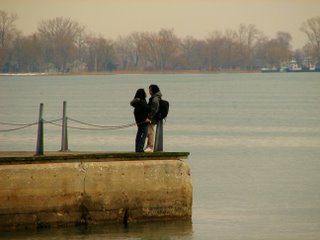 It was a balmy weekend in Toronto. People were out in droves, strolling around, shopping, or just getting friendly. I wish I could have enjoyed this little Spring tease. But I couldn't shake this bad feeling. This sense of impending doom.

Maybe it was just Luna's horrible end. I thought it was a really bad omen. Everyone knew what had to be done to try to save the baby whale from himself. But nobody did anything, so now nobody is surprised that he's dead. We just let it happen. Like so many other really bad things these days all we could do was watch.

Watch helplessly as everything escalates out of control from the state of the planet, to the insanity in Iraq, or the bird flu. It's still spreading but we still don't have a proper plan, or like the Americans enough ventilators.

What a way to go. Gasping for air like fish on a beach. Hoping for someone on an overused ventilator to hurry up and die. Or if you actually get one, hoping your relatives can hold off all the others trying to pull your plug. Although look at it on the bright side. Now that the conservatives are in power you can always buy your relatives AK 47s.

Anyway, as you can imagine, all of this weighed heavily on my mind, as I wandered through the crowds today, down the boardwalk with my dog. But it wasn't until I read this alarming prediction that I got really depressed.

Yikes! So it wasn't just me. Turns out the Apocalypse might be just two weeks away. Run for your lives people. This isn't Spring Break. It's the fucking Ides of March!

I mean what if it's true? Could the American Empire and the Global Economy be about to collapse? Could the Americans be picking a fight with Iran, just to try to sink that Iranian Bourse? It is kind of curious that this deadline coincides with the two others.

Hmm......It's enough to make you want to head for the hills, or reach for some comic relief.

Luckily we live in Canada, where we may be running out of things like brains, vision, and hope, but we still got plenty of that. Silly little stories like the Emerson Affair, the Shapiro Affair, and this one.

Can you imagine? What a scandal. What does it say about our new Prime Minister? I know he's acting like a dictator, making a mockery of our Parliamentary system. I realize he's preparing to murder childcare, give away the federal farm, throw more kids in jail for smoking pot, make poor people poorer, and wage war on gays and lesbians. In short: ruin our country, divide our people,and lead us all to disaster.

But all of that pales in comparison with this outrage. I mean really people... what kind of a man, would order a chef, to bury his pet cat?

It's not just horribly callous. Don't most families bury their own pets? But imagine what could have happened if Harper and his missus had ordered gopher stew that night....with their scalloped potatoes.
Doesn't he even know you never argue with a chef. Not unless you like something extra in your food. Like a gob of spit, or a piece of your pet cat. (sigh) Doesn't he know anything at all?

On the other hand, now that we know that Harper thinks chefs make good babysitters too, at least he doesn't have to pretend that his so-called childcare program is really good for children. And neither does anybody else. Whew! That's a relief.

(Drumroll) It's Stephen Harper's keep mum at home use the cash for anything you want (wink) (wink) baby (parent) bonus program! Hey we know what you REALLY need. Fuck those commie childcare spaces. Have enough kids and you can have one of these babies too!! 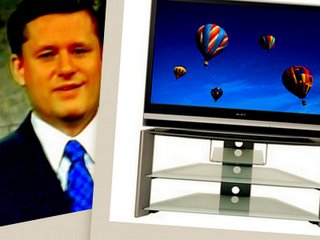 Yes that's all it is. A vulgar vote buying scheme, with a little bone in it for his religious base. Mummy stays at home. Daddy gets the dough. Just like God intended. Amen. Now get out there with the rest of them and shop until you drop!

The sad thing is it might actually work. Like it did for Mike Harris when he posed in a Consumers Distributing warehouse to show people what their tax rebates could buy. And a lot of people in Ontario went for it like a trout. And sold out their future for the sake of a few hundred bucks, or one of those newfangled VCRs.

It's taken years to repair the damage. And Toronto has never really recovered. It's just a shadow of the promising, optimistic city it once was. Before Harris and his neocon goons went to work.

And now it could happen all over again. To the whole country. Harper's so-called plan won't do anything for Canadian children. But the cash giveaway is so popular nobody even dares say it's bullshit. Not even the NDP.

See what I mean? It's just like what happened to that little whale. Everyone knows what the outcome will be. Everyone knows what we really need to do. But we're too visionless, selfish, stupid, and greedy to do the right thing. So we'll just let it happen. And let the kids and those who come after them pay for it later. Like they are going to pay for so many other things on what's left of our ruined planet.

Oh Yeah. Maybe we'll be lucky enough to escape the Ides of March. But I still can't help feeling that all those catastrophes raging out there are converging, and that sooner or later we'll be drawn into some kind of terrible vortex. And that in the meantime we're just playing with bubbles. Like Luna was before he was sucked into that propeller.

Look ...trust me.... I'm not religious. Unlike some people out there I'm not hoping for Armageddon. But like this guy I'm not prepared to take any chances either.

Great minds blog alike, Simon. As if that wasn't enough, say hello to Peevey Stevie. Only thing is, you really know how to piece it all together.