Indiana Harper and the Temple of Doom 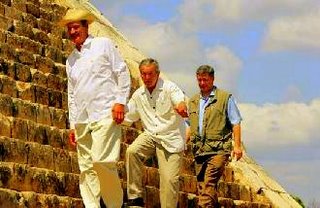 When I first saw this picture my heart skipped a beat. I couldn't believe what I was seeing. Was President Bush really about to lose his balance and bounce like a severed head down the steps of the pyramid? And was President Harper really getting ready to catch him?

Caramba. Swoon.What a moment that would have been. The photo op of photo ops. Indiana Harper saves President Chimp from certain death at the Temple of Doom. Would that wimp Tony Blair be jealous or what? Then I saw some television footage and realized they were only about three feet off the ground. The only thing Harper was going to catch was the real President's farts.

Although I suppose it also could have ended badly. Harper could have lunged for Bush, lost his own balance, fallen on him and crushed his hero like a bug. Which of course would have made him enormously popular not only in Canada and the United States. But in Europe, and Latin America, and in most of the rest of the world as well. Forget a Conservative majority government. Next time around Harper would be going for President for Life!

Although if he's going to win the support of most Americans he's going about it the wrong way with these ridiculous ads. Boots on the ground indeed. How about a boot in the ass for the idiots who dreamed up this embarrassing Yankee boot-licking ad? How low will these Harperites go to kiss Chimp ass? And how stupid can they be?

Don't they realize that Americans don't want Canada to be an armed Mini-Me.They want Canada to be a quaint, peaceful place where they can go to buy things cheaply, see mounties and museums, and feel a little safer from the threat of terrorist attack than they do back home. One look at that poster and any Americans thinking of coming to visit us this summer, will visit Vermont instead.
Or stay at home. 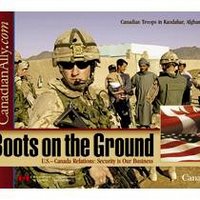 And who can blame them? That menacing soldier and that sinister slogan "Boots on the Ground" look like something out of V for Vendetta. What if some Saudi diplomat in Washington saw it? It's practically an invitation to Al Qaeda. The Canadian tourist industry should sue the Harper government for killing the season before it has even begun. If only the rest of us could sue them for making us look like fools.

Or like a bunch of pathetically insecure wannabe warmongers begging for love from the right wing losers of the Bush administration. Which of course, is even worse. You can't put a price on that kind of humiliation. Or misrepresentation. If the Conservatives keep up this banjo plucking Yankee love-in, we'll be the laughingstock of the entire world. Hitching a ride on a falling star like Bush and his discredited regime isn't only absurd. It's absolutely insane.

But that's Harper's problem. I'm sure Canadians are smart enough to draw their
own conclusions. Although I must admit I am frequently disappointed. Like I was today at Chichen-Itza. I was hoping it would be a little spookier. Because it's such a spooky place. On a moon lit night you can see a certain line where they stopped building temples and astronomical sites, and started building skull racks. Religion turned to mass murder as it so frequently does. A great empire descended into blood lust and began to decline.

I thought it was such an appropriate setting for the Three Amigos. Fox will soon be replaced by an anti-Nafta left-wing President. Bush is crashing to earth like a flaming meteorite. And if Harper keeps up this kind of Republican style Yankee ass kissing closed government he'll soon be heading for political oblivion as well.
But my real disappointment wasn't just that it wasn't spooky enough. Or the fact that Harper didn't catch or crush Bush. It was that he didn't stumble upon the Temple of the Phallus. It's just a small temple but it's got one of these sticking out of the wall.

How it could have been used to illustrate how we feel about Harper's plans to turn Canada into a Yankee loving Mini-Me. By adding a few simple captions.

Sit on it Mr President.