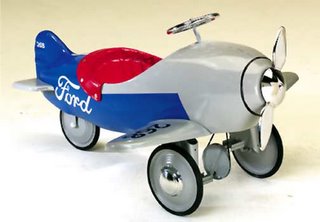 What an idiot I am. What was I thinking? First I write a post demanding that bloggers raise their standards so high, I couldn't possibly meet them myself. And end up looking like a blogging fool. Then I prove that I really am one! By trying to delete a post, and accidentally deleting my blog. Going. Going. Gone. Poof.

Any more mistakes like that and I'm going to have to give up the blogging game altogether. Before they take away my amazing flying machine, and force me to pedal the one above.

Oh well. Live and learn. I was sorry to lose those first forty posts, the election stuff, the homeless woman, the one about the heroes of Bomber Command. And of course, my amazing pictures and all. (sigh) It's going to be a long road back.

But there are some advantages to starting again from scratch. Now I'm a man of mystery again, a man without a past. I don't have to pretend I'm intelligent anymore, like all those other bloggers. I can just write what I want.

Although that may not be as easy as it sounds. The boys in the bunker are giving me a hard time. Farm Boy was delighted to see my blog just disappear. He thinks blogging is just a kind of dating game. Despite the touching look of concern on his angelic face, his laughing eyes betrayed him. He couldn't conceal his glee. He'd like me to do a travel blog instead.

As for Sebastien and his friends, they've got big plans for me too. They want me to turn this blog into a fighting gay machine. And hammer those bigots day after day. They claim they don't speak English well enough, or they'd write it themselves.

So I'm torn. I'm being pulled in different directions. I'll have to take some time to decide what to do. I do want to serve The Cause. But I also want to have some fun. Besides. right now I just can't be serious. Not after what happened to my blog. Not the way things are going in Canada these days. I'd stick out too much.

I mean the planet is going to rat shit, it's civil war in Iraq. Our soldiers are playing roadside bomb roulette in Kandahar. Stephen Harper is strangling our childcare plan. Ralph Klein is threatening to take a chainsaw to our medicare system. The dreaded bird flu is quacking at our back door.

But what are Canadians really concerned about these days? Why who killed that couple in Mexico?

I mean it's the Big Story. You can't get away from it anywhere. Everyone is talking about it. Everyone's got a theory.

One of my early ones was that we were looking at a case of double suicide. After 48 hours of Montezuma's Revenge, and that wedding banquet looming larger by the minute, I thought the unfortunate couple had just taken the easy way out. Worse things than that happen all the time in Mexico.

I must admit for a while I was stumped. But since I'm a huge fan of American Justice, that didn't last long. Knowing that dreadful place so well, and watching this clumsy coverup unfold. I can only conclude it must have been one of these peso sharks Maybe one of the ones they didn't fire? Or maybe it was just bandidos pretending to be the....er....good guys?

Whatever. It sounds like a case for our new Minister of Public Insecurity. I think he's admirably equipped for the job. 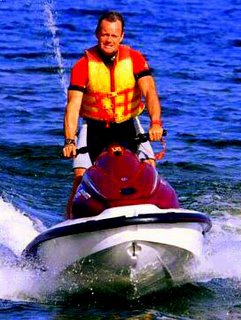 Yes. Doris can reassure all those anxious Canadian tourists in the Mayan Riviera with a commanding display of his Seadoo skills.

As for me, after what happened last night. Maybe I should go down there too, and provide even more comic relief.

As Doris scoots across the water, I can pedal up and down the boardwalk in my little Ford Flyer. Shouting "I'm an idiota, I'm an idiota. Otra cerveza por favor."

But at least I'll be in good company. With all the fuss about that silly little story.

I'm clearly not the only one.