Christians and the forgotten victims of Afghanistan 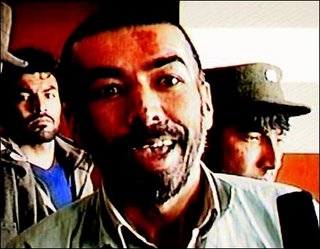 Uh Oh. It looks as if that Christian in Afghanistan might be executed after all. And I was so sure he'd be declared insane. I was in favour of that. It would be such a great precedent. And definitely better for him than getting hanged.

Although does that mean he'll be locked up in a loony bin full of Taleban and stoned to death there? Or allowed to wander unprotected through the grounds of that medieval insane asylum called Afghanistan like a marked man. So anyone can get him.?

I guess it does. In that case I'm not in favour of any of the above. I suggest we do the only thing that makes sense. Threaten to pull our troops out unless he's declared insane. And when he is, admit him as an immigrant to Canada.

If he isn't insane the religious fanatics of the Afghan Supreme Court will be really glad to get rid of him, before they have to kill him and lose their funding.
And if he is insane? Well he'll fit right in with the rest of us trying to survive March in Canada. Although it does mean Harper will get another vote.

Speaking of our President, I was glad to see to see him telling Karzai what to do. I'm sure that will please his base, they're so foaming mad they're ready to launch a jihad of their own. I understand why they're so angry. But why are they so surprised? The Saudis have been persecuting Christians for years.

I'm also glad that Harper called for complete freedom of religion. You know I consider religion a form of insanity. But everyone should be free to be mad! Including these Christian Peacemakers. I'm glad they're safe. I suppose we should also be grateful their little folly only cost one life.

It's a disturbing image isn't it? I wonder if Canadian soldiers ever provide an escort for prison buses carrying gay teenagers to jails where they can be raped and murdered? Or whether they look away, and laugh in their faces, like the Americans do in Iraq?

Maybe we're supposed to be grateful that they're not supposed to torture or hang them as they do in Iran. 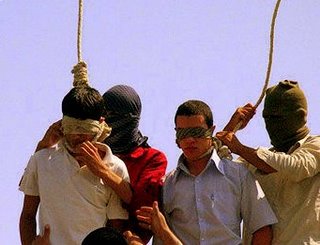 Well sorry we're not. We're always being asked to be grateful for the crumbs off the tables of the right AND the left. Fuck no. We expect President Harper to speak out against ALL human rights abuses in Afghanistan. Not just the ones that please his base. The wingnut bigots who are always baying for our blood.

But of course, that would be too much to expect from Harper. He believes that homosexuality is a behaviour not an orientation. Just like those crazy medieval mullahs. Never mind that a behaviour can be changed or criminalized. While an orientation cannot. If Harper really had his way he would strip us of all our rights, order us tortured with electric shocks, or thrown in faggot camps. But he'll learn his lesson soon enough.

Despite all of this depressing stuff, I still support our troops and our mission in Afghanistan. But it is getting harder by the day. Especially when I read stuff like this. I thought the death of that taxi driver was an accident of war. But treating ordinary Afghans with contempt, is a very bad sign if you are running a counter insurgency operation. It almost guarantees defeat. Three months from now that boy might be back with a roadside bomb.

Yeah our mission in Afghanistan is getting messy in a hurry. We really need a debate. Not to pull our troops out. We're committed for the next year. We need a debate so we can talk about why we're really there. And ask questions about a few other things as well. Like what is Harper doing about the plight of the other victims in Afghanistan?

I'm willing to give our mission a chance. I realize that bad things don't change overnight. But if the Afghan government doesn't rein in its crazy fundamentalists, and improve its human rights, then when our tour is up we should get the fuck out. We are supposed to be there to help the Afghans build a democracy, not to prop up a druglord theocracy. Or look the other way while women, Christians and teenagers are jailed or killed.

Fighting and dying to support that kind of government is worth nothing at all.

In the meantime I'll keep thinking of those young gay men arriving at that filthy jail.
Chained like animals, but still holding hands.

Who Canada and the world forgot about.

I've tried but have been unable to find out what is happening to gays in Afghanistan:
we know that many of the villages that canadian trops are visiting refuse to respects rights enough even to allow girls to be educated...
One can only imagine.
And honour killings, and...
you're right religion is a form of collective insanity!

We knew going in that we were working in a country that observes Sharia law, I hate it, it’s repressive and in my mind inhumane, but we don’t have a mandate to change that.

We went in for the right reasons, ousting the Taliban and capturing OBL (hah). I think our conscience is clear so far, we’re only trying to establish and maintain stability, although that might prove impossible.

Interesting that in the whole world a single Christian convert gets so much attention when it’s been common knowledge that Homosexuals get worse on a routine basis. If we didn’t have our troops there, we wouldn’t know so much about it.

I hate the situation, but it doesn’t hurt that we’re there. The whole world knows Canada as a compassionate nation and understands that we’re doing our part on the world stage. It would be a completely different matter if we joined in the Iraq war.

We can’t simply quit the game because we don’t like the way the other boys are playing. There’s a slim chance that our presence will give the people there some insight into our values, it isn’t much but better than nothing. All we can do is hold on and wait for our term to end and see if we should bother to continue.

Keep in mind too that Homosexuals are being ruthlessly persecuted in more places than that. We never hear about it because we’re not there, but it’s a very common practice in the world that fills me with rage and sorrow for my brothers and sisters and a huge sense of helplessness.

So I stick to my rights at home, it feels impotent in comparison at times but we need to show the rest of the world that it can be done at least here.

This is one of the best and most important commentaries I've read on any subject in some long while.

Good for you, Simon.

Doug Ireland at Direland has been documenting worldwide atrocities against gays and lesbians for some time now. His blog is an excellent source of information on this growing problem that is landing on deaf ears and closed eyes around the world. One christian is murdered and the whole world bows, thousands upon thousands of gays and lesbians are beaten, tortured and murdered in the name of sick religion and the world ignores it. I believe it is time to change that and government and the media need to take action on this scourge now.