Canada and the fate of the Quebec City Zoo 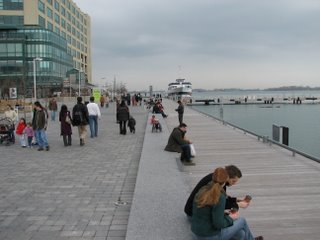 I haven't felt like blogging for days. I just haven't had the energy. Maybe it's the weather in Toronto, where Spring feels like fall. Maybe I'm just worn out from doing what you are supposed to do in Spring. Maybe it's just the state of the planet. There's a limit to the amount of bad news even I can bear. Oh no. Hang me kangaroo down sport. Don't tell me we're losing in Australia as well.

Then there was that morale sapping moment of national degradation in Cancun. When Harper kissed the Chimp's ass until it glowed red like the one on a baboon. And after warming him up, all but went down on him in his eagerness to please. Only to wake up the next morning, and discover that Bush's promise to treat him special was worth nothing at all. All Harper got out of his honeymoon in Cancun was a few condescending words about his "steely resolve." It may have been more than enough for our President. But it was way too much for me. It just made me want to vomit.

Then there was the frightening story of this Conservative wingnut, who managed to slip his muzzle, and go on a crazy rampage. Until he was felled by a tranquilizer dart from the PMO and locked up in his cone of silence again.

Mad Dog Mayes wants to handcuff reporters and put them in jail. Imagine what he might do to bloggers. Force us to stick to the facts? Oh no. How dull. Or put us in stocks and rip out our nails? Ouch. How painful. Can you imagine bloggers without nails? If that fop Russell Smith has it right... And we're all so silly and angry. Along with all the other rabid bloggers out there, I'll have to learn how to type with my teeth.

But of course it could get even worse. Can you imagine what could happen if these ReformCons ever get a majority? And all the muzzles came off at the same time. Snarl. Snap. Chomp. Any Canadians who haven't figured out by now what kind of a Red Riding Hood granny Harper really is, deserve to be devoured. I know that's harsh. But it's the law of the jungle.They're too stupid to be saved. We're better off concentrating on how to save Canada!

Although right now I have to admit, like millions of other Quebecers I'm more concerned about who is going to save the animals at the Quebec City zoo? 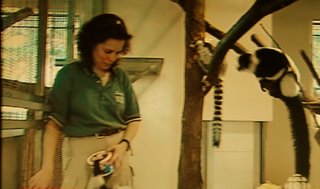 It's a sorry little story, of empty promises, political posturing, bad management, and appalling lack of imagination. A little like Canada these days.

I feel sorry for the animals. The old polar bear who is too old to move. The animals who nobody wants. The animals their trainers claim get a kick out of performing for visitors. Now all they're all alone in that silent and darkened zoo.

But it's not just the animals I'm worried about. That little zoo is a giant political opportunity waiting to be had. Bernard Landry once turned down $18 million dollars from the feds, because he didn't want the zoo to fly the Canadian flag.Or the red rag as he called it then. If Harper suddenly finds some money to save that zoo, he could win enough seats in Quebec to give him a majority. Laugh if you like. But I know television. Can you imagine what that photo-op would be like? Harper in that Indiana Jones vest, that old polar bear, all those pink flamingos, performing monkeys, and lonely lemurs. 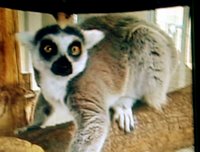 Not to mention all those grateful photogenic little kids. It's the kind of photo-op that could turn Sandra "Coca Cola" Buckler into Harper's Leni Riefenstahl.

Can't you see it now? Harper, not only the new friend of Quebecers, but the saviour of their animals too. That last one could win him a few seats in English Canada as well. Help soften his image. Make it look as if he really cares about people, even if he does have those scary eyes. That he's not just a control freak acting like a President. A bubble boy posing as a tyrant. Waiting for the chance to launch his Harper Revolution. And change Canada as we know it forever.

I realize there are a few other issues that might derail Harper's drive to a torch light victory parade and a New Order. But wouldn't it be ironic if the fate of Canada was tied to, or influenced at least, by the fate of a small Quebec zoo full of animals nobody wanted?

Or would it be? Maybe it would just be fitting. Just what we deserve for allowing a rigid ideologue with authoritarian tendencies from getting anywhere near a majority.

In the meantime, if anyone out there has millions of dollars please buy the zoo before Harper does.

If not I'll be forced to buy the polar bear to protect myself from those tory seals trying to drag me off to prison again. Or worse.

Cmon Big Boy. Go get em. Bite them in the ass!

As for Russell Smith. Yawn. What a bore.

He can just bite me.