Bush, Iran and the Big One 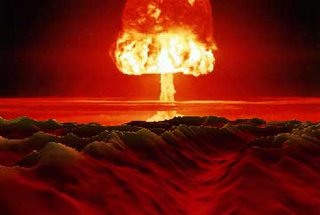 I see that Seymour Hersh has written about the how the Bush administration is apparently considering the nuclear option to take out Iran's Natanz Uranium enrichment complex.

I'm sure it shocked a lot of people. But from a strictly military point of view it's not at all surprising.The Iranians continue to reinforce not only the Natanz complex, but also their whole command and control structure. The window of opportunity is closing. The surprising thing is that the U.S. doesn't really have the right weapon to do the job.

There has been a lot of talk about the B61-11 bunker busting nuclear bomb.

It was supposed to penetrate so deeply into a target only a small nuclear explosion would be necessary to take it out. And so-called collateral damage would be limited. Unlike the Pentagon's previous Soviet-era bunker buster the B53 nuclear bomb that had enough explosive power to take out a city. And was so dangerous to handle it's a miracle one didn't go off accidentally. And take out one of ours. 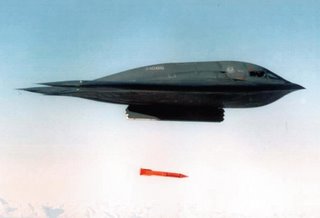 The problem is the B61-11 hasn't worked out that well. It hasn't ever been tested for real because of arms control restrictions. And in drop tests it hasn't been able to penetrate deep enough to guarantee success with a low kiloton yield. So if the Americans do use the nuclear option they would have to depend on the higher yield B83.

Which relies more on brute explosive power to collapse bunkers, and makes a hell of a mess. And a real big mushroom cloud.

If you want to know about the complicated and controversial history of American nuclear bunker busters, you can read a pretty good summary here.

The Pentagon is also scrambling to come up with better bomb that could penetrate so deeply it wouldn't need a nuclear warhead. If you're in Las Vegas in June and the ground shakes a bit, at least you'll know why.

But that bomb won't be ready for at least another year. And in the meantime the window of opportunity continues to close.

From a strictly military point of view it's a difficult decision. Do you hit the Iranian nuclear centres now with a massive conventional assault, or use smaller nuclear bombs that may not completely do the job? But would cause less collateral damage and be slightly easier to sell as a "surgical strike."

Or do you wait and have to use bigger nuclear bombs that would cause global radiation fears, or use new hastily rushed into production conventional ones like BIG Blu?

And how long can you wait before the Iranians have enough uranium to make a nuclear bomb or fifty dirty ones?

Or have burrowed so deeply underground that if they open a trap door they could emerge in Winnipeg, or under Lake Ontario. Where they could sink our pleasure boats with their miracle missiles.

It's almost writing itself like a script. The Iranians talk big, just like Saddam Hussein did with his nonexistent WMDs. The Chimp replies by talking about the Big One. It's crazy mullahs against the crazy christian, who according to Hersh, now thinks he's a Messiah. Forget about that bummer war in Iraq. That's Cheney's fault, not mine. My God given mission in life now is saving Israel and Freeing Iran!

Wow! I tell you something I'm not going to miss this one. And its equally spectacular aftermath.

God knows what's going to happen. Will it be a surgical strike? The start of the Real War on Terror? Or could it even be the beginning of World War Three?

It's going to be really messy. And it's probably going to end with a bang.

Welcome to the new nuclear age... 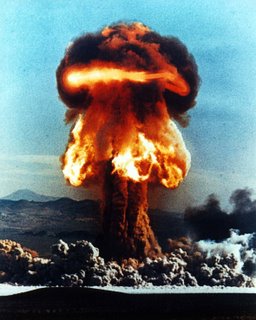