The Cons and the Rolling Blunder Invasion of Ottawa

They made it sound like Attila and his Con barbarians were about to invade Ottawa. Again.

This time riding monster bikes, instead of driving monster trucks. And with a new/nouveau slogan: "Freedom with Jesus."

But still determined to destroy vaccine mandates AND Justin Trudeau.

Fortunately, The Rolling Thunder Blunder invasion turned out to be a far smaller threat than some had feared. 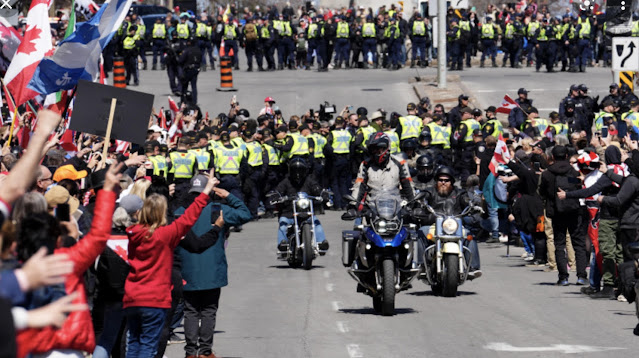 There weren't that many bikers, and they didn't stay  long.

Which was a relief after the horror of the evening before... 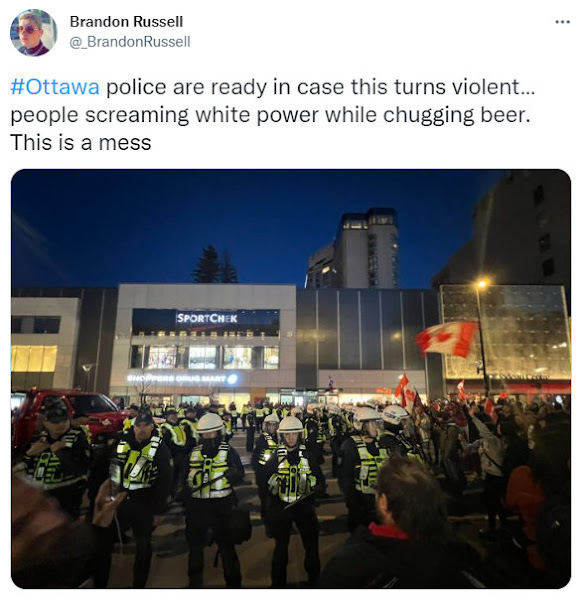 It’s déjà vu all over again:

(Who knows, maybe the situation is under control and I just can’t see it.) #cdnpoli #RollingThunder #Ottawa pic.twitter.com/bFpZroHlj8

Before going from bad to worse...

This video starts with a shofar, and ends with a brawl involving police.

And degenerating further into absolute madness.

Resident gets into a shouting match with a protester and police intervene to deescalate and get everyone to “simmer down.”

The clip is worth watching from start to finish to immerse oneself in the surrealism of this situation.#cdnpoli #RollingThunder #Ottawa pic.twitter.com/2vbuRyC7nK

I wasn't surprised that the Rolling Blunder rally came to resemble a scene out of the Con version of One Jumped Over the Cuckoo's Nest. 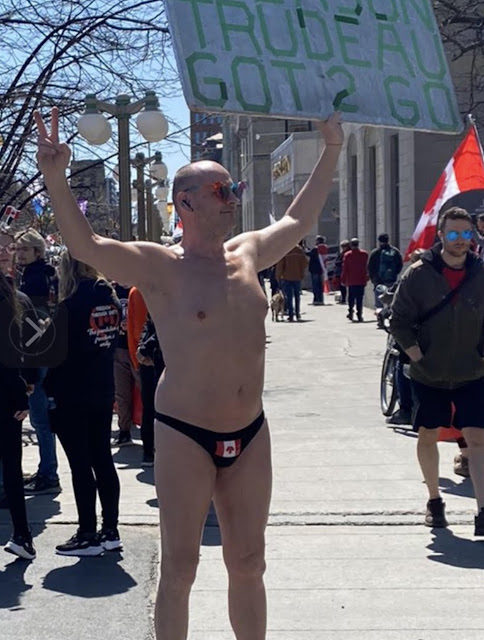 With so many kooky Cons like that one calling for Trudeau to be arrested.

But I was horrified to see Pierre Poilievre give the movement that terrorized so many Canadians, and tried to overthrow a Canadian government, another big hug.

I stood up for their right to fight for their freedoms against these ridiculous unscientific mandates.

End all mandates now. Join here, so you can vote, if you agree: https://t.co/d9I1ky9w2t pic.twitter.com/BsJ2GXAWDp

I also wasn't surprised to see Candy Bergen rising to the defense of her beloved hairy honkers. 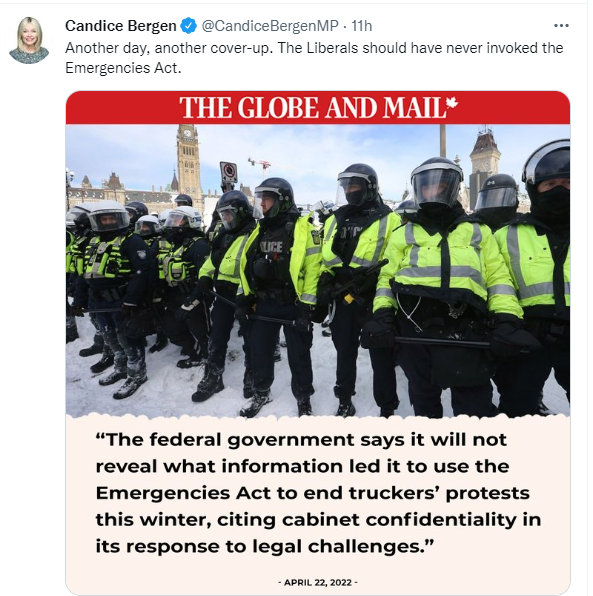 By trashing the Emergencies Act, even though it finally ended the insurrection, and gave the people of Ottawa back their city.

It's beyond belief, but it is what it is, and it is who the Cons are.

The weekend has only made it even clearer that they are the Convoy Party of Canada.

Not a Canadian party by any stretch of the imagination.

But a kooky fascist party if ever there was one.

And one that must NEVER be allowed to govern this country again...

It took Justin’s to war powers to hire a bunch of tow trucks. ITAC was rolling in their chairs over that one.

The Liberals ought to get busy compiling into attack ads the petabytes of material from Rolling Blunder and the Tonka Tantrum, spliced in with Pierre Pissypants' own hearty endorsements. If the feckless media won't do their job of properly highlighting that this is every bit a Conservative "rally" and what Conservatism in Canada represents, then it's up to the online samizdat (or what CNN calls "TruAnons") and the adept red machine.

My only hope is that 3 years of continued rage-baiting "Tuckers" them out, and not that one of them hauls off and does something really tragic. They're getting increasingly loud with that asinine QAnon conspiracy theory accusing PMJT of unspeakable things. A Scheer-Kinsella production, it should be noted, now being juiced by Bob Fife's resurrection of the zombie nontroversy that wasn't and which now has the swivel-eyed loons hollering that Trudeau should be investigated for going to "Pedo Island". You can't make this stuff up.

All I can say is gods forbid any of these demented orcs goes ballistic at the school where the PM used to teach (as our version here in the States did at Ping Pong Pizza), or anywhere else for that matter, to "own the libs". The cons deserve to suffer the political consequences for emboldening these freaks. But innocent bystanders don't deserve to be collateral damage so that Pepe the Hog to pick up the deplorables' votes. I don't know how they sleep at night.

Like the first protest they arrived on noisy oil powered machines as if the machines defined their freedom. Not an wussy electric vehicle to be seen anywhere. Rolling Blunder is a perfect name and signals the shape of the climate battle to come.They are certainly not going to give up their manly symbols quietly but are clearly on the wrong side of history.

I'm saddened that I have yet to see any egging videos. It's still early yet so who knows. Not that it was needed to make these clowns look any less offensive and the media would surely have framed it as the radical left attacking a peaceful protest by peace loving white supremacists. The mere presence of these pubic hairballs was enough though picturing some random Cletus with egg yolk in his beard and steam coming out his ears would have been hilarious. Regardless, witnessing this embarrassing spectacle would sicken any decent Canadian whose patience has run out with the overgrown crybaby convoy. And that's all they are. Loud, obnoxious, intolerant crybabies whining for attention. At least with actual babies, they cry, get over it and move on to the next toy. Then they grow up. But not the pubic babies. They cry, never get over it, never grow up, then move on to the next bawl-fest. My condolences go out to all their sane parents who probably never imagined their babies would turn out to be such insufferable assholes. I weep for you. Particularly on holidays and anniversaries.
JD

When the vehicles have to be removed by heavy lift tow trucks of which there are only a few, kept intimidated without the emergencies act compelling assistance, you have a problem.
When the vehicles could be lifted onto a pickup truck by 4 guys and driven away you don't really have the same kind of problem. Plus they can't really lock the doors and sleep inside the cab of the bike.

Hi anon@7:52 PM....The Emergencies Act were not "war powers." And the act was needed because the trucker terrorists were intimidating tow truck operators and preventing them from towing away the big rigs. The only problem I had with the Emergencies Act was that it wasn't invoked sooner...

Hi Jackie...The Con trucker terrorists don't seem to realize that they are providing us with the best possible attack ad material to use against Poilievre and other Cons. And all that Q Anon garbage will just be the cherry on the cake. As I keep repeating, we are not fighting a Canadian political party any longer. It's an American style Trump cult that is seeking to destroy this country, and fighting it should be one of the easiest things we've ever done. The Cons should take the Rolling Blunder farce as a warning, their time is up. I regret not having included some of the great signs from counter protesters like "Stop pretending your ignorance is patriotism." But I certainly intend to include them in the videos I will be making...

Hi RT...Good point. These degenerate Con carnivals will one day be seen as the last gasp of the fossil fuel era. I saw an interesting picture taken by the pollster Bruce Anderson in the north of Scotland. It shows an oil rig from the North Sea floating on a river, while on the banks a whole of giant wind mills are being assembled to be towed out to sea to form the largest floating wind farm in the world. The past and the future are on display together, and in Scotland at least the future is winning...

Hi JD...Well we can't have everything, because as you point out the Con media would have used any egging to try to portray the hairy honkers as victims instead of noisy fascists.I have had to restrain myself before when the convoy scum staged regular marches along the waterfront last summer, and I could hear them screaming "Freedom" right underneath my window. But the main thing is that the honkers are clearly losing support, and their latest Ottawa protest was a total bust. The police handled them so well that I understand that a number of other convoys waiting outside the city decided to turn back. And as I told Jackie, the sight of Poilievre egging them on will eventually leave that Con with egg all over his face...

Hi anon@12.56 AM....Yes, apparently hairy honkers had a plan to stage a diversionary protest to lure police away from downtown Ottawa, so they could send in more bikes and trucks into the downtown area. Sadly they forgot about police drones and helicopters, so that plan fizzled out. And as you point out, bikes aren't the best way to camp out. So fail again. The decent are winning the war against these would be terrorists, if only they were smart enough to figure that out...

The good news is that people are not born fascists; the bad news is that people with certain psychological profiles can be politically steered in that direction.
Its almost been 100 years since the last major fascist wave unleashed its destructive forces and afterwards psychologists studied the makeup of potential fascist supporters in the hopes that a devastating recurrence could be prevented. As time went on the possibility of resurgence seemed less and less likely so the studies were largely forgotten about. After all killing technology has advanced to the state where there is no winner takes all outcome so who in their right mind would support a fascist dictator. Memories of the horror have faded with time and it now seems that some politicians are willing to give it a try without fully understanding that once the forces are unleashed they grow into an unmanageable self sustaining ecosystem with a predictable outcome. Its seems that approximately 25% of a population are easy conversion targets while the remainder are distributed along a possible to impossible distribution. The attached is a simplified non political questionnaire to assess personal susceptibility. Scoring ranges from a liberal whining rotter to having trouble keeping lint off your black shirt.

They are War Powers, because that is all the government has left.

Most tow truck drivers despise Justin and his crew and it required basically a gun held to their heads to bail Justin out.

Don’t think Liberals will be showing their face in that quarter again for a long time.

JD,
There were plenty of people egging the Rolling Blunder yahoos. Just do a search for #Rolling Blubder eggs on Twitter, people were chucking them from balconies and such. Some people even came next door to get 5-6 containers, and they used them.

Not to change the topic too much, but Roe v. Wade being reversed, apparently, means SoCons in Canada are going to feel ennobled, which means Trudeau should have an even easier time in 2025. Poilievre is a closet Christo-fascist, he can run but he can't hide...

Hi anon@6:56PM….No they are not “War Powers.” They contain a clause that says the Charter of Rights must be respected. The Emergencies Act did have the desired. Tow truck drivers felt safe enough to tow away the big rigs, after having been intimidated by the trucker terrorists. And from interviews I’ve seen on TV, the tow truck drivers were happy and grateful. You Cons are always suggesting that the trucker terrorists represented other drivers. When in fact 95% of the other truck drivers were vaccinated and working, not just wanking off and blowing their horns. I know you Cons must go with what your cult leaders say. But at least try to inform yourself, instead of being so damn ignorant….

Hi Pierre, I did find it, thank you. One thrower's hair and lipstick had Easter egg colors so that was interesting.

I think The Beaverton pretty well summed up the inanity of the clownvoy part deux with this tweet.