The Con Debate and the Dismantling of Pierre Poilievre 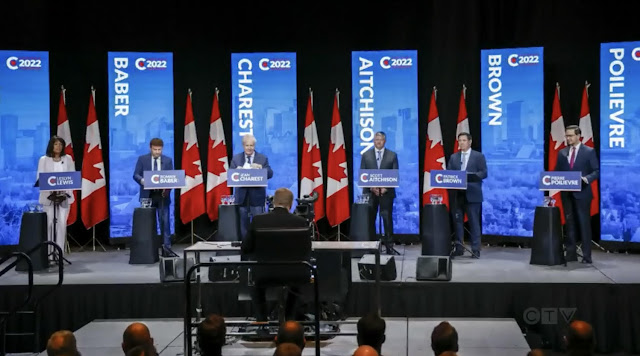 I had vowed not to watch another Con leadership debate again, but when the time came I couldn't resist. And I'm glad I did watch it.

Because it was the worst and most mediocre debate I've ever witnessed, more like a low budget game show than anything else.

And their decision to use a sad trombone to punish candidates for breaking debate rules, seemed only too appropriate.

And this from Pierre Poilievre was both outrageous AND hilarious.

Outrageous because having a Prime Minister remove the Bank of Canada Governor is a breach of convention that makes Poilievre look even more like a wannabe Donald Trump.

Or a ghastly fascist.

And hilarious because the Con man who would make bitcoin the solution to all our problems. 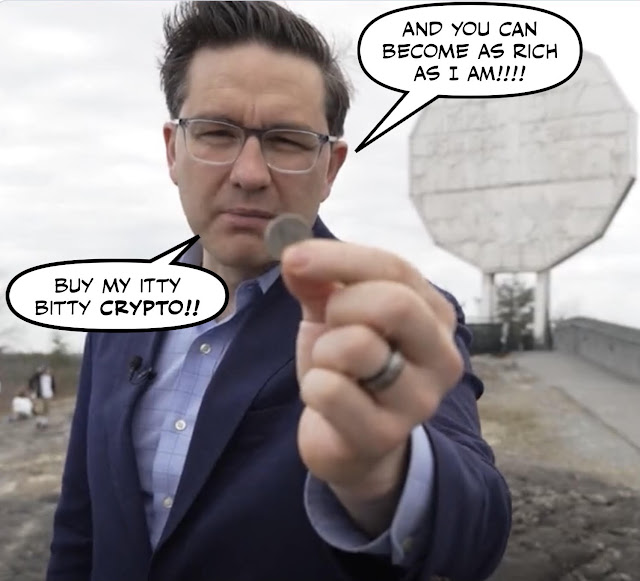 Is the same grifter who would make Canada great again. Or at least as great as El Salvador.

Poilievre was also asked what book he was reading, and seemed proud to say it was one written by the kooky Jordan "Lobster Man" Peterson... 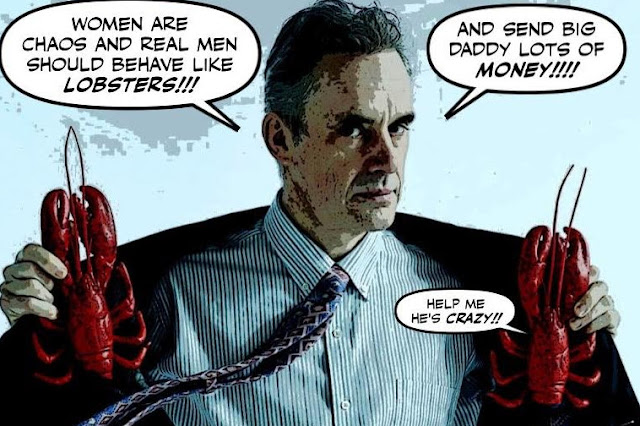 Which along with his continuing support of the terrorist truckers who held Canadians hostage for almost a month.

And their bitcoin connections.

Jessica Marin Davis is the president of Insight Threat Intelligence, a former senior strategist in Canadian intelligence, and the author of a book on international terrorist financing. She points out that of the money sent to the Ottawa convoy, the vast majority of the million or so via crowdfunding sites was frozen, leaving approximately $30,000. But over $830,000 came in via cryptocurrency.

Makes him too much of a freaky freak to even think about becoming Prime Minister. 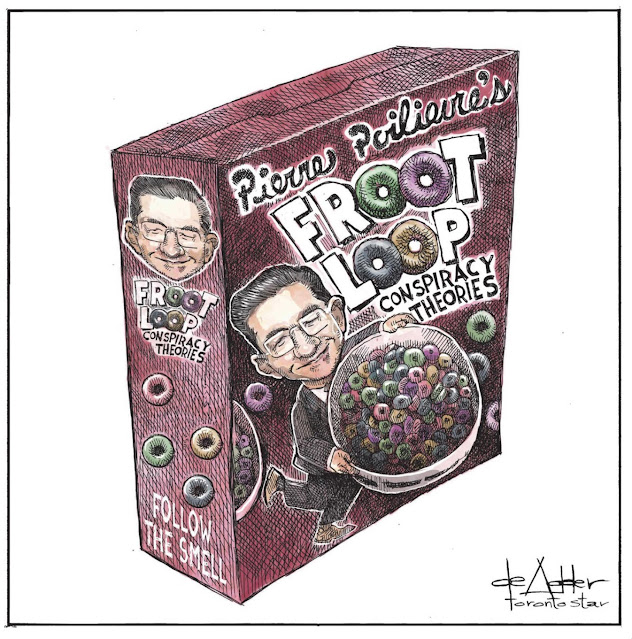 And follow the smell is right, because he really stinks.

As for the other leadership candidates, they had nothing to contribute to last night's debate. 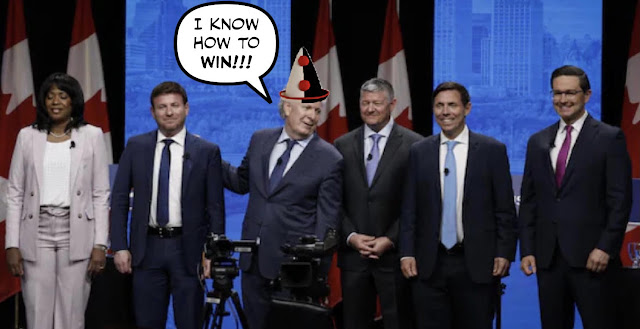 And who can blame them when the writing is on the wall?

The Cons are about to make the biggest mistake since the fall of their not so Great Leader Stephen Harper.

And I for one couldn't be more delighted.

Their next debate will be in French, even though most of the Con candidates don't speak the language. 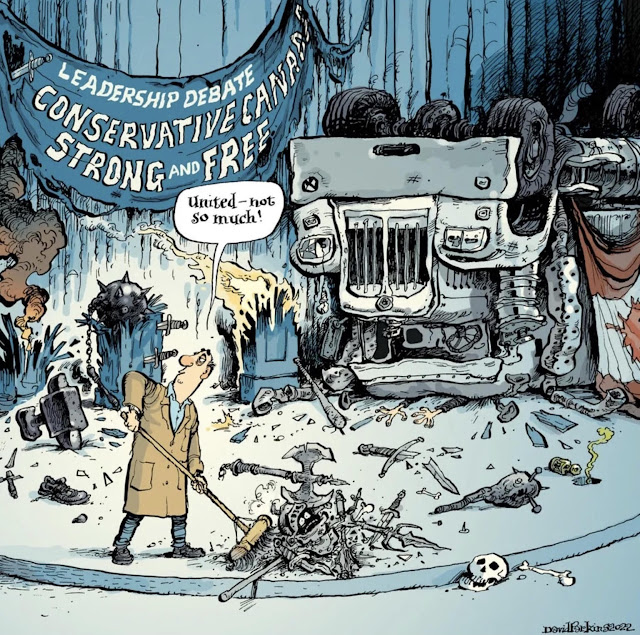 So it should be even messier than last night's pathetic spectacle.

And Seb and I who do speak French should enjoy it immensely.

Yup, Summer is almost here, and believe me I'm ready.... 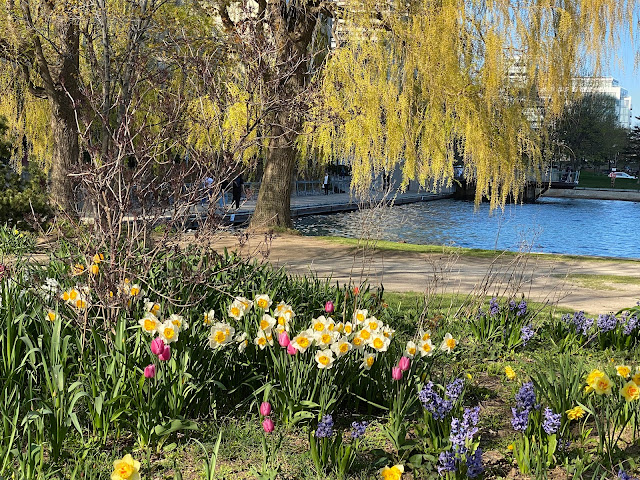 I did not watch the debate but just reading some potted bios makes one wonder how the Cons have have managed to decline so badly in the last few years. It is a pretty depressing lot and Poilievre reading Jordon Peterson seems to sum it up. I thought Peterson's main audience was 18--21 year old males who could not get a date. Still it is not Ayn Rand. Wait, he probably has most of Atlas Shrugged memorized.

BTW, how is Poilievre's French? He is from Alberta, apparently a Franco--Albertan family but I believe his riding is very Anglophone.

When even Kelley MacParland at the Post reads Skippy for filth, you know this guy is going to destroy the CPC once and for all. I guess we Liberals should give him a backhanded thank you for providing Katie and the LPC war room with more oppo material than their present computer hard drive storage can probably handle. More lobster rolls plz. Liberal MPs are already calling out his brand of angry nerd-Trumpism as having stoked the debased attack on Singh in Peterborough this week, and rightly so. Hopefully Canada can hunker down and survive the next three years of loud pigeon honking -- er, squawking -- and his right-wing base all hopped up on redpills, testosterone, ivermectin, and probably meth. The reward for sending the pigeon and his flock into permanent exile off Wellington Street will be the preservation of one of the few remaining Western democracies in this present age of sturm und drang. That's a lot better than imaginary Internet play money.

Hi jrkrideau....I believe Stephen Harper conditioned them all for failure, by spending ten years in power, and never allowing for a creditable list of those who might succeed him. Also, the growing strength of the religious right corrupted the party and did not allow it to keep up with the times. As for Poilievre's French, it's not bad. If he does become Con leader he will be able to hold his own linguistically speaking with Justin Trudeau. But his harsh tone will be a turn off for most Quebecers, so he will gain no advantage...

Hi Jackie....It is all coming to pass as I believed it would. Poilievre's manic campaign has crossed the red line and fallen flat on its face. He was always a cheap Reform Party ideologue, he didn't know how to moderate his image, and now if he wins he will be carrying his extremism on his back like a tortoise carries its shell. I can't imagine how Poilievre is going to survive the next three years. He'll never be able to tone down his extremism, and if he tries to do that the rabid trucker terrorists will make Bernier their first choice, and the Cons will go nowhere. Again. Pass the ammunition and give Simon two lobster rolls...

I wonder how Petey feels about crypto now that everything has come undone the past week?

Considering his unwavering stances, I figure it is about the same. He's probably moaning like the Black Knight from The Holy Grail, "It's just a flesh wound." Watching various minor "currencies" crash to 0 or near 0 (or major ones like bitcoin nosedive) does not improve my luna level of confidence in Pierre's economic acumen.

I got lectured by a Tory friend about Trudeau's lack of economic understanding (ie: high taxes on him and other high income folks.) At the very least he's not a dipshit libertarian bro betting on a developing technology that seems to be based on wasting electricity.

Simon my respect for you is surely visible in the count
that is given; I really like your blog and have a great admiration for you. We disagree on some things, but that aint no big thang in my world. Anyway I will comment again when All along the watchtower stop playing in my head.

PP at 57% is kaka for the party. It's proof positive that the Cons are truly fucked, in the head. There's no way in hell this country will ever vote in this moron as he keeps his hairy honkers in a perpetual rage and the rest of us sane folks shake our heads in disbelief and disgust. Fuck you, PP and fuck you to your turd world following.
JD

Hi Dan...It's not hard to know exactly what Poilievre is thinking about crypto right now. After plugging it every day for months, he has now suddenly dropped it like a hot potato. He's not talking about firing the governor of the Bank of Canada either after the beating he got in the media. So he's taken a real hit, and I doubt he'll ever recover. He revealed too much of who he really is, and blown his campaign right out of the water...

Poilievre is clearly romancing the conspiracy crowd. Although he is certainly no financial genius he is smart enough to know that this special group is large enough to swamp the leadership ballot boxes if he can convince them he is their Canadian messiah. Polling statistics show that approximately 25% of Canadians are into conspiracy theories in general. Although it is not known what percentage are into political conspiracies such as the one centered around the World Economic Forum, Soros and their elitist schemes to destroy freedom but only a relatively small percentage could completely swamp the CPC leadership vote. After all membership is only $15 and the conspiracy crowd is just begging to be politically exploited..... click for Freedumb...click to send your local MP a nasty message... click if PP is your man... click, click your way to euphoric freedom. At present the CPC has approximately 270,000 members eligible to participate in the leadership vote where as the overall conspiracy pool represents 7 million potential members. PP has nothing to lose as he is too toxic to win any other way but where does he go from there? Is he really stupid enough to think he can put them on a leash and let them only hunt when he gives the command.
Perhaps I missed it but strange why none of the other leadership hopefuls have asked PP why he had his name removed from membership in the World Economic Forum as well as his level of support for all those other global organisations of which Canada is a member. Its also interesting that unlike regular conspiracies where the event is real and the conspiracy is built around the cause and its explanation, for political conspiracies the event itself ( climate change / Covid 19 ) is also a promoted fiction. This is seductively empowering because eliminating the bad actors also disappears the non or deliberately created problem at the same time. No need to worry about cleaning up the mess the conspirators created, poof the promoted problem is gone, just like the central banker and inflation or Trudeau and Covid or Climate Change. If in the end the problem turns out to be real, then just like Matryoshka dolls there is always a conspiracy nested within a conspiracy to explain it.
RT

Hi Steve....Don't worry about it. These are stressful times, and it's easy to get carried away. You're welcome to disagree with me, just don't insult me, for my nerves are also on edge, and only summer can heal me. If you must have a song playing in your head All Along the Watch Tower is a good one. I recently listened to a podcast on the death of Hendrix, and what a tragedy it was. Imagine all the great tunes he could have created if somebody had been able to save him...

Hi RT....I saw that study on conspiracy theories, and I must say I was shocked. They've always been around of course, but the pandemic has sent them into overdrive. So I'm not surprised that a Reform Party baby like Poilievre should try to harness the ignorant for crasss political reasons. But as you rightfully point out, that may win him the Con leadership, but where does he, and where do they, go after that?
For the ignorance and the hate he is stirring up could have tragic consequences. When some doctors and nurse are afraid to wear their work clothes when they leave a hospital at night, you know we are heading for a very bad place...