The London Horror and the Con Hate Machine 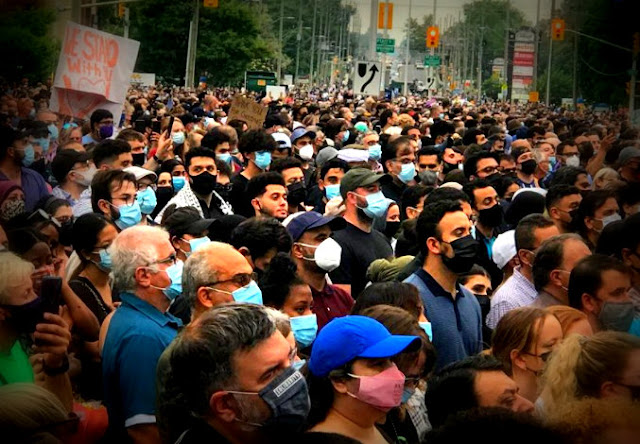 It was an incredibly moving vigil, as thousands turned out to honour that murdered Muslim family in London, Ontario.

They came together to vow that they would not let hate win.

But nothing could soften the blow of that bestial terrorist act.

And nothing could excuse the murderous hypocrisy of the Cons. 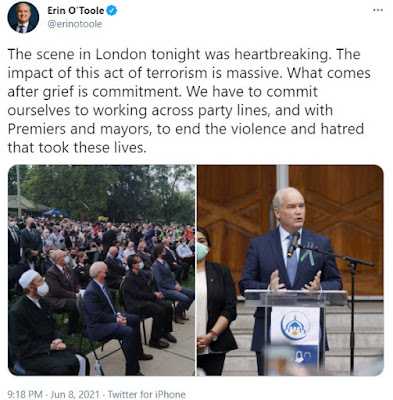 For if Canada has an islamophobia problem, and it does, the Cons are to blame.

Authorities are still deciding how to characterize the attack in London, Ont., earlier this week that killed four members of the same Muslim family. But for thousands of other Muslim Canadians, there’s only one word that comes to mind: terrorism. And while Prime Minister Justin Trudeau suggested that “Islamophobia has no place in any of our communities,” the unfortunate reality is that there are many communities in Canada where anti-Muslim bigotry is already firmly rooted. 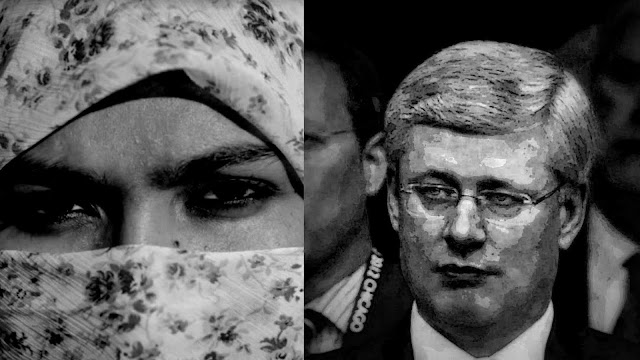 Those fires are still burning.

And not even mass murder could tame the bestial hatred of the Cons. 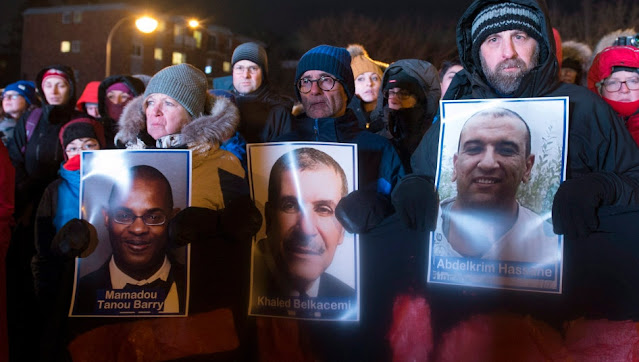 When the federal government tabled a motion to condemn Islamophobia in 2017 in the wake of the horrific Quebec City mosque shooting that killed six people and injured 19 others, all but one participant in the Conservative leadership race (Michael Chong) at the time voted against it.

Future leaders Andrew Scheer and Erin O’Toole openly criticized the motion, while former ministers Kellie Leitch and Chris Alexander appeared at a rally organized by Rebel Media and described by the Toronto Star’s Susan Delacourt as a “hateful free-for-all against ‘political correctness.’”

And they are still counting on our shabby Con media to keep those fires burning... 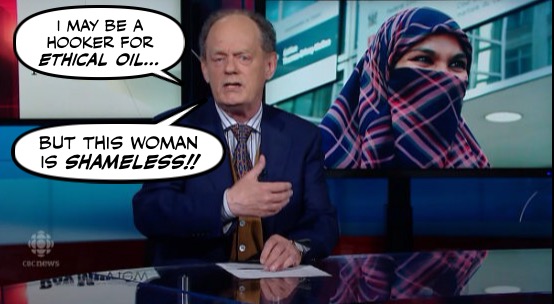 On Tuesday, for example, the National Post published an op-ed from Rex Murphy on the apparent problem of anti-white racism, which is a perfect example of where his priorities really lie. He’s hardly alone there, either. As Haroon Siddiqui noted in a 2016 speech to the Aga Khan Foundation, “hardly a week goes by without these publications finding something or other wrong with Muslims and Islam. These publications are forever looking for terrorists under every Canadian minaret.”

And feed their bloodthirsty base.

The fruits of this poisonous tree were on full display in the Twitter replies and Facebook comments of high-profile Conservatives this week, where their carefully crafted statements preaching tolerance and understanding in the wake of the London massacre were greeted with a torrent of anti-Muslim bigotry and whataboutism.

It's absolutely horrifying what the filthy Cons have done to this country.

Thank goodness we have a real leader who can reach out to ALL Canadians. 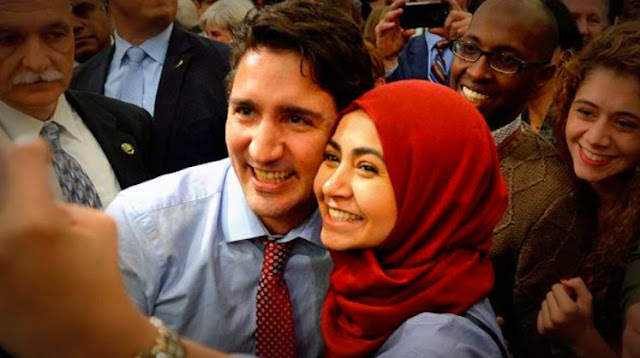 And is promising to do more to fight the hatred that kills.

Prime Minister Justin Trudeau has denounced the vehicle attack on a Muslim family in London, Ont., as an “act of evil.”

In the past few weeks, the Cons have been exposed as the party that would criminalize abortion, the party of homophobes who are trying to prevent the Liberals from banning the torture of young gay people.

Now all Canadians can see to what murderous place they would take this country. 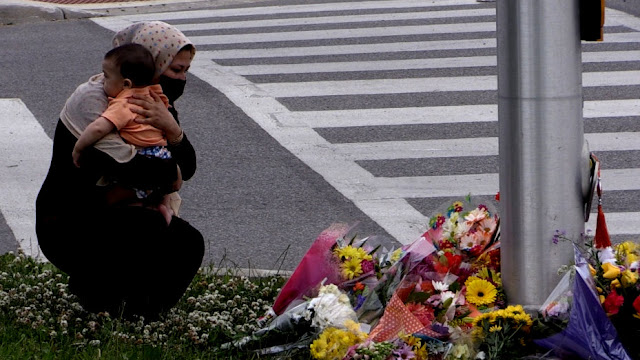 And why in the name of human decency.

The Cons must never be allowed to govern our Canada again...

I'm not sure what sickens me more. The sick, twisted punk who ran down an innocent family or the Cons who have the audacity to play the compassion card with their blood soaked hands. Once again the seeds of hate planted by Harper and nurtured by his bigoted party have reaped another bitter harvest. A terrorist attack that should never have happened but did because the Cons couldn't resist stoking the fires of hatred solely for political gain and to sate their own hatred by placing a target on our Muslim population.
You're so right, Simon. They can never be allowed to run this great country. They're only a few short steps behind the Trump party shitshow that's hell bent on turning the USA into an autocratic shithole and given the chance, they'll do anything to seize power here. The greatest terrorist threat in the US is from the right wing and without a doubt, the same applies here. So to Harper, Scheer, Leitch, etc. I say this, take your thoughts and prayers and shove 'em up your asses. They mean absolutely nothing.
JD

A nine-year-old boy is in critical condition and without a family because Canada's conservative establishment radicalized an angry white asshole, and has mutated into a cesspool of filth. Barbaric practices, niqab snitch lines, "goat sacrifices" at refugee hotels, countless shitposts about "Jihad Justin"... the list goes on and on.

The SOB himself is guilty of nothing less than a mass-murder terrorist attack, but it didn't occur in a vacuum. The environment that allowed him to thrive goes back to Harper and the white Con media fanning the flames of hatred or turning a blind eye and shrugging it off. All for profit and protecting their privilege.

Harper's IDU/GQP/Kochroach/Murdoch MAGA Cons and their Der Sturmer North propagandists are a domestic white supremacist terrorist group that needs to be disbanded and thoroughly investigated. They all have blood on their hands. They not only don't deserve to have political authority in Canada or any country for that matter. They deserve to be shunned as public pariahs for fomenting an agenda driven by hate.

I demand a full inquiry into the national security threat that is the Canadian conservative politico-media complex, with at least the level of intense prosecutorial fervor that was wasted for months on an idiotic conspiracy theory about Margaret Trudeau's emails. But god dammit, I wish Canadian media had someone who could be as blunt and honest with itself as the resident Ottawa bureau columnist for Al Jazeera. No wonder Harper's bigot buddy Bibi tried to blow them up. This man right here speaks brutal, unvarnished truth.

Fortunately, CBC does have Ginella Massa, who the hypocrite O'Toole and greasy snake Blanchet are no doubt cursing for her unfettered honesty. And Max Fawcett and Sandy Garossino are intrepid indie columnists, taking the rest of their industry out to the woodshed and unapologetically showing them full-stop what party traffics the most in hate. Diamonds in the rough, amid a field consisting mostly of stale pale male partisan hacks and a wannabe Con Senate bullpen.

I wrote a piece up this morning that declares Postmedia and the Globe are complicit in the Islamophobia industry. Never forget: the "paper of record" gave op-ed space to Ezra and endorses the hate party every election. They dragged Omar Khadr through the mud, and that hack Fife should have been shitcanned for the hit job he ran on Maher Arar. They're garbage and they should never be forgiven. They should be shut down, and copies tossed in the rubbish like the "polished" version of Epoch Times or Your Ward News.

If the roles were reversed, every damn lügenpresse outlet in the country from CTV, CP24, the Nazi Post, you name it, would be asking "where was he radicalized?" Cons would be demanding another parliamentary inquisition asking that same question, and insisting that "Jihad Justin" testify before the committee Crusades. But they're not going to ask that question this time around, because they won't like the answer: Want to know where he was radicalized? Look right there in your own fucking mirror!

If the killer has any personal politics, at the federal level he'd likely be a People's Party supporter and a Leafs fan.

!!
@stephenharper
Canada is a place of tolerance and pluralism. Cruel acts of racial and faith based hatred must be unequivocally condemned by us all. Laureen and I join our fellow Canadians in praying for the Afzaal and Salman families during this unfathomably difficult time.

Hi JD….it’s a hard choice, the murderous racist, or the Cons who would cheerfully murder this country. But I have to admit that the sight of the racist Cons pretending to be better than they are makes me want to vomit. Our grotesque media is doing nothing to expose that charade,so those of us in social media are going to have to work very hard to prevent the Cons from fooling the Canadians they need to win…

Hi Jackie….For as long as I can remember the Cons have been whipping up hatred against one group or the other. And Muslims were always at the top of their hate list. They fertilized the ground with their bigoted shite and now their hateful flowers are blooming everywhere. And you’re right, we’ve seen what the bigoted Trump years have done to the U.S. and we can’t allow the same thing to happen here. Or we could lose our country and never get it back…
And yes,both Seb and I have been cheering for Ginella Massa. She was a reporter for CP24 a local TV news channel, So we were delighted
when CBC hired her. She’s still feeling her way, and she’s way too nice for CBC, but we’re both sure she will be great…🌻

Hi Jackie....I forgot to mention that I read your latest post on your blog, and it is simply magnificent. Everybody should read it.

Your criticisms of the Cons are bang on as usual. And as a friend of Canada these are indeed the questions we need to answer:

What can we do to change things for the better?

When and where did things go wrong?

...and most importantly, why?

Hi John... The killer may well be a member of the People's Party. But the Cons are the ones who created all the wedge issues that created the toxic atmosphere that allowed hateful freaks like him to flourish and poison our country. And of course other freaks like Ezra Levant deserve a lot of credit...and a jail sentence. But as for whether he's a Leaf's fan, I'm a Hab's fan, and I wouldn't want the poor Leafs to suffer more than they already have....

Hi Unknown@7:16 AM....Please don't quote Stephen Harper on this blog. I read that on his Twitter feed, and I felt like vomiting. He was the one who lit the fires of prejudice for crass political purposes, so his hollow words mean nothing...

Immigration is an emotional lever that the Cons exploited to its fullest, especially during the mass exodus from the war torn middle east. Its especially sickening that Cons helped promote the wars and then sought to benefit by politically exploiting the refugees. That was then,this is now; the Cons never think about the long term effects of their actions. Much easier to blame some hapless individual and issue thoughts and prayers for the victims until the next time. With Cons there is always a next time ... such as mass immigration due to Con obfuscation of climate change and actions to help minimise the effects.